Another Reason for a Bitcoin Confidence Dip: Quantum Computers

With the SegWit2x project cancellation and the significant price dip, Bitcoin community confidence is fading away. Another notch on the process is a ‘future-posing threat’ for BTC network that could come real – Quantum Computers.

A Singaporean research team has identified ways in which the Bitcoin network could be vulnerable to quantum computer attacks in the not-so-distant future, publishing their findings in a paper aptly titled, “Quantum attacks against Bitcoin and how to protect against them.”

“A particular level of risk” – could be called upon virtual currencies by a “sufficiently large quantum computer”:

“We find that the proof-of-work used by Bitcoin is relatively resistant to substantial speedup by quantum computers in the next 10 years, mainly because specialized ASIC miners are extremely fast compared to the estimated clock speed of near-term quantum computers.”

“On the other hand, the elliptic curve signature scheme used by Bitcoin is much more at risk, and could be completely broken by a quantum computer as early as 2027, by the most optimistic estimates.”

The threat, then, is that quantum computers’ incredible brute-force computing power could be used to gain +51% dominance over the Bitcoin network’s computational power—a hijacking, as it were.

A crucial feature of Bitcoin is its security, but there is a problem on the horizon, thanks to quantum computers. https://t.co/H5XCQrW3qT

Just to keep in mind as an example, in the graph down below – in blue the HpS [Hash-per-Second] of Bitcoin network and in read the hash power of only a single [theoretical] Quantum Computer. 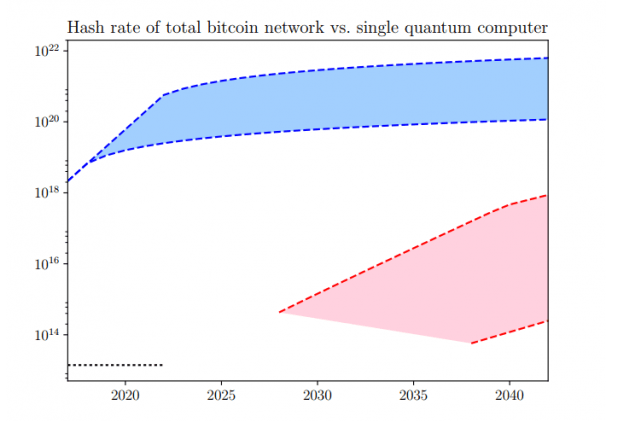 The researchers’ counterargument against megacomputers vs. Bitcoin boils down to incentivization—an age-old concept implemented to ingenious effect by Satoshi Nakamoto.

In other words, Proof-of-Work (PoW) miners are incentivized to secure the network. They’re not incentivized to sit back and do nothing while their prospective earnings are threatened. They’re highly economically motivated to use increasingly specialized mining rigs, if not quantum computers themselves, to defend the network from attack.

Very attractive [future] protocols to be applied could be other PoW projects like Daniel Larimer’s innovative Momentum as a ‘speed reply’ against QC.