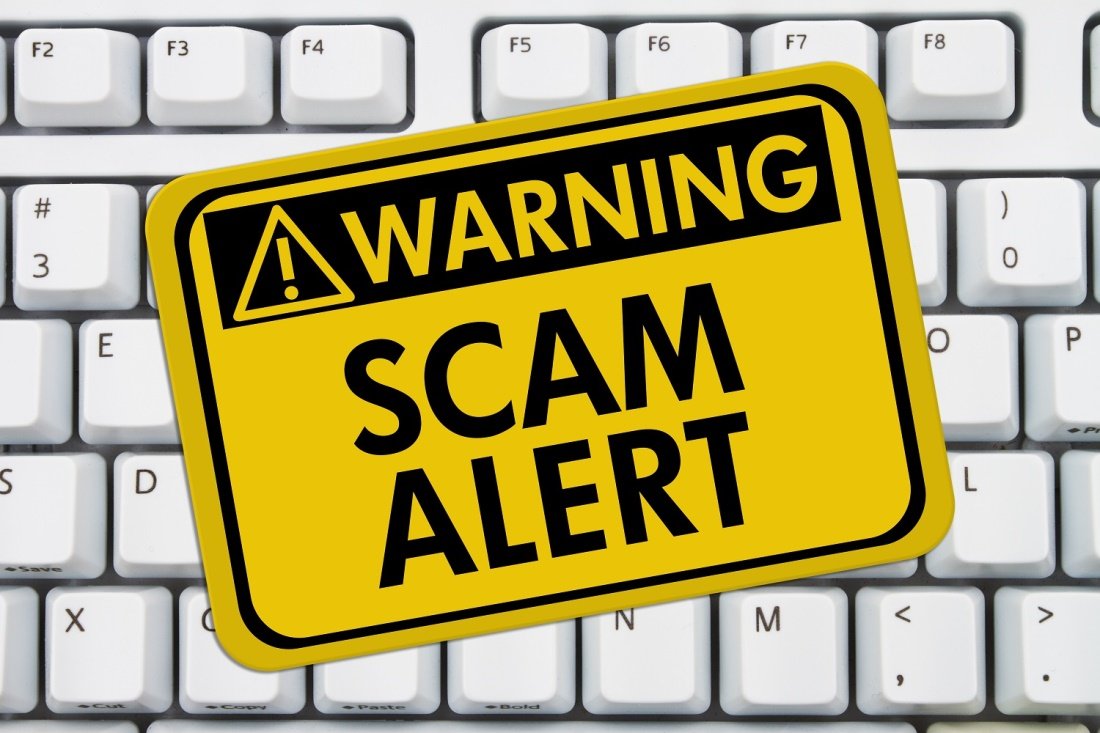 Since the beginning of that time where cryptocurrency started taking an important place in technology, being a dynamic area of it, the market has been opened to scammers who are always ready to use the unlimited possibilities and advantages that this area offers. Due to its drastic changes, also being considered as an uncontrollable market, the cryptocurrency industry is full of scammers who are able to deceive investors, unfortunately, intentionally. Consequently, it is necessary to be attentive when dealing with the blockchain space. ethereumworldnews.com is here to help you understand some of the most common cryptocurrency scams, trying to avoid the chances for you to get in trouble.

Recently, one of the most common ways for the scammers to trick investors is by Twitter. Many fake accounts have lately attack Twitter with tweets giving assurance of gaining 10x returns. It’s easy to find yourself in these frauds; here’s how it works:

Even though it may seem as an obvious strategy of scammers, and you believe you’ll never fall into this, statistically there is a major number of people who have fallen for it many times. We never recommend to send money to someone who promises a larger amount instead. If it’s too good to be true, it usually is.

Sometimes regulation can be considered as a good thing, mainly when it protects the vast majority of people. Such trading regulations prevent scammers with large bankrolls from taking the market into control and scamming regular investors to open/close positions. Being present, these regulations usually help investors from getting tricked, easily finding out the most common market manipulations.

The buy/sell walls will not affect you, unless you usually base your trades on chart analysis. You can easily identify a wall when you look at the depth chart of an order book. On this point, as the name tells itself, a wall usually consistently appears as a high wall just on one side of the order book, most times 2-5x larger than the other side. 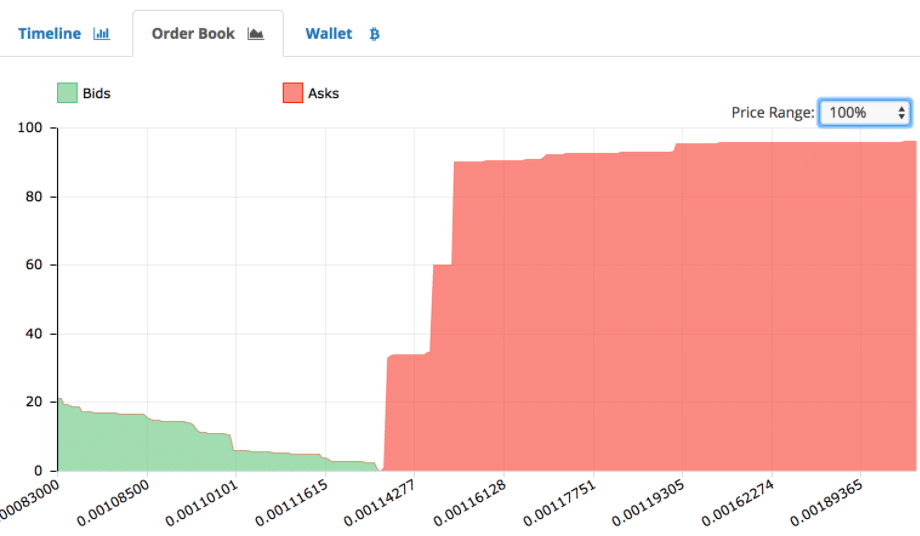 Generally most investors do panic when they see a sell wall, and the first though is to sell, mainly because it seems like that’s what everyone in the crypto market is doing. It’s completely the opposite, mostly that isn’t the case. Just as the one pictured above, sell walls are usually but up by just one, or a few individuals. They put up these walls in order to suppress the price and trick investors into selling. And in the end, they tend to buy the coins at lower prices.

If the buy orders begin to break of at the sell wall, they simply destroy the wall. The opposite holds true for artificial buy walls. It is important to recognize fake walls because most of the times they do disappear.

Pump and dump groups’ strategy is to artificially pump the value of a particular coin right before dumping it on the investors who got fooled and thought the chances of gaining more were very high. In industries where 50% gains in a month are easily attained, it’s weirdly amazing how still pump and dump (P&D) groups even exist.

A pump and dump actually cons two separate parties and mostly goes like this:

Most pump and dump groups tend to deceive other members in the group. Insiders and leaders most of the times tend to buy the coins before the pump and of course sell them before the declared dump price.

Being aware that P&D groups are deceitful and also soon to be illegal, we recommend to avoid being a part of these groups in any case. Also, in the end, not only will you have the chance to be conned but also you’ll be part of a group with unethical insiders. 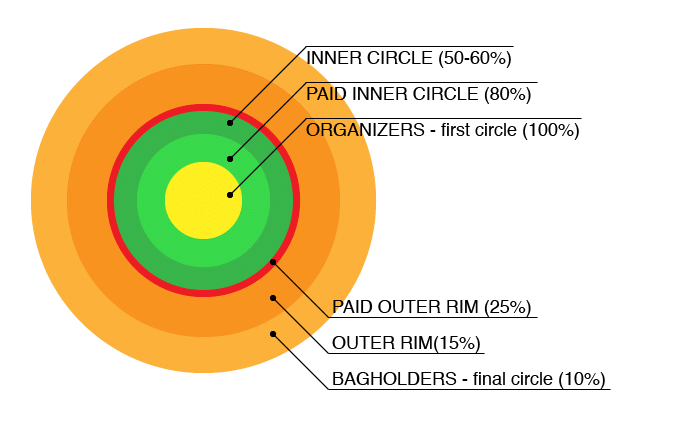 Be attentive to coins of which value increases rapidly. An easy way to identify if the coin is a part of pump and dump scheme is to analyze its trading volume. If the trading volume is significantly lower than other coins, chances to be scammed are very high.

In the below chart, U.CASH showed a brief 400% pump but only had a trading volume of a little over $25,000. This is a great example of how even a small group or one person can quickly pump and dump a low market cap coin.

Even though we might think that many well-known figures of cryptocurrency might be on our side, many of them are usually paid to promote coins in the cryptosphere. Whenever these endorsers are paid to promote various projects, they are required to reveal. Right now, there is no force towards them to do so and they rarely do.

One simple recommendation: DO YOUR OWN RESEARCH (DYOR) – best advice anyone in the crypto industry can give.

Knowing that some exchanges are vulnerable to hacks, some having questionable management practices, others having security flaws, it is very risky to keep your digital assets on these exchanges. Consequently, we recommend to keep your coins in a wallet, such as the Trezor or Ledger Nano S. Also, even when you store your coins in a wallet, you should be cautious when trading on exchanges.

One of the most common cryptocurrency scams are “Phishing attacks”. Phishers commonly purchase domains and Google ads imitating popular exchanges. The fact that the fake website looks alike with the real one- once you enter your credentials, the fake site directs you toward the correct platform, therefore, you get stolen, and your account gets empty. To not be a part of this scam, make sure you always type the exchange URL directly into the address bar. More importantly, you should have some type of 2-factor authentication enabled for all of your accounts as well. 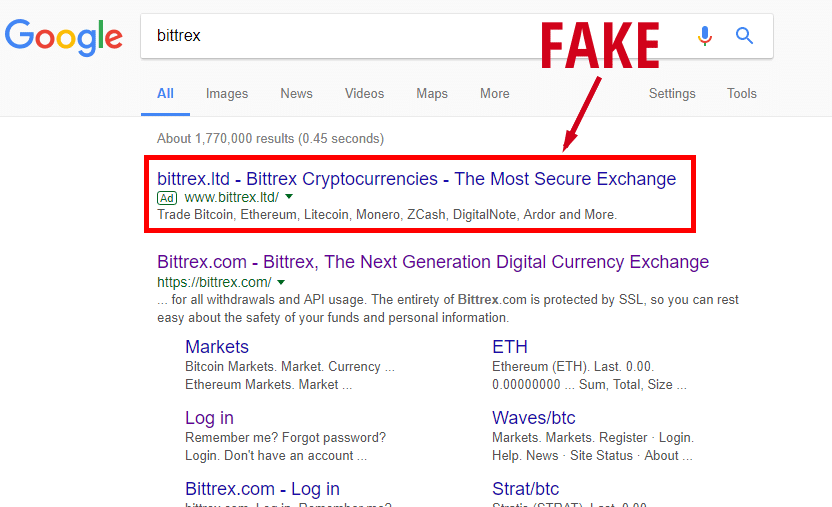 BE CAUTIOUS TO DETAILS

Everyone is in need of money, while some choose the right way to gain, others don’t. There are many cryptocurrency scams and there is no possibility to avoid all of them, but in this case, being attentive to the market changes also analyzing the above mentioned tips you will be on a safer ground.