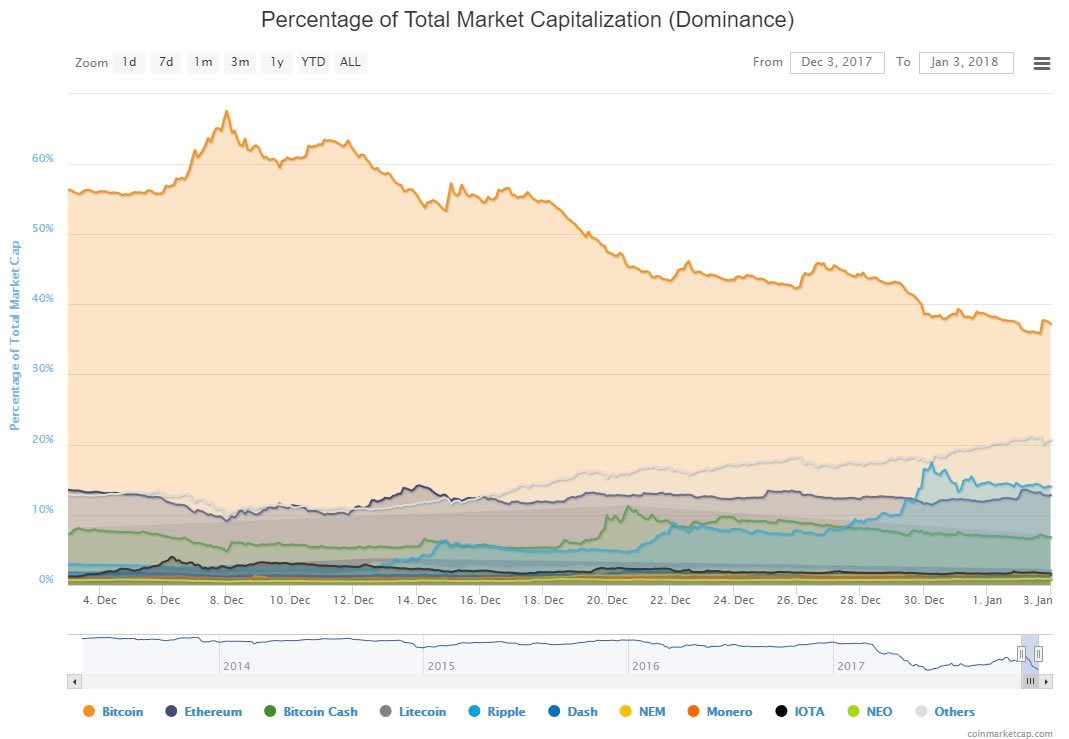 The New Year has kicked off with a bang for cryptocurrencies, most of them are trading higher again today during the Asian trading session. Bitcoin itself has partially recovered from last month’s 40% slump to trade at just over $15,000 at the time of writing.

The significant thing to notice though is that its market capacity has dropped to 36% as slower investment in the crypto king has caused the altcoins to race ahead. BTC has failed to break resistance and head back up its previous high of $20k, and it seems that crypto traders are now focusing more on the altcoins.

Ethereum has spearheaded current gains as the long awaited Casper update draws nearer. Current scalability issues will be addressed and the overall Ethereum ecosystem will receive a much needed overhaul. The platform’s alpha testnet was formally unveiled December 31 causing the current surge in ETH prices to new all-time highs of $915. At the time of writing Ethereum has almost 13% of the total crypto market cap which stands at $684 billion according to Coinmarketcap.com.

Ethereum is not the only altcoin that has been chipping away at Bitcoin’s dominance. Ripple has also made monumental gains in recent weeks, surpassing ETH as the second most popular cryptocurrency by market cap. XRP currently has 14% of the total share with just over $100 billion, it is currently trading at $2.63 and is heading towards a previous record high of $2.78. News that Ripple may be listed on Coinbase has caused a surge in investment as doing so is likely to push it well over $5 in a short space of time.

Bitcoin Cash has taken fourth place in market share with 6.8% at the time of writing. It also slumped last month in the wake of big brothers fall however has made recent gains and is heading back towards $3,000. While Litecoin has been slower to react it still has a long way to go and generally is more stable than many of the other altcoins.

Other gains in more obscure coins which have also entered the top ten have caused the decline in Bitcoin’s slice of the crypto pie. Ones to watch are Cardano, Iota, Nem, Neo, Stella, and Dash, where market capacities and volume continue to rise.