Many predictions and forecasts recently claimed for Bitcoin to reach $5000, then they were raised to $10,000 and so on. The first mark was reached today. This all started with Bitcoin being compared with Gold while throughout the media traders and investors were looking for a safer asset to replace gold and of course the successful Network Improvements hoisting the confidence throughout the community.

Bitcoin Record Price Replied with a Major Sell Off

As expected, what goes up to fast in value will return downward also sooner or later. “Large Whales” and deep pocket traders sold major-blocks in a row to gain from the moment of peak-reaching and disrupting the BTC price increase pushing it down-flow. 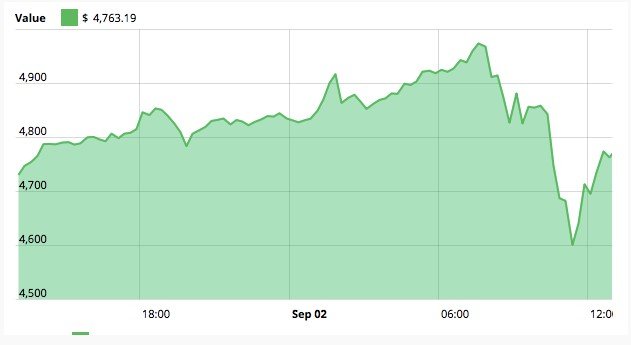 A $400 drop was followed by attempts to stabilize at around the $3700 mark. Easily expected as after reaching the major $5000 selling pressure and profit makers returned.

It is very difficult to predict the best buying dip while knowing the high price now and the minor crash could continue best is to wait for a supportive ground to be found and on the best dip (opinionated) to buy in.

The General Increase and Bull Market

While Bitcoins (BTC) bull market has initiated as early as Aug 2016 when the value against the USD was only $465, the overall digital currency market cap surged only in the last nine months from $16 billion to $170 billion.

Even with many believing that Bitcoin has been in a bubble when it took away the $3,000 resistance mark, the price soared upwards with analysis and comments from experts predicting it would hit $5,000 this year or even higher – like Max Keiser or John McAfee.

The Mainstream Factor is adding its effect with no-stop on a global range. One of the well known news platform CNBC even called to buy Bitcoin because of the could-be new price floor at around $3,600.

The successful lock-in and activation of the Segregated Witness (SegWit) while Bitcoin Cash split on its own Network was positive news that hit the BTC community followed by sparkles of debates around the BTC network for the next blockchain development SegWit2x in November.

There is a high chance SEC could be rethinking its position and opinion related to the Bitcoin ETF proposals as the CFTC (Commodity Futures Trading Commission) put out headlines when they Authorized LedgerX to form a regulated Bitcoin futures market.

On top of all this, Ropes & Gray attorney – Dalia Blass is being hired by SEC to lead the unit which regulates ETFs.

With the major-psychological barrier of $5,000 being breached media and news will be running it all around as it is more of an attracting number than $3,000 and $4,000.

According to the well-known and legendary trader Masterluc – a close-term peak of $15,000 could be expected after which a significant bull race will be to $40,000.