After descending since the start of this year, Cardano price could finally out-do the sellers and break above resistances. Is the pair ADA/USD per/moment signaling an up-coming bullish trend?

Cardano Crypto – ADA against the US Dollar

Since our last Cardano token value-related writing, in which we mentioned that after clearing the range bound of $0.74 – Cardano price could possibly make it above $1.00 for the first time. It did, however, upon spiking upwards to the new record high of $1.3100, the pair could not hold ground as sellers were waiting for a gain like that to step in. The deep dive continued for seven days now, tanking the price to its Dec development supportive areas of $0.6000. 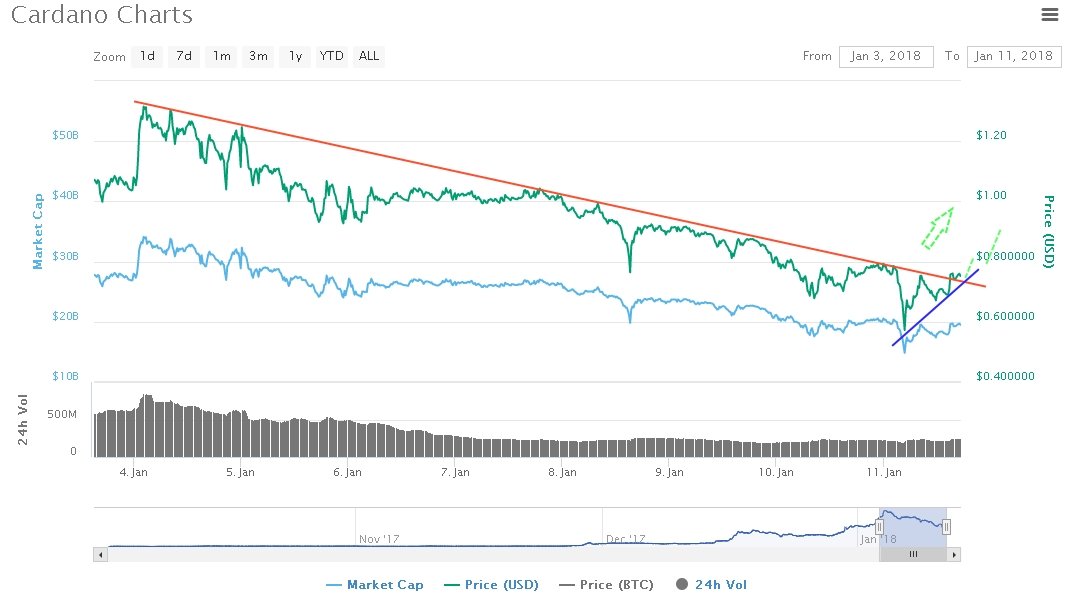 The level being around [a little more] 61.8 percent in decline of its previous gain against BTC from 0.00002539 to 0.00009180. Which is signaling now that it will act as a strong support and could be the best [lowest] to buy in before it starts advancing upwards. However, a break even below the trend line could push the pair ADA/BTC to its previous lowest again.

Against the US Dollar, the token value on the very near term, most likely will retest $0.8000 and $1.0000 with each being very struggling to overcome. However, ADA price against the US Dollar which is being experienced now could be the lowest we see for the time as the declining got slower and it is preparing for entering a bullish trend.

Starting on Monday, January 8, 2018, at 8:00 a.m. GMT, the ADA token from Cardano began to be listed on the futures exchange at BitMEX. This makes BitMEX the fifth exchange to list the ADA token since Bittrex did so in October 2017, followed by Upbit, Binance and Coinnest.

Cardano, a project of IOHK, was designed by leading experts in academics and cryptography over the last couple years and draws from various features of existing cryptocurrencies such as Bitcoin, Ripple and Ethereum, but uses a proof-of-stake/security model as opposed to proof of work.

Charles Hoskinson, CEO of IOHK, said: “As markets evolve, there is an increasing need for liquidity and more sophisticated trading strategies. I’m glad to see BitMEX list ADA and hope this continues to aid our march towards becoming the financial stack for the developing world.”