Coinbase To List Hundreds and Even “Thousands” of Tokens Soon

After completing its Series E round of financing, Coinbase has reached a value of approximately 8 billion dollars, becoming one of the most important tech startups in the ecosystem of users and traders of cryptocurrencies around the world.

According to a press release published on the company’s official blog, Coinbase managed to obtain 300 million dollars as a result of a round led by the Tiger Fund, a hedge fund sponsor that has been successfully operating in the financial markets for over 30 years:

“Today, we’re pleased to announce that Coinbase will add an additional $300 million of investment at a valuation of over $8 billion to accelerate the adoption of cryptocurrencies and digital assets. The Series E equity round is led by Tiger Global Management, with participation from Y Combinator Continuity, Wellington Management, Andreessen Horowitz, Polychain and others.

This latest round of investments has been crucial for the consolidation of Coinbase’s expansive vision, which now seeks to offer more services to users. The team now hopes to develop the necessary technology to list hundreds of tokens on its trading platform, with the prospect of having “thousands” in the future:

“Coinbase will use this financing to accelerate:
– Offering more crypto assets, quickly – we see hundreds of cryptocurrencies that could be added to our platform today, and we will lay the groundwork to support thousands in the future;”.

In addition to this clear effort to stimulate trading, the company mentioned that they would allocate resources to other critical areas to strengthen the platform and the ecosystem in general: They expect to increase the number of trading options for crypto/fiat around the world, develop more utility applications for crypto and “bringing institutions into crypto”, by adding features and crypto assets to its Custody offering.

According to Bloomberg, the company reported a profit of 380 million dollars in 2017 while the figures point to a gain of 456 million by 2018. Quite impressive results, especially considering the bearish streak of 2018. 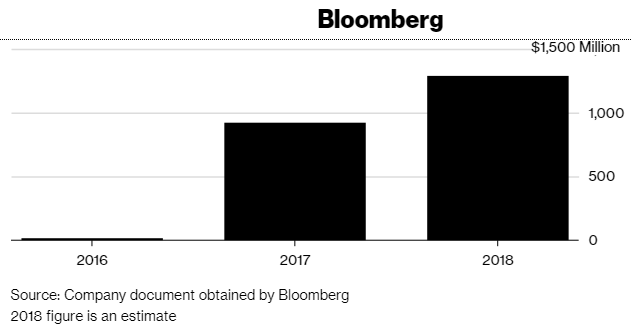 After this news spread, people on social networks widely speculated on which tokens might be the first to appear on the platform. Some of those that have sparked more interest are XRP, TRX, and EOS. So far the company has not provided any information on the subject.