Since Saturday, March 31st – the crypto-market has been in a very positive and bullish mood as prices are experiencing strong reversals with double-digit gains on a daily basis. One of the most famous that is standing above with its head is the dashing Dash [DASH].

Initially, upon clearing the important $299.00, Dash against the US Dollar balanced out bulls and bears for a couple of hours until the buyers hoisted the token value upward and broke the major $328.00 which now is acting as a stable trading ground and could be the new platform for the near term development, if the market stays confident as it is being fluxed with welcomed news. 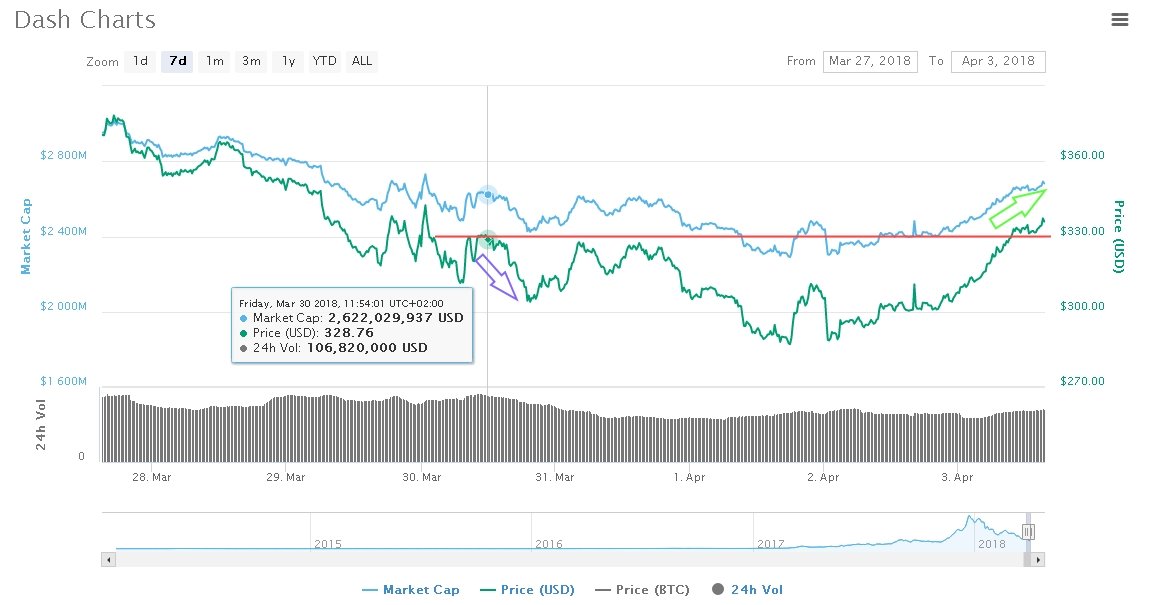 As one would expect, this uptrend has certainly helped the Dash trading volume improve over the past 24 hours which is around $85.5 mil. Top exchanges running the Dash-show are HitBTC, Huobi and Binance but no Dash/’Fiat-currency’ can be seen at the top of the list.

For a long time now, Dash has been one of the top leading and most famous cryptocurrencies in the ecosystem that concludes with many setting it under their trading radar. A very big impact on its popularity does what Dash offers – very impressive transaction speed and anonymity.

Firstly Dash was named XCoin by its planner Evan Duffield which afterwards was followed up with the name of Darkcoin. Not long after the cryptocurrency was rebranded to Dash in 2014, with the inspiration by its characteristics – being very speedy and its anonymity.

“Dash is an open-source project that delivers safe decentralised financial solutions,” he says, noting that within two days of its launch 1.9 million coins – around 10 percent of the total supply (22 million) – were mined.

“It is a form of digital cash that can be spent online and at merchants and service providers worldwide. Unlike Bitcoin, Dash can be sent and received instantly, with zero risk of double payment or theft, and it boasts tremendous stability in its value.”

Since 2017, Dash has been performing under the group of coins that rock the $1 billion market cap. Its fame was rising accordingly with firms and organizations that were accepting Dash as a payment method, counting over 300.

A platform cementing movement that will ensure further development for Dash was the announcement of its partnership with one of the leading Blockchain Web Services or BWS – BlockCypher. The pair aims to launch a grant programme for startups and other more established companies seeking blockchain-based solutions in enterprises and new markets.

One of the arguments that many tech analysts and enthusiasts find more than enough to step in and buy Dash is as it diversifies their portfolios and could be looked at as a hedging tool against Bitcoin.

Also, it delivers private transactions [PrivateSend] and instant transactions [InstantSend].it operates a self-governing and self-funding model that enables the Dash network to pay individuals and businesses to perform work that adds value to the network.

Many do feel so supportive of Dash’s future as the current CEO believes that the 12th largest coin will fly past Bitcoin:

“Dash has rapidly become the number-one digital currency for payments because of our cheap and instant transactions, anywhere in the world,” he continues.

“Dash is in many ways a better Bitcoin. It is quickly incorporating payments industry best-practices that the digital currency industry has lacked. Dash transactions lock within a couple of seconds due to our revolutionary second-tier masternode network, making Dash acceptance feasible at the point of sale and online, just like credit cards.”