Since its end-of-August stellar performance in the cryptocurrency market, Dogecoin has been left on the hands of sellers which have taken the wheel and tanked its value heavily downward. 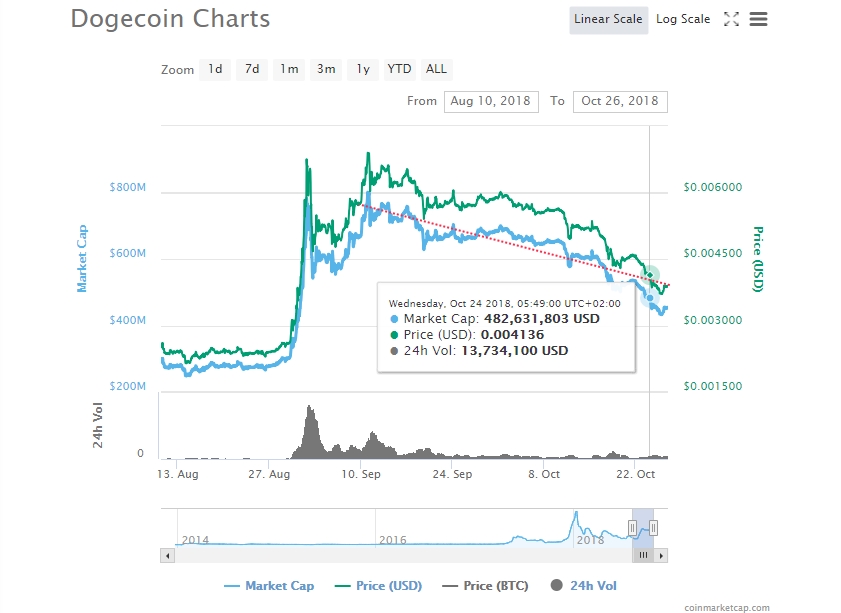 Continuing its violent-sell off since September 11 when the pair DOGE/USD hit the $0.0068 mark, the coin has broken below its declining trend opening gates for possibly even more plunging in the upcoming days. There is a high chance that the correction will continue until the value returns at\ the level of its speedy hoist at $0.0030 against the US Dollar, when more details were revealed about the popular Doge-Ethereum bridge.

Dogecoin DOGE/USD Only Double Digit Gainer: Above 20% as Doge-Ethereum is Announced

Per time of writing, the once started as a joke crypto Dogecoin is the only with a gain of 4.55% in the last 24-hours as all coins are on a slow train of balancing bears and bulls. It is leading the BTC market with 4.55% in the green.

– SALT – a popular crypto-loan provider has announced that it will be adding the 24th largest coin by market capitalization under cryptocurrencies which are accepted as collateral for fiat loans. Despite not ranking high on the list, DOGE does have high liquidity. Its daily trading volume often exceeds $11 million, which showcases its popularity. According to SALT announcement, DOGE will be one of several cryptocurrencies that can be used as collateral for GBP, JPY, and the USD. The move was announced via a Medium post.

Additionally, SALT accepts Bitcoin, Litecoin, Ethereum and Dogecoin as Collateral [which can be seen in the pic below].

– The developers of Doge Racer have shown a few new screenshots about their upcoming indie game. It is a racing game which features Dogecoin, which can bring a lot more exposure to this altcoin in its own right.