Bug bounties have been with us for some time but marketing bounties are not so long-lived and are one among many of the innovative features that have emerged in the cryptocurrency sector.

Bug bounties can see coders earn sums in the tens of thousands of dollars for finding vulnerabilities in websites and application software.

However, blockchain projects have turbo-charged the bounty economy – on the one hand because much of the code is open source and therefore free for anyone to look at and alert the development team to bugs, but also through the bounties offered for marketing project initial coin offerings (ICOs).

Marketing bounties have been growing in importance and the scope for expansion is enormous, at least that’s what the folks behind Bountybadger reckon, a new product that aims to service this burgeoning scene.

Focusing on what it describes as “service providers” looking to take up bounty offers and “employers” listing tasks to be completed to earn bounties, the website is positioning itself as a one-stop shop.

The service hopes to make it much easier for individual bounty hunters to source the best offerings and those best suited to their skills and social media footprint, initially with an emphasis on Twitter-focused bounty campaigns.

For companies and marketers planning initial coin offerings, Bountybadger provides a platform for them to get their menu of bounty enticements out into the crypto community and a tool to manage the sprawl of social media channels often involved.

“How realistic is it for a marketing executives or agency to distribute messages at scale without using paid media? It’s impossible,” says Justin Galvin co-founder of Bountybadger.

And where crypto leads, others may well follow. PR and advertising agencies are likely to start using marketing bounties to spread the word for their clients. Spending to boost a post on Twitter or Facebook is nowhere near as valuable to a brand as the authenticity of thousands of real people posting on their social media accounts.

The business rationale behind Bountybadger is that a project having thousands or brand ambassadors is always likely to be more effective than advertising, and a by-product is that it could help a token gain traction after the project is launched.

Also, negotiating with individual influencers that have large social media followings can be time consuming and cumbersome. Co-founder Jamil Mohammed says: “The bounty economy will bring the true power of social media to consumers allowing them to leverage their  social status in exchange for real money.”

Then there is the problem of fake accounts, tracking whether the tweets to earn bounties have actually happened. In addition, there’s the accounting at the end of the campaign with distribution of tokens to be worked out. Bountybadger automates all of this with the help of machine learning and natural language processing. 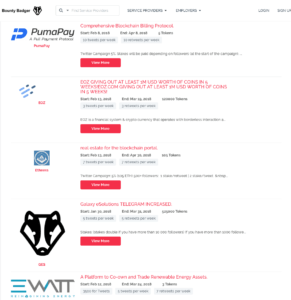 So how does Bountybadger plan to make money? Marketers paying for managed campaigns will be the main revenue stream. Galvin says that right now the site is free but “we would like to charge a subscription to fiat-yielding enterprises”, as the site’s reach expands beyond crypto.

Down the line as the product gains traction, Bountybadger wants to tokenize its service. “As the model is proven out, like Telegram we would want to have a utility token used as currency between the parties,” says Galvin.

“Our blockchain customers pay bounties in tokens but we would like to bring this innovation to the wider market and transition to full escrow and automation of payments for everyone [such as Fortune 500 companies] at a later date… I like to call it the Telegram ICO model,” he continues.

The management software for blockchain customers is in place now and the team are currently in the process of implementing the Consensys open bounty smart contract with Metamask.

Currently, the website has 150 bounty programs on offer for service providers to take advantage of. You can sign up with your Twitter account or another social network and then compete the profile by linking your other social and web properties such as bitcointalk account and BTC and ETH addresses, as well as information about work experience and education, so you look your best for companies looking for those prized influencers.

The platform is free for bounty hunters to use as there is no subscription fee or commission charged. It’s also at this stage free to companies setting up bounty programs.