Electroneum is currently one of the best performing cryptocurrencies in the top 100 coins ranking. The 42nd-ranked virtual currency is almost at a 50 percent gain in the last 24 hours. Some ETN bulls believe the coin still has more room to grow given the recent updates and fixes.

Electroneum to the Moon

Currently trading at $0.025, ETN is up by more than 47 percent in the last trading day. ETN’s spike began on Tuesday (September 18, 2018). At the time, Electroneum’s value stood at $0.005. By the following day, ETN surged to $0.015, an increase of 200 percent. This price spike catapulted Electroneum into the 52nd position on the market capitalization ranking. 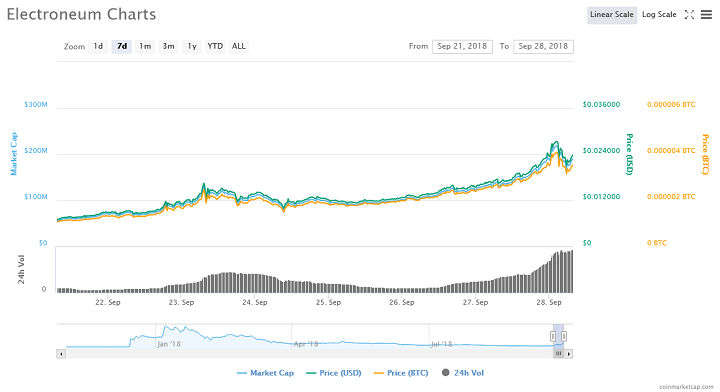 After its Tuesday/Wednesday spike, ETN continued to increase, even more, adding to its value in the process. ETN’s market capitalization currently sits at $201 million. At the zenith of the Thursday surge, Electroneum reached $0.027, its highest price since the start of May 2018.

As at press time, ETN had recovered from a minor pullback and seems destined to test $0.026 once again.

Despite the significant price rally, ETN’s trading volume hasn’t increased. Much of the spike appears due to some critical updates made to Electroneum’s operating protocols, as well as the mobile payment app beta launch.

Electroneum which is a fork of the privacy-focused coin Monero inherited a bug which allowed double spending attacks by funding an exchange multiple times with the same coins. According to reports, ETN’s development team recently patched the bug as announced in a tweet posted on Wednesday.

Exchanges notified, code is patched and available to go live again. https://t.co/oJjUEi7it0 we would advise all command line users to update. We'll be updating thousands of server instances on our AWS hosting for mobile users over next day or so, no action needed by app users.

ETN’s recent price performance is in many ways a reflection of the current general bullish trend in the larger cryptocurrency market. With the end of Q3 approaching, coin prices seem set on a significant upward trend.

Bitcoin, Ethereum, XRP, Bitcoin Cash and the rest of the top-ten market has scored steady gains in the past few days.

In recent years, the fourth quarter has brought with it significant gains for the cryptocurrency market. Last year, many coins marched on to new all-time highs on the back of positive sentiments within the industry.

Cryptocurrency enthusiasts will be hoping for more of the same in 2018 to erode the massive decline experienced throughout the year so far.