Despite the cryptocurrency market feeling and acting very shaky the last days following up the uptick experienced in the recent weeks when coins reached various respective-major marks, there is one that is going for a retest of its previous record high – EOS. 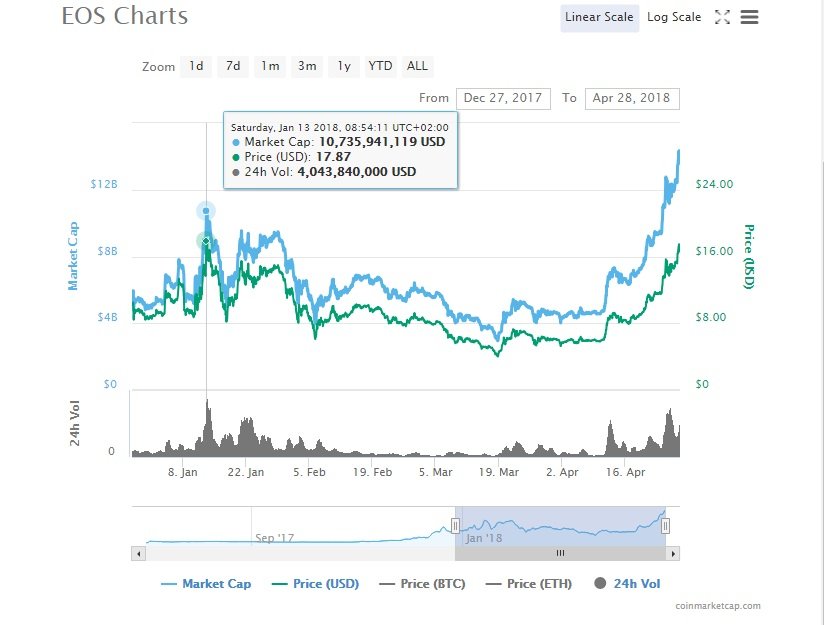 The dip of prices in general in the market could be a result of traders using the bullish trend to make some profit after the major decline that has been going on for months now since the gold-craze in December. The fifth largest coin – EOS, who overtook the position of the much promising Litecoin, is rocking the 53.78 percent gains in the last 7 days only hoisting its price against the US Dollar to $17.27. That is how EOS is now getting closer to acquiring its all-time high of 18.16$ as recorded back in mid-January at the beginning of 2018.

EOS has managed to take the place of the fifth-best crypto in the market, due to the increased trading volume and the raised market capitalization, which happened during the rebound the majority of currencies were going through after the market crash that lasted for more than 8 weeks.

This pace of growth could be explained with the fact that a lot of holders and investors are anticipating the launching of EOS main net, which is scheduled for exactly 36 days from now, as you can follow up with the live countdown on EOS official Main Net launch page.

Block.one is the software company developing a new operating system that makes use of blockchain architecture design in order to create decentralized apps called EOS.IO. The company created the EOS coin. It is a little tricky to step in with EOS as Block.one blocked purchase of tokens to people in the U.S. Those still interested will have to start by getting a wallet such as MetaMask, Exodus, or my EtherWallet. After creating a wallet then it’s on to an exchange in order to buy EOS tokens. Binance is an exchange some EOS owners recommend.