Ethereum Price Development: How to Safeguard Against North Korea

Global financial markets are under pressure from the escalating tension between the United States and North Korea. This situation is a bullish catalyst for Ethereum because it increases demand for safe haven assets and may induce retail investors in South Korea to move capital out of Korean stocks and into cryptocurrency.

Ethereum trading volume is dominated by the Korean won, and this gives it greater exposure to Korea than the other cryptocurrencies. As it stands, Ethereum may be the single best way for investors to hedge against the risk of geopolitical crisis in East Asia, especially as it relates to North Korea.

In Asia, the Japanese Nikkei and South Korean Kospi indexes have reacted negatively to the war of words between Washington and Pyongyang, and asset classes traditionally seen as safe havens (such and gold and the Swiss franc) have increased in value. Cryptocurrencies can function as safe haven assets because they do not have a central authority, nor are they linked to any government.

Cryptocurrencies also lack a correlation with the equity markets that may be affected by negative news events. As the political tension intensifies, we expect retail Korean investors to move their capital to safe haven assets like Ethereum. 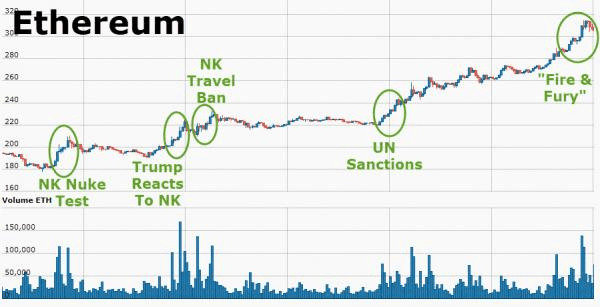 Ethereum’s market cap of under $30 billion is still small enough to be moved by retail capital from Korea alone. The total market caps of the Korean Composite Stock Price Index (Kospi) and Korean Securities Dealers Automated Quotations (Kosdaq) is around $1.55 trillion – and only a relatively small amount of capital has to leave Korean equity markets to result in tremendous gains in Ethereum.

Ethereum is the best way for investors to hedge the risk of North Korean tension because of the geographic distribution of Ethereum trading volume, and the popularity and regulatory acceptance of the digital asset in the country.

As of 8/10/2017, Ethereum represents 28% of crypto currency trading volume. Over 40% of trading volume is transacted in the Korean won and around 15% is transacted in the Chinese yuan. In contrast, the Korean won only represents less than 5% of Bitcoin trading volume, according to Coinmarketcap. Korean investors have long favored Ethereum over the other cryptocurrencies, and this makes Ethereum the best way for investors to get exposure to a possible surge in safe haven demand from retail Korean investors.

The rising tensions between the United States and North Korea is a major geopolitical risk for global financial markets, but it also creates opportunities for investors to benefit from increasing demand for safe haven assets like Ethereum. Ethereum is uniquely poised to benefit from the geopolitical situation due to its popularity with retail Korean investors and its viability as a safe haven asset.

Disclosure: I/we have no positions in any stocks mentioned, and no plans to initiate any positions within the next 72 hours. I have no business relationship with any company whose stock is mentioned in this article.