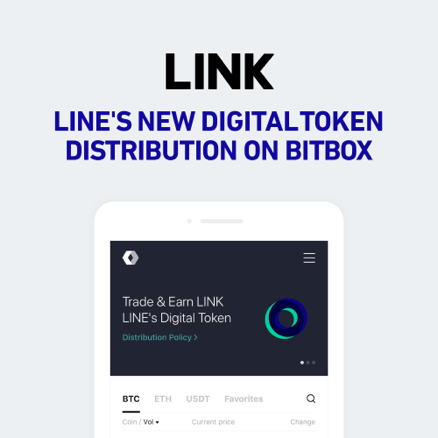 The LINK (LN) token, according to LINE Corp is available exclusively on its cryptocurrency exchange, BITBOX. Along with LN, three other major virtual currencies are also listed on BITBOX. They include Bitcoin (BTC), Ethereum (ETH), and Tether (USDT).

The company’s announcement represented an upgrade in the LINK token and also made the LN recognizable and useful in the virtual token industry. Commenting on the launch, Takeshi Idezawa, the CEO of LINE Corp, said:

We’re very pleased that users are now able to trade LINK on BITBOX, which is a major step forward in our plans for creating a token economy that rewards user participation. We think it is important to promote co-creation and mutual growth with LINK while ensuring BITBOX continues to develop as a user-friendly platform that adds value to those who use it and contribute to our services.

The messaging app also announced the inclusion of different airdrop events by its cryptocurrency exchange platform, to commemorate the LN listing. Bitbox will also airdrop TRX tokens to LINK token holders. Customers will receive an equal number of TRX for their LN.

Furthermore, for traders who deposit TRX on the platform, they will also receive an airdrop of LINK. The company provided a website containing details of airdrop events and other limited events on Bitbox’s website.

The Japanese messaging giant is not new to the digital currency scene. With a user base of about 200 million, LINE Corp has taken remarkable steps in the virtual currency space.

LINK Corp, in May, inked a partnership deal with Korean cryptocurrency ICON (ICX). The collaboration could tentatively result in millions of LINE customers using the ICON blockchain platform to access dApps.

The Japanese company further took a giant step by establishing its own cryptocurrency exchange, called Bitbox, in Singapore. Bitbox would offer over thirty different digital currencies, including major ones like Bitcoin, Litecoin, and Ethereum. The company further announced that Bitbox would only offer crypto/crypto market transaction.

As at June, LINE Corp announced that the services of the trading platform would be available to users around the world, except the United States and Japan.

In addition to its Bitbox launch in Singapore, the company added TRON (TRX) to its Bitbox exchange, through multiple trading pairs. The pairs include TRX/BTC and TRX/ETH.