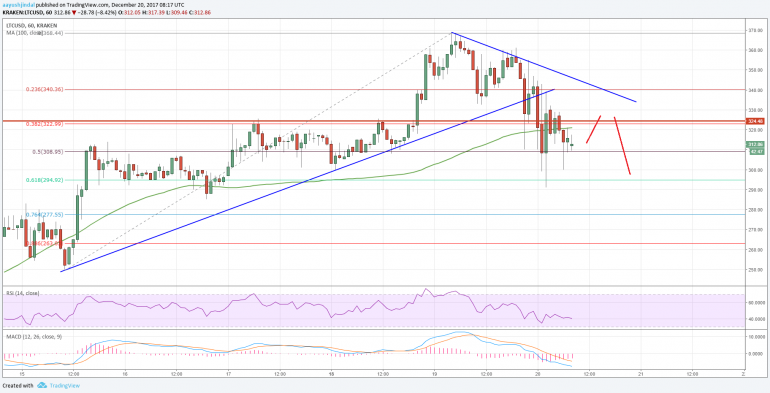 Litecoin price failed to test the $400.00 level against the US Dollar. LTC/USD is currently correcting lower towards the $280-290 support area.

Yesterday, we discussed the chances of litecoin price trading toward the $400.00 level against the US Dollar. However, the LTC/USD pair failed to move above the $375 level and formed a short-term top around the $368.44 high.

A downside move was initiated and the price traded below the 38.2% Fib retracement level of the last wave from the $250 low to $368 high. Moreover, there was a break below yesterday’s highlighted major bullish trend line with support at $330 on the hourly chart of LTC/USD.

On the upside, an initial resistance is around the $325 level, which was a support earlier and now it could act as a barrier for more gains. The mentioned $325 level is near the 100 hourly SMA as well. Moreover, there is a bearish trend line forming with current resistance at $335 on the same chart.

Therefore, it seems like there is a decent resistance zone forming near $325-335. There is a chance of LTC/USD moving back up, but it won’t be easy for buyers to break the $325 and $335 resistance zones.

On the downside, the $280-290 support area is significant. A close below the stated support area would ignite further downsides toward $250. The overall litecoin price action is corrective as of now, but the price has to stay above the $280 level.