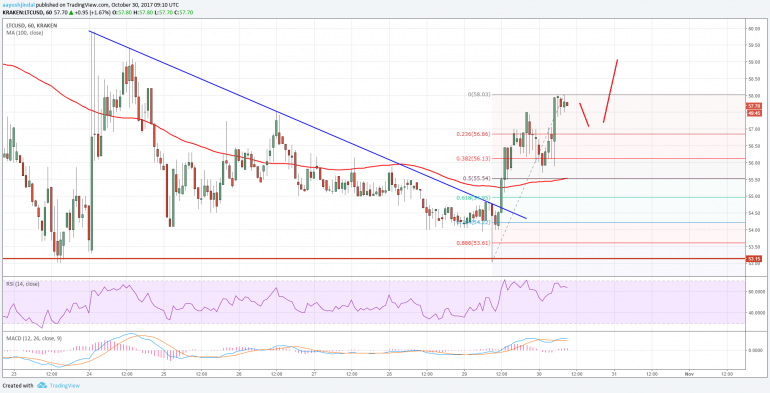 Litecoin price moved higher after forming a base near $53.00 against the US Dollar. LTC/USD is now well above $55.00 and eyeing further gains.

There were a couple of swing moves in Litecoin price towards the $53.00 level against the US Dollar. However, sellers failed to push the price below $53.00 for a test of the all-important $50.00 handle.

The pair traded as high as $58.03 recently and is currently consolidating gains. An initial support on the downside is around the 23.6% Fib retracement level of the last wave from the $53.15 low to $58.03 high.

Therefore, any dips from the current levels toward $56.00 and $55.00 can be seen as a decent buying opportunity as long as there is no close below the 100 hourly SMA.

The hourly RSI for LTC/USD is in the bullish zone and suggesting a short term correction. However, any corrections toward $56.00 should be limited considering the current market sentiment.