A very welcomed start of the week has commenced for the crypto-market industry. Green gaining percentages have taken over with buyers stepping-in after the weekend sell-off and value drops. One that is standing clearly above waters the 22nd largest coin by market capitalization called Maker [MKR].

Implemented on the second largest blockchain Ethereum (ETH) network while depended on the concept of smart contracts, Maker [native token MKR] is a case when the much criticized crypo-volatility is overcome to an extend being backed by Ether.

Despite that Tether is one of the most popular stablecoins, much doubt surrounds the coin. Lack of decentralization and transparency, emerged proof that it is backed by the dollar and the rumors that it was used to move Bitcoin’s BTC price for one’s [group] benefit could possibly make it unworthy of its fame.

– Andreessen Horowitz, one of the foremost venture capitalist firms in the world, has just announced that it is continuing to invest in the nascent crypto industry, despite the recent, violent downtrend that a majority of publicly-traded tokens underwent.

Andreessen or a16z’s crypto fund has just made a $15 million U.S. dollar investment into the Maker blockchain project via the startup’s Ethereum-based MKR token – according to Medium’s blog post.

As a first mover and innovator in stablecoins, MakerDAO represents a very compelling opportunity in the crypto space. MakerDAO’s technology, ecosystem and talent have put theory into action to deliver a decentralized stablecoin that we believe will help drive the future of the crypto economy. – General Partner at a16z crypto – Katie Haun.

– One of the leading exchange – Coinbase, made a community welcoming move displaying Maker MKR, 0x ZRX and Basic Attention Token on its just converted Toshi Wallet. Displaying these three coins on Coinbase wallet does not denote the Coinbase exchange will list any of them anytime soon.

For the time being the pair MKR/USD is in the highest gain position among many very popular coins in the top 30 by market capitalization. Reaching the level of $752.60 marks a gain of 22.77% in only 24-hours – according to CoinMarketCap. 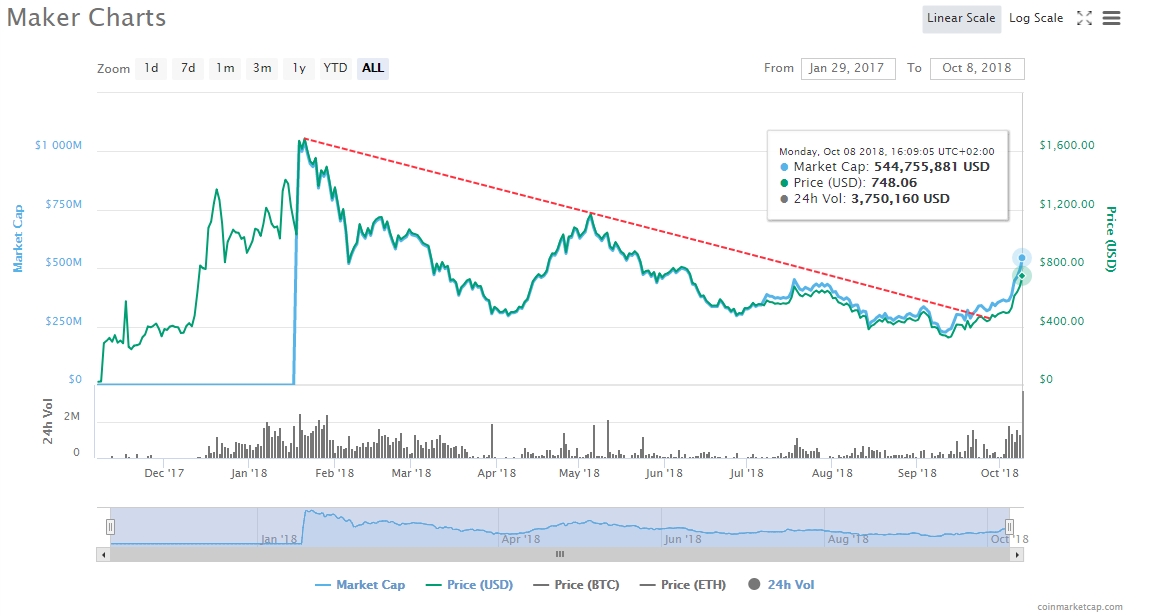 The declining trend since the beginning of this year has taken over the complete market with various signs that towards the Q4 things could be changing for the best, Maker’s MKR and its recent price performance opened gates for more gain creating a positive trading ground as it broke above the tanking bears at the end of September. Major upcoming hurdle is the $800.00 followed by the big $1000.00.