Seaming like out of the blue, Monero (XMR) is taking center stage for the last couple of week constantly while pulling more investors and traders towards it. With so many options under the radar it should not be overlooked at all.

This should not come as a surprise as it is one of the few coins that follows the original idea of cryptocurrencies to respect anonymity and safety. While the same in some way or shape is targeted by the leading coins too, there is a miss-lead taking place.

The nature to conform to present regulations set by officials can be felt from these coins which is in contrary to the above-mentioned original idea. Having main concentration set on privacy being almost untraceable and unlinkable makes Monero a choice to stand out.

Monero is headed by a group of 7 developers of which 5 have chosen to remain anonymous while two have come out openly in public. They are: David Latapie and Riccardo Spagni aka “Fluffypony”.  The project is open source and crowdfunded.

Bitcoin (BTC), Monero (XMR)–According to a report by the initial coin offering (ICO) advisory and research firm Satis Group, both Monero and Bitcoin look to be the biggest winners in terms of price gain over the next decade. Satis, which publishes outlooks for both ICOs and current cryptocurrencies has released a new forecast for the next ten years that puts XMR as the greatest price gainer.

Just Recently, the team behind Monero declared that a third-party has just completed a technical audit for the ‘bulletproofs’ protocol. An official Monero blog post elaborates on what the improvement entails, noting that bulletproofs allow for cheaper, smaller and faster transactions, and will allow for Monero to scale in a much easier fashion

The 10th largest coin by market capitalization welcomed over 10.00% gain in the last 24-hours against the US Dollar. The pair XMR/USD is changing hands at $134.56 leading BTC’s market with 10.40%. This marks the highest for almost two months now. 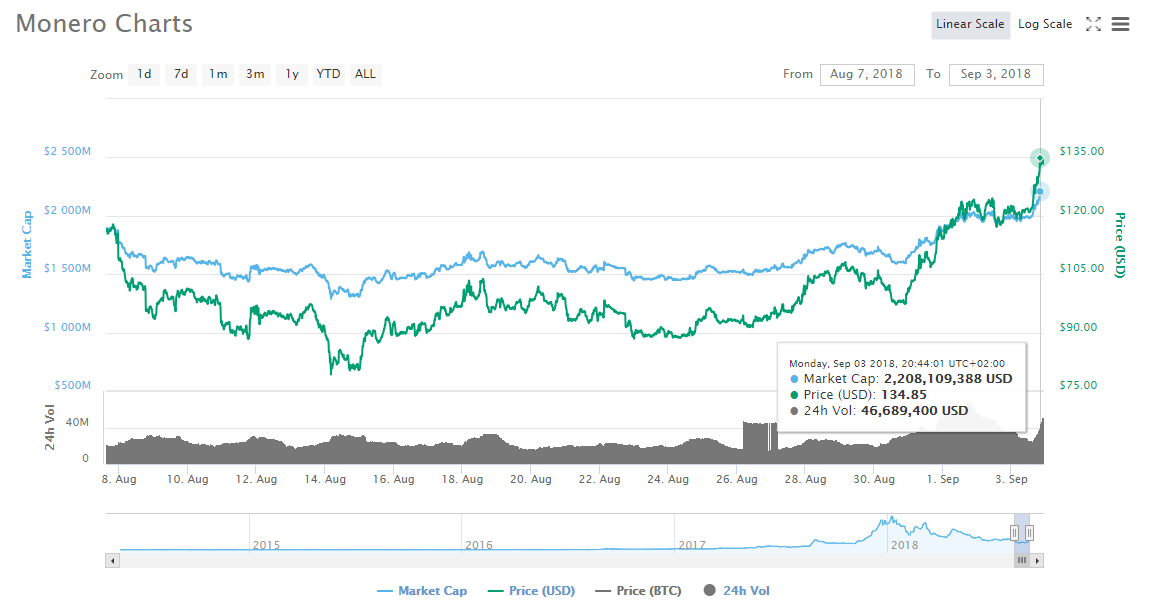