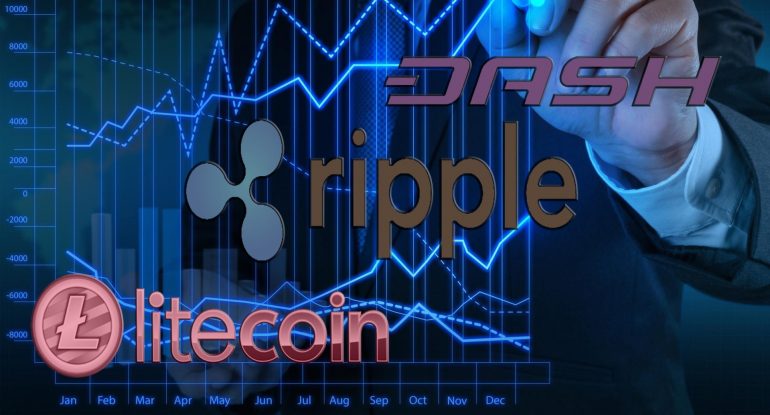 Despite the fact that still cryptocurrencies prices except Dash are in the weekly negative red zone, the stabilized trading is looking very optimistic for further gain.

The values of the digital assets paired with US Dollar are staying above important supports and on the green area for two-three days now, so in the event that there are no system changes nor in structure for the market the recovery rally could very likely continue.

On Sep 18 the global market capitalization of digital currencies has reached $140 billion.

South Korean exchanges, US and Japans are benefiting from the trader movement towards them leaving China exchanges out of “safe trade-playing” so a surge in trading volume has been experienced especially on Sep 17 and 18.

Ripple price today would be described with a hovering function over the $0.1800 mark with one time breaking to the $0.1900 mark but with no success to close above as it declined back lower. As time of the press it is trading at $0.1864 with 0.50% gain in the last 24-hours.

Even that Ripple only counts 5 percentage point trading in China, its price was heavily hit on the last major market crash as the leader Bitcoin price development will be with no exception be reflected to the following cryptocurrency prices that are following.

For the near term it is of significant importance that XRP/USD breaks the $0.1950 mark and close completely above it, as the particular level did act as support before the global market decline did take place.

For the longer term it is very difficult to predict by any point but investors should rest easy as Ripple’s price and token’s will be directed by the mainstream factor and how successful the company behind ripple is to get negotiation and deals done with states around the world. Could have easily one of the best futures to look forward.

Litecoin price on Sep 19 did break twice above the $55 mark but met selling pressure returning it again at the bottom of the $50 level. This does not mean anything bad for the near term as when it comes to the pair LTC/USD most importantly it is to continue trading above $50 for the moment as stable trading ground is being formed.

A closing in triangle pattern is being formed on the hourly chart of LTC/USD, however as long as Litecoin price stays over $50 a break-over the $60 mark could be very possible but with much struggle to begin with. The resistance did previously act as the holding support before Litecoin dropped to low $40 so hurdle awaits before the bullish trend.

Dash is an exception on the top-ten cryptocurrency list by market cap as one a weekly understanding it is the only digital currency paired with USD being on the green recovery zone with 0.19% gain.

It is trading at $325.51 with a negative 0.68 percent loss in the last 24-hours. It is creating very safe trading ground at exactly the level where it was supported before the China news came in and the major fall did start (around $326). Despite fluctuations it seems very optimistically for Dash traders as the first resistance major at $300 was cleared and successfully closed to continue higher up.