Ripple’s XRP Going for the $0.6000 While Leading the Weekend Bulls

Could the third attempt to overtake Ethereum‘s position by market capitalization turn real for the speedy XRP coin? For the past two weeks any bull run commencing throughout the general crypto market had the third largest digital asset as a catalyst to start things off. Especially XRP enthusiasts and HODL’ers had a sight to see when it showcased above 50% increase in 24-hours against the US Dollar the recent days.

Per time of writing, the pair XRP/USD is the highest gaining out of the top-ten leading coins. Reaching the $0.5843 mark brought a 9.41% gain in the last 24-hours. With a market capitalization of $23.9 Billion it is getting closer and closer to Ethereum’s $23.7 Billion. Reaching the weekly high of $0.5870 sellers are taking charge in the hourly chart and slowing things a bit down. 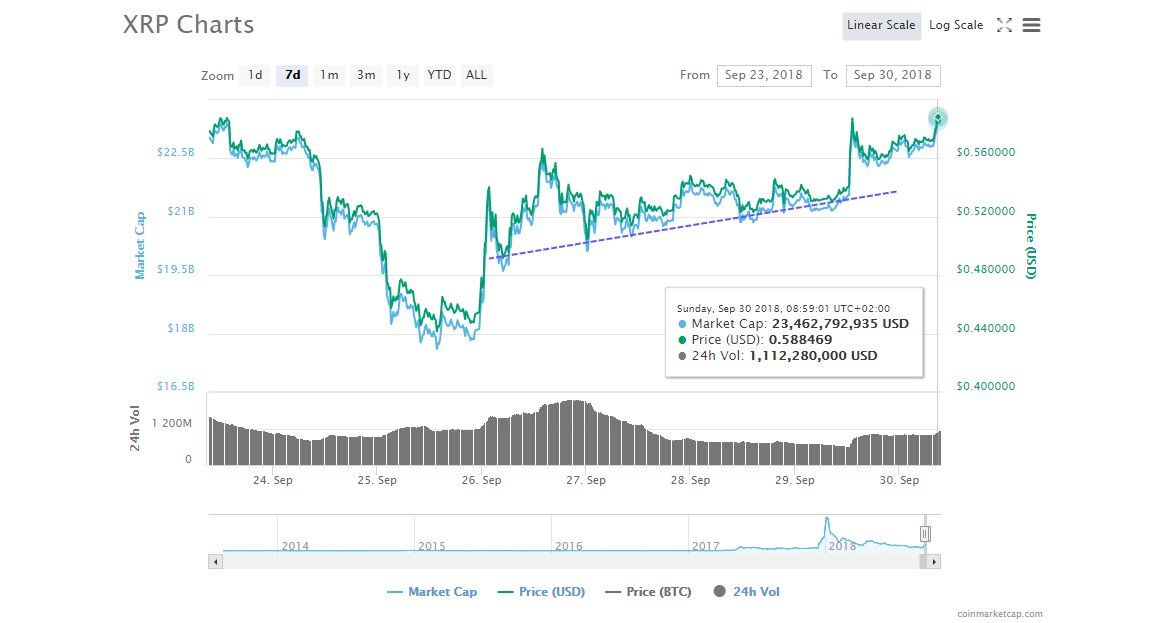 Latest from the company Ripple and the token XRP

– Turning back a little to the team and firm behind XRP. For cross-border payments to work traditionally two banks have to set a one-on-one infrastructure/connection. The situation in the Association of South Eastern Asian Nations (ASEAN) was exactly this way up until the Siam Commercial Bank (SCM) –  a member of RippleNet – became the first financial institution in the region to explore a new feature on the network known as ‘Multi-hop’.

With multi-hop, financial institutions can connect directly to SCB, which can settle and payout across the region without exchanging currencies multiple times and adding heavy fees. The result is a seamless payments experience into and out of the ASEAN region. – Ripple’s Team on its announcement.

According to the company, Siam Commercial Bank can perform efficiently between by receiving/forwarding payment trx for institutions in the region/area which are not connected directly as explained above.

– As covered more deeply and in details in a previous Ripple-related piece, based on a blog post released by Bloomberg, fintechs and businesses related to the crypto-verse have decided to team-up and start a campaign to promote a legal environment that suits the further advancement of the crypto-ecosystem.

The unit is named the “Securing America’s Internet of Value Coalition” and is formed by Ripple Labs, Coil, Hard Yaka and PolySing.