With Bitcoin Cash’s (BCH) above 50.00% decline in the last seven days, other altcoins together with the leader Bitcoin BTC [keeping in mind the market’s current sentiment] were bound to drop at least at a double digit level.

XRP against the US Dollar

According to Coinmarketcap’s data and market performance history – the second largest coin by market capitalization XRP is still above its yearly lowest of $0.2441 against the US Dollar. 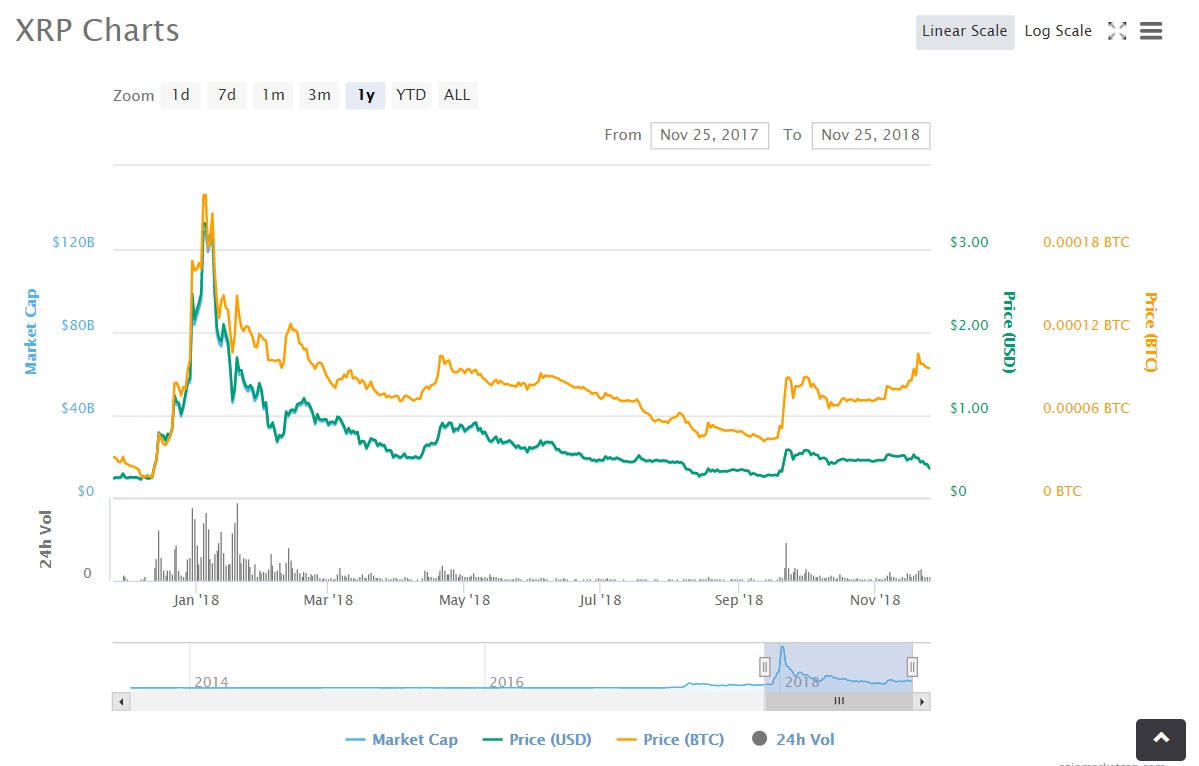 When the fork happened on November 15th and the hash war started between BCHSV and BCHABC, Bitcoin took a heavy hit too. Bitcoin is a market leader with a dominance of over 50%, and that means that its price reactions are bound to affect the rest of the market. That’s what happened. Bitcoin went down, and the rest of the market went down with it. But XRP seems to stay at a better position.

For starters – The San Francisco blockchain tech giant  – Ripple Labs has started, this year, a process of differentiation from its blockchain token XRP. This comes due the confusion by the crypto-verse between the two as in many headlines, google searches, article and so on, enthusiasts speak of the two in the same manner as if they were the same. While the miss-interpretation, confusion or miss-understanding many times was in benefit of the token or the firm itself, it is by no doubt in the positive to know that XRP and Ripple are not the same.

Bitcoin – Edward Snowden, whom Ben Wizner interviewed for McSweeney’s magazine described as clearest and most patient tech explainer, added his thoughts on blockchain and cryptocurrencies.

Imagine that instead of today’s world, where publicly important data is often held exclusively at GenericCorp LLC, which can and does play God with it at the public’s expense, it’s in a thousand places with a hundred jurisdictions. There is no takedown mechanism or other “let’s be evil” button, and creating one requires a global consensus of, generally, at least 51 percent of the network in support of changing the rule.”

“In the bull market, I don’t persuade people to buy Bitcoin, because it seems easy to make quick money but in fact, it is not. Now I start to talk people into buying Bitcoin. Those who make truckloads of money do not have a very short-term speculative driven investment mindset. Perhaps Bitcoin price will continue to drop even lower, and it may fall up to 50 percent. But it is still worth steadily acquiring coins every time it hits a new low. You possibly see a yield of 100 to 200 percent in 3 years.”