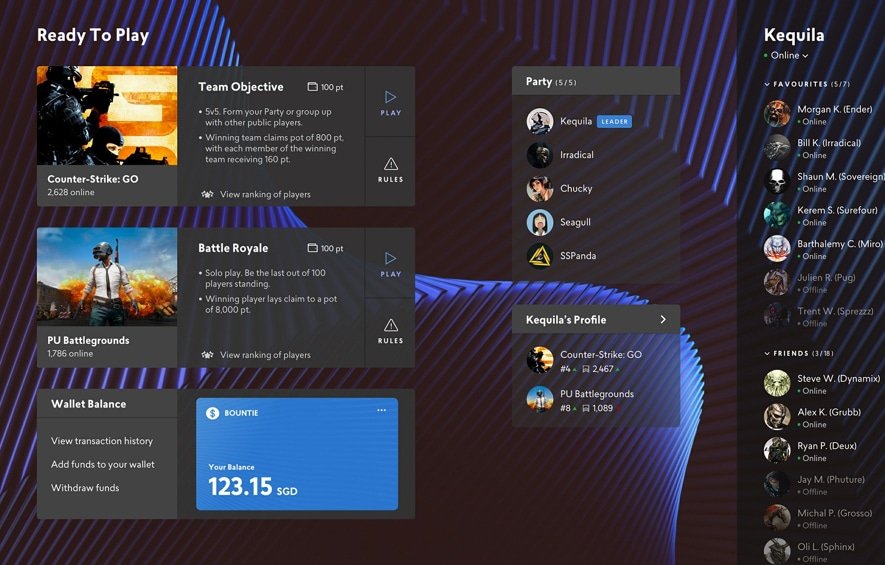 Singapore, 10 April 2018 – Bountie (https://bountie.io/), a Singaporean gaming platform that connects gamers in Asia, will be launching their Initial Coin Offering (ICO) pre-sale on 29th April 2018. Helmed by a team of passionate gamers, Bountie seeks to disrupt the current top-heavy reward scheme in the gaming industry and fill the monetization gap in the market. The platform does this by seeding incentivized competitive matches and tournaments and paying out gamers in their own cryptocurrency, Bountie Coins. Bountie has already garnered phenomenal support from the gaming community, with more than 50,000 sign-ups on the platform to date.

The platform is already in partnership with the biggest names in gaming, such as DXRacer Singapore, MSI Global. In support of the local eSports scene, Bountie is also sponsoring Team Impunity and all-girl team Girlaxy, both Singapore-based e-sports teams. Currently, the Bountie team is focused on the Asia market, targeting gaming communities in Singapore, Malaysia, Philippines, Vietnam, Thailand and Indonesia.

How It Works: Incorporating Cryptocurrency and Gaming for Players Around the World

Players can make a living while playing their favorite games by participating in weekly tournaments and completing daily achievements to win Bountie Tokens. The Tokens are backed by the Ethereum’s ERC20 Token Standard, as it enables the implementation of smart contracts, verification of transactions and elimination of fraud transactions. These Tokens can also be cashed out, saved in e-wallets or used to purchase gaming peripherals. Additionally, there is a free-to-play element on the platform where gamers can participate in tournaments without upfront costs or buy-ins to win Bountie tokens.

Revenue from eSports are expected to grow to US$1.49 billion by 2020 and global revenue from the gaming industry rose from $194 million to $463 million between 2014 and 2016, according to game-market research firm Newzoo. “In this burgeoning eSports landscape, the Bountie platform creates a contemporary ecosystem between players, gaming partners and game publishers,” said Lex Na, co-founder and CEO of Bountie. “With a dearth in established payout architectures in the current gaming scene, Bountie is capitalizing on the rise of cryptocurrency to legitimize gaming income for even casual gamers.”

Established in 2017, Bountie is a platform for gamers in Asia to make a living while playing their favorite games. Players are rewarded through participating in online tournaments and can use these rewards to purchase gaming products. By using the latest technology in blockchain, Bountie will reduce the chances of fraud while increasing transparency. This decentralized platform creates exclusive gamer profiles where rankings, stats, and earnings are readily available for public viewing with high data integrity and accuracy.

More information can be found on their website at https://bountie.io/.

For further inquiries, please email the company at [email protected].