XRP’s [third largest coin by market capitalization] first row competitor for currency remittance and cross-border transactions Stellar Lumens (XLM) is standing in the green against the US Dollar reaching a price of $0.08661. 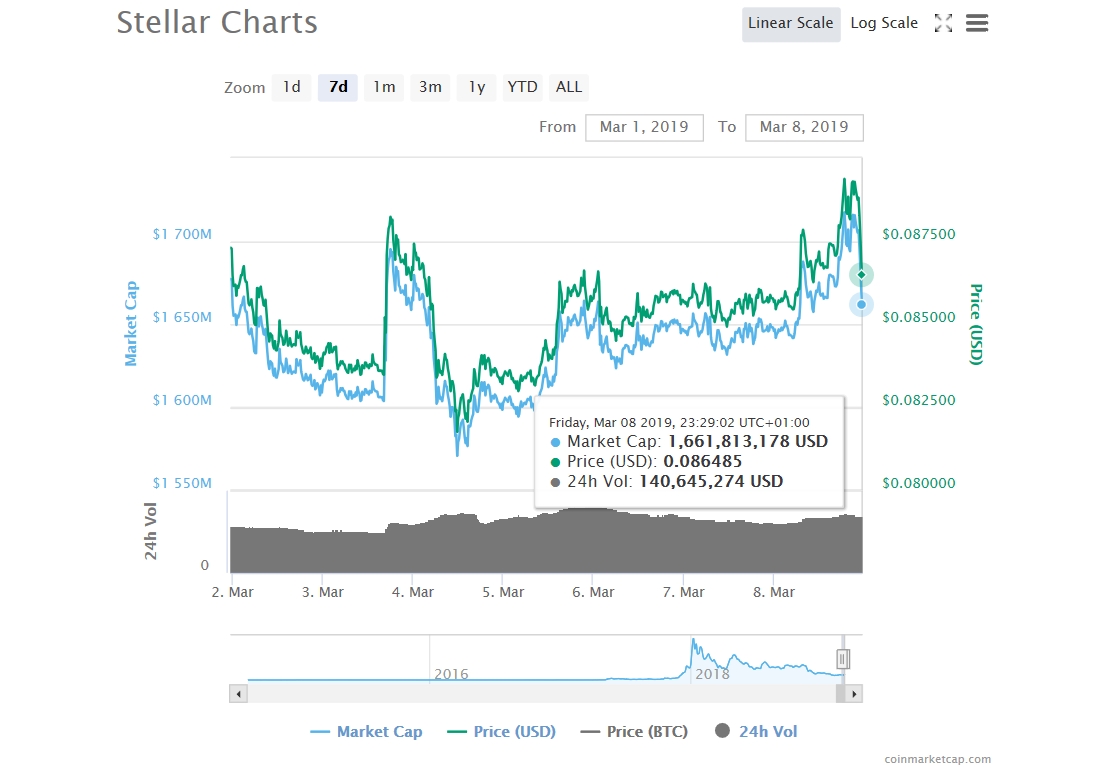 Axel Springer SE and SatoshiPay recently announced a partnership that will allow users to pay for digital content published by Axel Springer SE with cryptocurrency stored in the SatoshiPay wallet. SatoshiPay is a London startup founded in 2014 focused on developing solutions to provide frictionless micropayment solutions. Currently, the SatoshiPay platform is developed on Stellar’s blockchain.

“Blockchain payments can significantly reduce transaction costs and thus enable new monetization systems for content. SatoshiPay offers a turnkey solution that allows us to instantly use blockchain technology and offer it to our customers”.

While on the other hand CEO and founder of Satoshi Pay – Meinhard Benn spoke very highly of Axel Springer noting out the excitement working with a partner who already recognises the potential of block-tech. He also took the opportunity to thank the Stellar Development Foundation team “which supports this cooperation with a seven-figure partnership grant.

Coinsquare, has recently acquired the StellarX decentralized exchange. The team at StellarX made the announcement via medium and stated that they will still continue with the roadmap outlined back in September of last year. Coinsquare also acquired BlockEQ late last year for $12 Million. StellarX will be led by BlockEQ’s co-founder, Megha Bambra,  and will continue to grow and enhance the Stellar ecosystem. – BlockEQ – private stellar wallet.

BAT – Via teaming-up with Tap Network which is a blockchain-concentrated advertising platform, the team behind the famous BAT cryptocoin made it possible for its owners to redeem on choice their tokens for rewards on over 250k brands with giants like Apple, Uber and Starbucks.

The Basic Attention Token, which transacts the token transfers via the Ethereum blockchain, made its debut in the cryptocurrency industry with the target of resolving present marketing and advertising issues with which individuals have to deal with in the particular industry. The above mentioned partnership was first announced during Mobile World Congress on February 2019 by Brendan Eich – CEO of Brave Software.

Waves – The teams at Wirex and Waves (WAVES) have worked together to integrate the digital asset on the popular crypto-debit card platform. Wirext also allows its users to buy, store and manage a variety of cryptocurrencies. WAVES joins the major digital assets of Bitcoin (BTC), Litecoin (LTC), XRP and Ethereum (ETH) on the Wirex platform.

[Wirex] provides extra liquidity for cryptocurrencies and gives investors the ability to convert and spend their crypto instantly with our Wirex Visa card. Investors who buy WAVES through our platform will know they are with a safe, agile, cost-effective service. In addition, our existing users will have another strong and popular token to add to their portfolios. – CEO of Wirex – Pavel Matveev