Top 5 Altcoins to be on the Lookout: Choose Your Winner!

Despite the fact that the crypto-ecosystem was given birth with the debut of Bitcoin, which is still the leader by market capitalization, there is much yet to be seen by the technology [crypto in general] that is developing rocket-like in a global scale and if other alternative coins could dethrone BTC.

The rapid rise of cryptocurrencies over the past few years has not been documented particularly well by mainstream media, but the progress that the technology is making can’t be denied.  Event that Bitcoin has the largest market capitalization, the complete crypto-market counts more than $560 billion and it is growing speedy.

Ripple (XRP) is designed to be a global payment system that offers rapid transfer of funds anywhere in the world, on a ‘trust less’ low maintenance system. The ideal target of Ripple and its technology is to allow money movement in just-seconds with no side disturbance which sometimes could be complicated while using today’s banking systems with the notable fees.

With the blockchain technology at hand, the data and records of the transfers can be written down and safely put away many times over which idea makes the information nearly to impossible to be changed.

The token XRP is widening its reach with UAE based exchanges starting to add it as a possibility to change hands.

A new generation cryptocurrencies. Raiblocks is showcasing great competition lately to IOTA for the ‘new kind’ which are known for being – fast, feeless and minerless. It could catch you off-guard reading minerless but the way that RaiBlocks functions is that it is based on a crypto-architecture known as “block lattice” – it is a database of blockchains in which each user has their own blockchain that only they can add onto.

First thing first, the coin launched two-three years ago in 2015 being part of a product that does have actual users right now. In the community and ecosystem we enthusiast about maybe everyday that is rare to meet.

Already holding partnerships with the likes of the Chinese Government, Price Waterhouse Cooper and DNV GL – Vechain seeks to offer a wide array of block chain services to Fortune 500 companies, everything from disaster recovery for data, through to counterfeit prevention in designer clothes and fine wines.

VeChain is all about the authenticity with supply chains – with the block-tech, the authenticity of the already bought goods can be verified and checked. It’s a system that aims to ensure product quality, but in a decentralized, global network that cuts across industries.

Formerly known as Antshares or the Chinese Ethereum. The network delivers a platform for apps to be built on within which blockchain can be used to solve data issues. Neo also uses Smart Contracts as a part of it’s service, as like VeChain, Neo tokens generate GAS which is used to far for services on the Neo network.

Just today, per time of writing – to cement its position even stronger, NEO has gained over 9 percent in the last 24-hours, being the only one in the green zone out of the top-ten digital currencies by market capitalization. 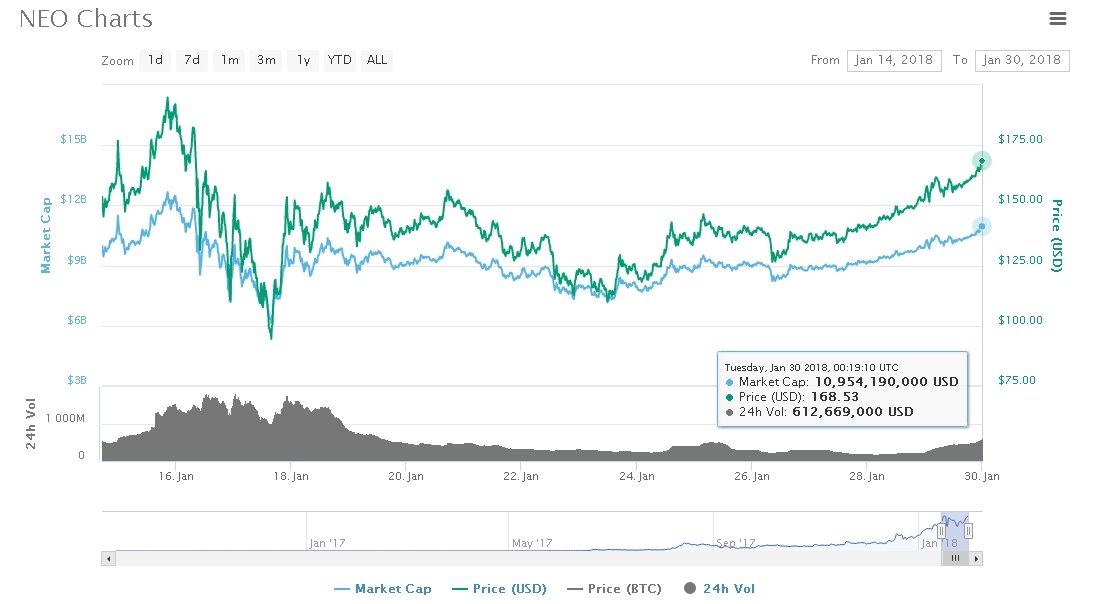 It has just reached the 6th position passing by Litecoin and Stellar with almost $11 billion. Just recently, NEO has been added on Omicrex exchanging platform which makes NEO/BTC  available to paired since Jan 15.

Another exchange has spoken out when it comes to the Ethereum Network congestion taking place by recommending to choose NEO when it comes to transferring or moving your part of tokens or values across various platforms.

We've detected the network congestion of ETH official website, it is more likely the occurrence of delay withdrawal of ETH from part of the users. Hence we'd recommend users to proceed withdrawal by transferring ETH to NEO. pic.twitter.com/Fij9AuPJB0

The level at which the vision on what IOTA is built on is so large it would be difficult to come around in a few words. The target is to create those circumstances in which all services are tradeable with another.  Primarily aimed at B2B but with the potential to expand rapidly into a B2C, and even C2C market, IOTA aims to make transactions between businesses seamless.

For example – A company is in need of more storage, while another company has enough even to sell – this can be processed through with the use of IOTA network. It’s a system that goes back to the time of bartering in Markets, where services are paired, rather than going through the middle-man of a currency first.