Tron price experiencing the highest gain at the top of the list. However, first supports were cleared as sellers did take no pause.

The whole market has been on a submarine dive with the regulation pressure scaring off investors and clearing away the positive energy that was surrounding the community. With South Korea impending ban of virtual currencies – it would take down an area which was very bullish late 2017 because of the same country.

On the other hand Wall Street’s discouraging view towards digital currencies has resulted with many traditional investors to step back from the market before the regulation-less market felt the squeeze. 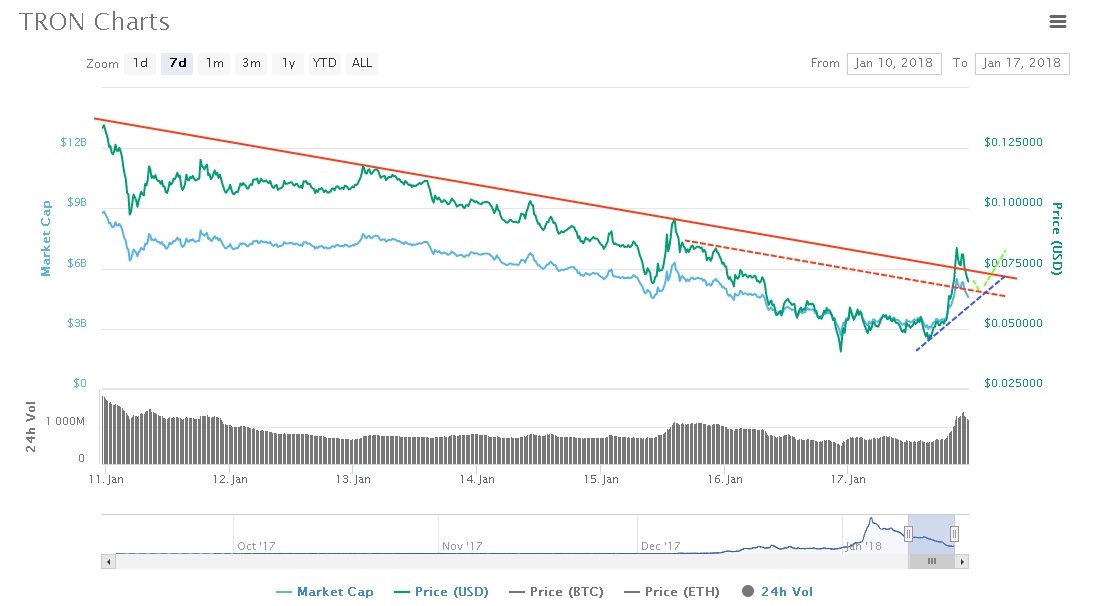 Now, on the hourly chart of the pair TRX/USD, proportionally with other cryptocurrencies – an increasing pattern is being formed which did almost on all leading coins clear the descending pattern resistance that was followed by another dip very soon [withing minutes].

For Tron, a second supportive trend line is formed with waiting base at $0.065, which could be a used as a referring point. In the case that Tron price stabilizes buyers and sellers above the trend against the US Dollar – it could signal a return sooner than thought and hop on the surging train, however, if the above mentioned area is cleared the value will enter its previous declining movements.

Keeping in mind, that the whole market is moving as one taking a step back and looking out for all what is happening around the ecosystem regarding news, announcements and to other altcoins would be a first thing to do before choosing where to buy or sell.

Trade safe and do not Overtrade – Support Crypto!