Out of all the leading coins, despite the recent value recovery that was going on in general, only TRON (TRX) was able to continue the uptrend into the new week with a double digit gain of 12.21% in the last 24-hours. The rocketing move catapulted TRON back to the top-ten leading coins, on the 9th position, with $6.3 bln market capitalization leaving NEO in dust with almost $1 bln ahead. 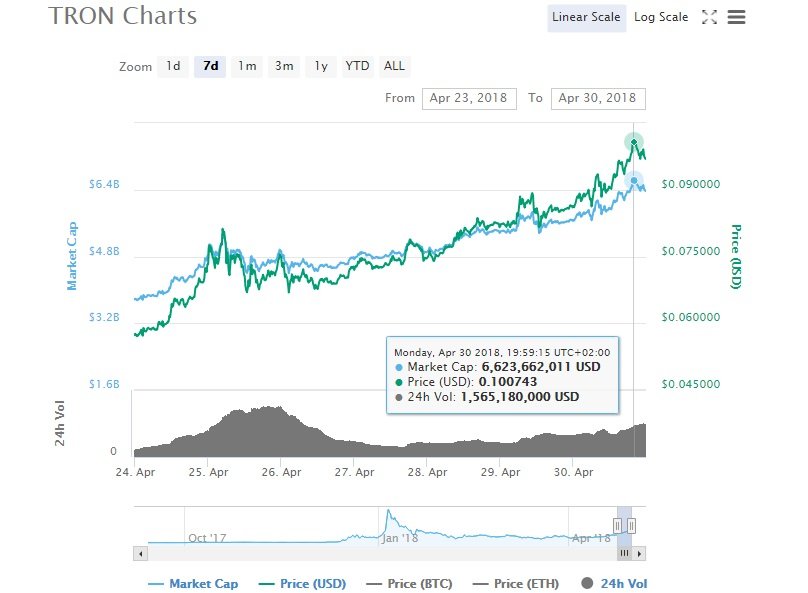 The markets that are leading in trading volumes are mostly originating from Asia with a slight premium price. Upbit changing pairs of TRX/KRW at $0.0981 with 25.75% of total trading volume in the last day.

It is obviously very difficult to immediately pin-point down the reason and what is impacting such a dramatic token-price performance in comparison with other cryptocurrencies in the market as there are no updates that would argument the upward tick. Various investors and analysts point their finger to the mainnet launch as a trigger for the hype and value rally, however there could be more.

Keeping in mind that Justin Sun – Founder of TRON, is an alumnus of the large tech corporation Alibaba, there are rumors reaching out the spider web that the digital currency will utilize this connection and relationship to sign down a strategic partnership with the conglomerate.

These rumors resurfaced on Monday in an article published by a cryptocurrency news blog, which speculated that a partnership would be bullish for Tron but also included no data indicating that such a development was in the works.

But Jack Ma – Founder of Alibaba, as reported in the past, has no intention at least for the near future to get in touch with any crypto despite being very bullish about blockchain as a technology development.