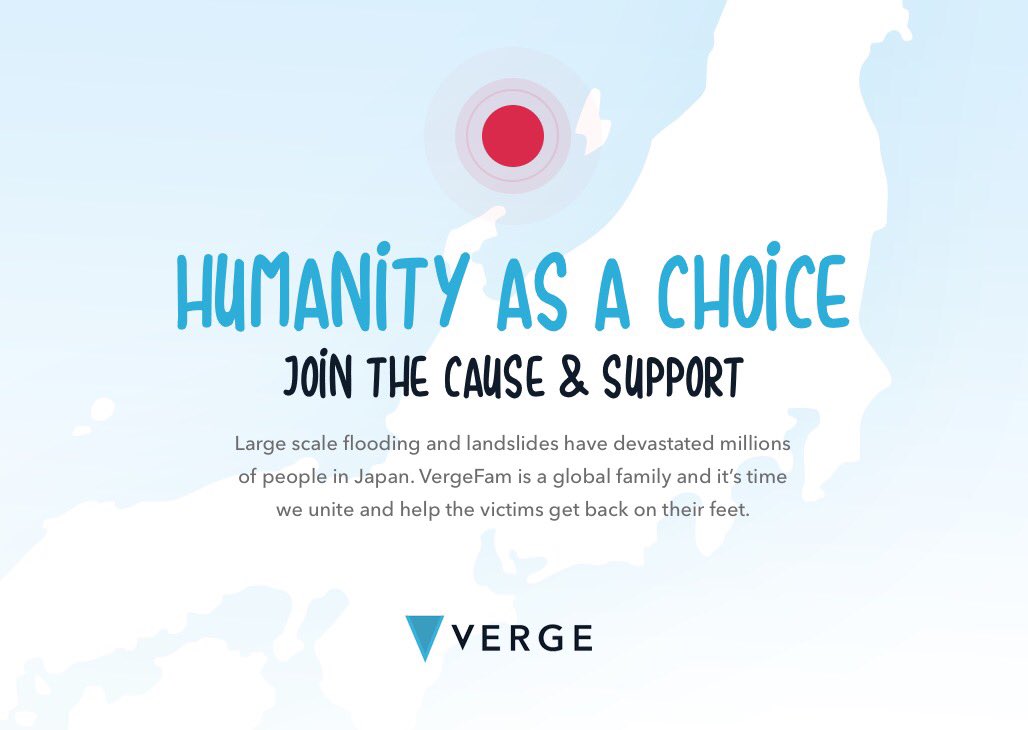 Verge (XVG) –It should not marvel you why American actor Benjamin Bratt levels the reason behind his personal strength on his family. When you look around today, it appears, many a number of successful people have their family to thank in everything they do.

“My sense of personal strength has always come from my family.” –Benjamin Bratt

The same could be said of Vergecurrency that has solely been dependent on its family –the VergeFam. Verge is one major cryptocurrency that receives much support from its family every time the need arises. Recently, Verge community met in Amsterdam to share the joy of brotherhood.

Verge at the moment is going on a crowdfunding to help victims of torrential rains which resulted in landslides and flooding in West Japan where nothing less than 112 people have been reportedly dead as at the time of filing this information.

Unknown numbers of people are still missing while tens of thousands of people have been displaced, with thousands of homes destroyed due to the massive environmental disaster. Now, around 5.9 million people in 19 prefectures have been warned to relocate. At the press time, around 23,000 people are still staying in evacuation centers, according to the Fire and Disaster Management Agency.

As parts of its humanitarian effort, Verge is seeking donations from cryptocurrency lovers, especially those who cherish Verge, to kindly join in aiding victims of West Japan disaster.

“A call to unite all communities as a global #crypto family. Let’s come forward to support @japan. Verge Currency will donate all funds to @binance’s effort to support this disaster.”

Observers who believe in the strength of the Verge community are of the opinion that the family will donate beyond expectation, purposely for humanity.

Earlier, Binance has donated $1,000,000 to the victim of the flood in Japan, calling crypto community to follow the step.

“To help out the victims in West Japan that were affected by the heavy rains on 7/7/2018, Binance is donating $1,000,000 USD and calling for our crypto friends and partners to join us in the relief initiative.”

Interestingly, Binance may use the donation as a yardstick for listing new coins on its platform.

“Exact logistics will be figured out shortly. Reply to this thread or let me know if you (ur project) want to donate. Bonus points for future listing requests. And we may count your donations towards the listing fees. Listed projects, you know what to do!”

Meanwhile, in the donation run, SpydrZero, the creator of Skorch Token, came first.

“@SpydrZeroYT actually beat us to the transfer, and became the first donator. crypto speed! Thanks.”