Since Bitcoin‘s inception into the financial and technological world, with the concept of bringing forth improvements various coins have emerged also afterwards. Despite being the pioneer and current leader by market capitalization, Bitcoin [BTC] is not the best offer out there when it comes to tech-capabilities and potential. But, credits should be given to the digital gold as it is where everything started.

Some of the newer cryptocurrencies started as an idea to make Bitcoin better or try and expand its reach while concentrating on one feature more than the others that could be: privacy, speed or security. One of the leading coins when it comes to privacy is Zcash.

Its story starts with Matthew D. Green – Professor in John Hopkins University in 2013 introducing the protocol named Zerocoin. At that point it was representing an extension protocol for Bitcoin’s network to gear up the blockchain privacy game. With it users were able to destroy the coins while returning an equal value of them later. Not much later on, Mr. Green made it public that a new form of Zerocoin is in the works called Zerocash.

This marked a major step taken towards today’s Zcash standing point as Zerocash was a complete new and unique protocol not designed for Bitcoin improving. Bringing the feature of even hiding the amount of returned coins after destroying them, its privacy was at an even higher bar than the original protocol. Additionally, decreased by 98% the size of transactions.

All the aforementioned was made real via the zk-SNARK or Zero-Knowledge Succinct Non-Interactive Argument of Knowledge which has been complemented and also as a very possible solution introduced for Ethereum’s scaling issue by its master mind Vitalik Buterin.

We can actually scale asset transfer transactions on ethereum by a huge amount, without using layer 2’s that introduce liveness assumptions (eg. channels, plasma), by using ZK-SNARKs to mass-validate transactions. Here is how we do it.

The system is managed by a contract, whose state consists solely of two bytes32 values representing Merkle roots: address book (A) and balances+nonces (B). A starts off as a Merkle root of 224 zero entries, and B as a Merkle tree of 2^24 (0, 0) tuples.

Zooko Wilcox-O’Hearn in the lead of Least Authority in 2014 with Matthew D. Green formed Zcash Company or Zerocoin Electric Coin Company. The process of team growth continued and finally concluded with the decision and completion of Zcash forked the Bitcoin base.

Coinbase – On July 13, Coinbase announced that it was exploring the possibility of listing Cardano, Basic Attention Token, Stellar Lumens, Zcash, and 0x on its platforms. This was months ago and although the post did not explicitly guarantee that the coins would be added to the exchange, many anticipated it would happen. This might just come to be following the recent announcement made by the exchange.

The move was followed up with another post via Coinbase’s twitter handle announced that the team is planning to speed up things with the listings.

Today we’re announcing a new listing process that will allow us to rapidly add most digital assets that meets our standards and are compliant with local law, while providing our customers with the tools to discover, evaluate, trade, and use digital assets: https://t.co/6AteNMOnYr

Bittrex – One of the top 50 cryptocurrency exchanges by trade volume around the world, announced end of Aug its decision to enable crypto/fiat trading pairs for Cardano and Zcash. Its official account tweeted this and later confirmed via an email sent to its subscribers.

Per time of writing the pair is changing hands at $134.40 with 1.31% in the green for the last 24-hours. With a market capitalization of $656.9 million it is ranked 21 among the leading coins. Since the last violent digital asset dump that took place beginning of September, ZEC had one of the most stable price recoveries in the market. With the target of making it above the major monthly $135.00 mark, it is welcoming a stable gain. If the well-set ground holds it is a matter of time before ZEC against the US Dollar returns above its end-of-August levels. 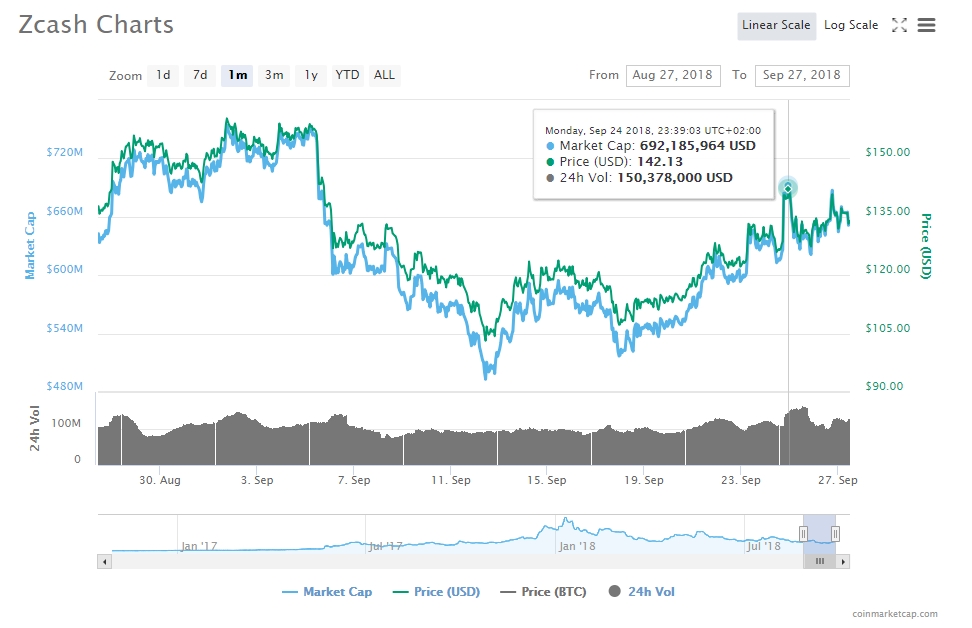