$1.6 Million in Bets Handled on the Augur (REP) Network During the US Mid Term Elections

The decentralized prediction platform of Augur (REP) that is built on the Ethereum network, has achieved an impressive feat of handling approximately $1.65 Million in bets during the US Mid Term elections that were held on the 6th of November this year. During the day of the mid-term elections, the value of bets had initially reached $900,000 only to surpass the $1 Million mark as the day came to a close.

Further researching the bets made using Augur on the tracking website of Predictions.Global, we find one particular bet that asks which party will control the house after the 2018 US Midterm elections. The volume of this bet currently stands at $1.625 Million. The outcomes of this one bet can be found in the screenshot below. 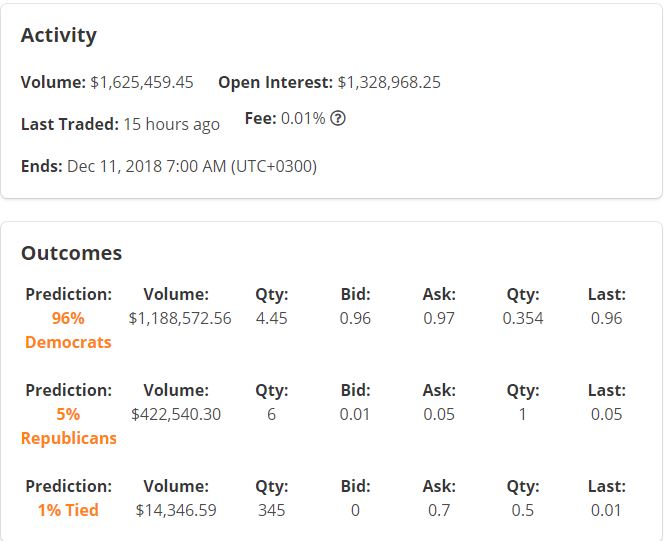 The above bet is one of many placed on the Decentralized Augur platform during the US Mid.term elections. Another bet with regards to the Senate currently has a volume of $25,371 in bets.

The Augur prediction platform went live this July after 2 years of extensive development and testing. The Beta version had been available for over a year before the final version was launched. Augur had managed to raise $5 Million through an ICO back in 2015. The final launch of the betting platform also included a migration of the REP token from the Beta platform.

The platform allows users to create and make bets on anything from elections, sports, even weather. Augur is unique in the sense that no single entity controls any bet.

The current value of the Augur (REP) token on the Ethereum platform is $14.62. The token is down 1.26% in the last 24 hours. With a circulating supply of 11 Million, REP is available in prominent cryptocurrency exchanges such as Bithumb, Binance, Bittrex, Ethfinex, Kraken, Poloniex, just to name a few.