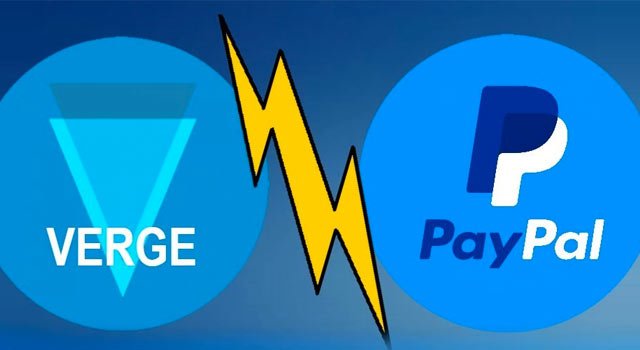 While there is no official statement indicating Verge is making behind the scenes move to capture Paypal and Venmo, a news reported that claimed it has in-house informants, indicated that “Verge is aggressively pursuing PayPal via their Venmo platform”.

The news source indicated that Venmo and Paypal is thinking of adding multiple cryptocurrencies to their platform with Verge at the forefront of being added.

“There is nothing in this industry like momentum, and we have it right now. It is powerful and is pumping adrenaline into the heart of this place right now,” the news publication claimed adding that, “Yes, we are pursuing any and all partnerships, but the payments partnerships are at the top of our list.”

“And not just TPay either. Venmo is on the ‘verge’ (lol) of doing some next level stuff and we are hitting them hard to be included. I feel good about the possibilities there, I will say that.”

The publication also reported that it conversed with a former executive at PayPal who now consults for them regarding cryptocurrencies, “Venmo will announce something by the end of 2018 and the idea is to attempt to one-up Square by bringing 5-10 cryptos onto the platform right at the outset. I can confirm that Verge is seriously in the mix.”

Verge And Spotify: Any Hope?

Verge is trying hard to coast the cryptocurrency world by getting more partners. The team is doing online and offline campaigns in that wise.

A tweet by Cees Van Dam, a Verge’s core member responsible for recruitment and social media, called on Verge community to vote and campaign so that it can earn Spotify’s adoption.

In the link, Dan, calls on Spotify to see Verge as the right choice, demanding that the firm request “a formal evaluation” of the coin to understand what’s involved.

“We are extremely excited to announce that we have recently partnered with Mindgeek, a privately held company that owns and operates over 85% of all the adult entertainment industries websites and applications,” the petition reads.