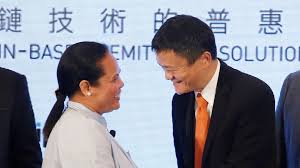 Alibaba’s affiliate in Hong Kong, Ant Financial, launched a blockchain powered remittance service on its AliPayHK mobile platform on Monday, June 25th. At the event, Mary Grace, a Filipino worker in Hong Kong, used the service to send money back home in a matter of three seconds. The usual process of sending money from Hong Kong to the Philippines could take up to 10 days, but this time frame has been shortened by the new platform that is as a result of AliPayHK partnering with GCash.

The launch comes at an opportune time for the city of Hong Kong has long had a reputation for lagging behind in terms of adopting fintech solutions when compared to mainland China and Singapore. AliPayHK’s partner in this new service, GCash, is a Philippines based micro-payment service operated by Globe Telecom in the same country.

At the event was Alibaba’s founder Jack Ma, who used the event to popularize his idea that blockchain technology should not be used to enrich a few, but rather to help provide financial services to the over 1.7 Billion people globally that are without access to bank accounts.

Jack Ma was quoted as saying:

Blockchain should not be a tech to get rich over night…There are still 1.7 billion people in the world who have no bank accounts, but most of them have mobile phones. The impact of blockchain on the future of humans may be far beyond our imagination.

Jennifer Tan, the CEO of AlipayHK would also comment the following during the event:

We are very excited to introduce this new remittance solution to our users in Hong Kong, and in particular to the Filipino community in the city. What used to be a long process of physically going to a remittance booth, queuing in line for hours and filling out forms, is now easily and securely done over the mobile phone in just a few seconds.

This move by Ant Financial through AlipayHK and GCash, makes the mobile remittance industry more exciting as the Santander bank had just recently also showcased its one OnePayFX app that uses Ripple’s xCurrent.