Banco Bilbao Vizcaya Argentaria (BBVA) does not close the doors to blockchain technologies as an important innovation for its business model. Its executives’ vision of cryptocurrencies can explain the reasons for its growth and financial solidity.

In an interview with CNBC, Francisco Gonzalez Rodriguez, Executive Chairman of BBVA, explained that cryptos are perfect for the economic system, but because of their characteristics they are also especially attractive for criminals who want to hide behind their anonymity and decentralization to commit criminal acts:

“Cryptocurrencies are perfect, but are used for bad purposes today, so [one has to be] careful. Blockchain and distributed ledger technologies are also perfect, they are big, big tools. But the cryptocurrencies must be understood, [especially] the corner where the malpractices are going.”

According to Mr. Gonzalez, cryptos are the result of the “incredible digital revolution” that modern society is experiencing. However, it could be concluded that studying the panorama in the short term, Mr. Gonzalez shares the opinion of the majority of banks that think cryptos are still too immature to be globally accepted.

In statements for the Spanish newspaper “El Economista,” Carlos Torres, CEO of BBVA explained that although he was enthusiastic about blockchain applications, the technology “is not mature and has significant challenges.” 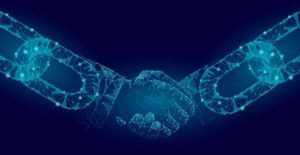 BBVA is one of the most important banks in Spain and the world, occupying the number 41 in the list of the most important and profitable. Currently, its total assets are valued at 805.74 Bn$. In April, BBVA became the first bank to issue a loan using blockchain technology, processing a credit of 87 M$.

Likewise, after this experience and in spite of being aware of the risks, the bank valued the benefits obtained and issued a second blockchain-based loan of $117 million for civil engineering firm ACS Group.

Are Cryptos Really THAT Bad or Dangerous?

BBVA continues to explore the uses of cryptocurrency and despite the “fear” that they could be used by criminals, an Interpol report named “Why is Cash Still King” explains that criminals actually prefer to use traditional fiat money rather than choose cryptocurrency to commit crimes:

“Although not all use of cash is criminal, all criminals use cash at some stage in the money laundering process …
While the world is looking with concern at the possible misuse of virtual currencies by criminals, this report may seem somewhat unusual in that it is not highlighting a new phenomenon or an emerging risk: money laundering and cash have been the stock of criminals for decades. However, this is precisely what makes the findings of this report of interest: in spite of the changing face of criminality, with significant threats now stemming from new technologies, money laundering schemes detected by law enforcement are still largely characterized by traditional techniques, in particular, the use of cash.”