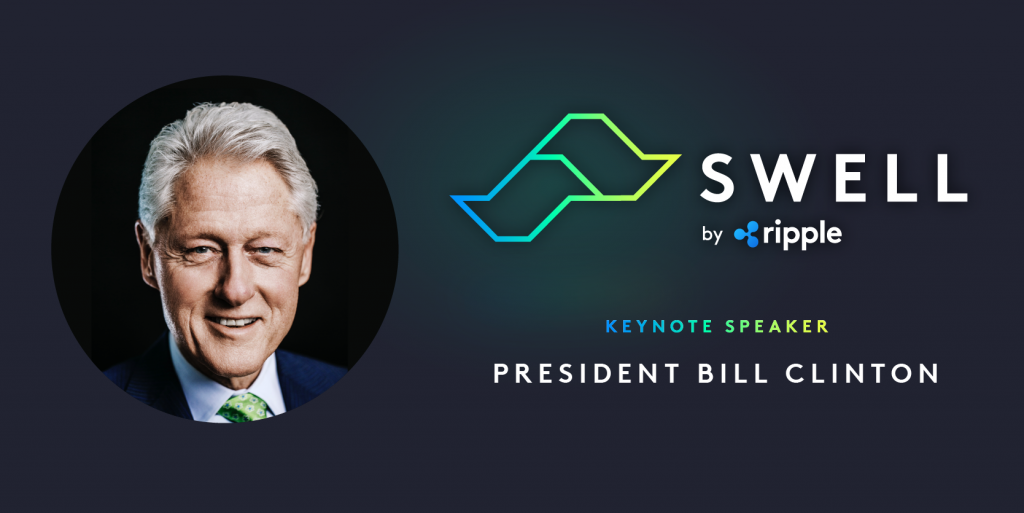 Bill Clinton, the 42nd President of the United States, will deliver a keynote address at the upcoming Ripple Swell conference. The former U.S. President will also participate in a question and answer (Q&A) during the meeting.

Clinton: The President who Presided Over the Dawn of the Internet Age

Former president Bill Clinton helped usher in a period of extreme growth and adoption of the internet. When groundbreaking technology and regulation were on a collision course, Clinton’s activities shaped the internet to what it is today. He also gave communities and individuals access to the internet by initiating programs which bridged the digital divide.

Ripple commenting on the importance and relevance of blockchain technology and digital assets said:

These learnings are perhaps more relevant now than ever before. Like the Internet boom of the 90’s, we are at an impasse: digital assets and blockchain technology offer a way for value to be exchanged as quickly as information – creating more financial inclusion and economic opportunity. However, with this new technology comes with the potential for concern, requiring thoughtful policy to protect consumers from risk without hampering innovation.

About the Ripple Swell Conference

The Swell Conference 2018 will highlight the following three crucial areas. These areas consist of the following:

This year’s Swell Conference will hold in San Francisco, California, from October 1 – October 2, 2018. There will also be a question and answer (Q&A) session that will be moderated by Gene Sperling. Gene Sperling was the former National Economic Council Director and Advisor under former presidents Bill Clinton and Barack Obama. Sperling is currently on Ripple’s board of directors.

Ripple continues to pursue an aggressive expansion agenda that aims to see increased use of both the Ripple ledger and the XRP cryptocurrency. Recently, the company partnered with pop icon Madonna on the occasion of her 60th birthday, to raise funds for vulnerable children.

Apart from charitable activities, Ripple is also trying to enter into new markets like India and Malta as the company strives to create a global presence for the XRP cryptocurrency. The company also recently announced its Q2 2018 performance with a decline in sales but an increase in user adoption. A recent Weiss report revealed that XRP is the best cryptocurrency for moving funds between exchanges.