After days of unrest in the industry, and the perpetuation of a seemingly endless downtrend, the crypto market at large has failed to undergo a bullish breakout, with Bitcoin (BTC) continuing to falter at $3,400. Since Ethereum World News’ market update posted on Monday, the aggregate value of all cryptocurrencies has fallen to $109 billion, down 1.8% from the day prior. Trading volumes are slightly up over Monday, up by $0.2 billion to $6.9 billion adjusted ($13.2 billion unadjusted) in daily volumes.

The past day has seen BTC undergo a rapid sell-off in the morning, catalyzing a multi-hour lull that saw the asset hang around the $3,400 price level, where it remains at the time of writing.

As is normally the case, altcoins followed suit in this recent sell-off, with prominent crypto assets posting losses in the low-single-digits (percentage-wise). XRP, for instance, is down 0.5% in the past 24 hours, slightly beating the performance of BTC. On the other hand, Stellar Lumens (XLM), Bitcoin Cash (BCH), Litecoin (LTC), and Monero (XMR) have underperformed the foremost asset in this industry, posting losses that range between 2% and 4%.

Amid this continued crypto market sell-off, reports have indicated that short sellers, bears, in other words, have begun to bolster their short-side positions. More specifically, according to data compiled by DailyFX, routed by MarketWatch’s Aaron Hankin, cryptocurrency traders have begun to scale back on their open BTC holdings. At the same time, as aforementioned, speculators have accentuated their continual bearish sentiment by keeping their shorts open.

Nancy Pakbaz, an analyst at the Chicago, Illinois-based financial institution was quoted as saying on the matter:

Retail trader data shows 70.1% of traders are net-long with the ratio of traders long to short at 2.35 to 1. The percentage of traders net-long is now its lowest since Nov. 28 when bitcoin traded near $4,200.66.

Although Pakbaz’s comment, which indicates that a multitude of investors are still “net-long” on BTC, isn’t bearish in and of itself, the DailyFX representative added that the “number of traders net-short is 14% in comparison to Monday,” adding that this same statistic is up 21.4% since last week. 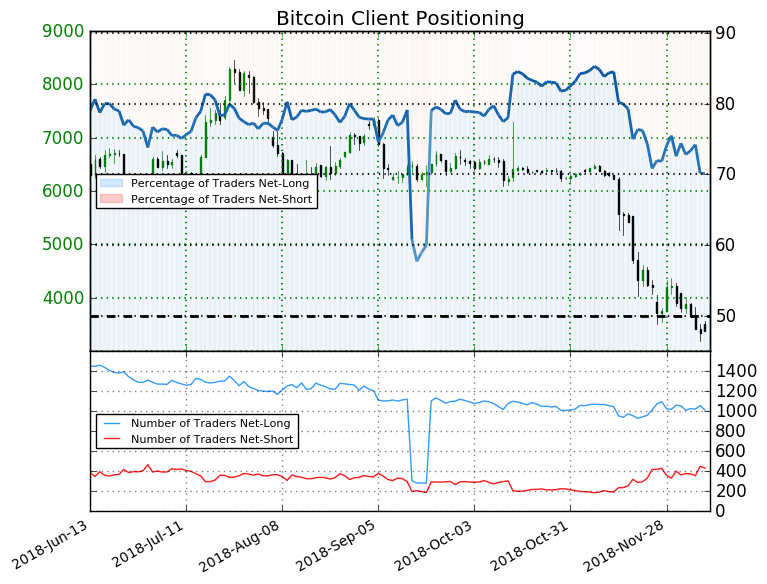 This clearly indicates that short-term speculators are bracing for another bout of capitulation — the umpteenth one in a month’s time.

Yet, as seen by the action seen in Bitcoin price throughout its relatively short history, the growing number of shorts could actually be bullish(ish), as a so-called “short squeeze” could occur. Such a move should catalyze a multi-percent move higher for BTC, but it remains to be seen whether a squeeze is in crypto’s cards.

MarketWatch’s in-house crypto reporter also drew attention to an inquiry regarding Ethereum (ETH) from the U.S. Commodities Futures Trading Commission (CFTC). In a statement, the prominent American financial regulator claimed that it was seeking the public’s opinion on digital currencies, most notably Ethereum (ETH). In a public release, the somewhat crypto-friendly body wrote:

It is believed that the entity is seeking feedback to precede its ruling on an Ether-backed vehicle, such as purported Ethereum futures contracts backed by ErisX, CBOE, and potentially Nasdaq, who recently its intention to bring “crypto 2.0 futures” to market. Interestingly, a number of crypto commentators recently took to Twitter to allude to the theory that if Ethereum-backed futures, even a non-physical instrument, goes live, the aforementioned blockchain’s native asset may actually fall, due to “rehypothecation” — a common sight in traditional financial industries.

If CME lists $ETH futures soon, is that bullish or bearish for ETH? https://t.co/XHrGOc4bYJ