Bitcoin Can Reach $50,000 in 2018 Based on Three Factors, Says Investment Manager

Just like Bitmex CEO, Arthur Hayes, Anthony Pampliano is sticking to his $50,000 Bitcoin price forecast for 2018. Pompliano, a partner at Morgan Creek Digital Assets, believes that the top-ranked cryptocurrency has an exciting last half of the year in store for all stakeholders. Presently, BTC is trading slightly below the $8,000 after a slight pullback caused by the SEC rejection of the Winklevoss BTC ETF application.

In a Skype conversation with Cheddar, Pompliano said:

According to Pompliano, three crucial factors will drive the price of BTC to the $50,000 milestone. These factors are – human psychology, Bitcoin ETF speculation, and an influx of big-money investors.

Pompliano explained that from a psychological perspective, BTC traders prefer round figures. Thus, within any thousand-dollar price range, there was always the tendency to push the value above the next milestone. During BTC’s recent push above $8,000, it broke through three consecutive resistance levels without becoming overbought.

Since the end of June 2018, the market has become awash with positive sentiments which have coincided with fortuitous circumstances such as the trade standoff between China and the United States. At the center of the rumors and speculations in anticipation of an SEC-approved Bitcoin ETF.

On Thursday (July 25, 2018), the SEC rejected the Winklevoss BTC ETF filing. In his analysis before the SEC’s decision, Pompliano revealed that an SEC-approved Bitcoin ETF in 2018 was unlikely. However, speculation about a future approval was enough to sustain the positive sentiment on that count. 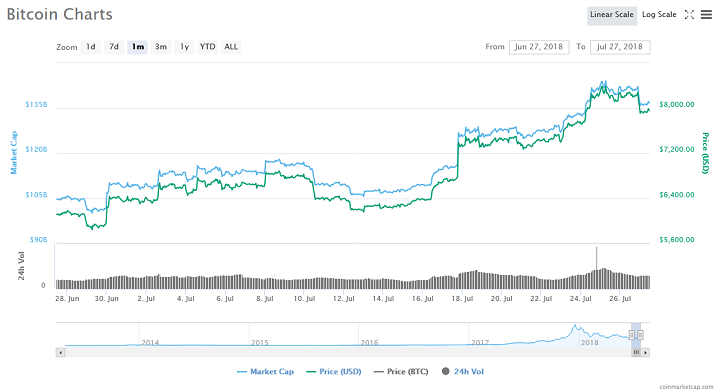 Finally, Pompliano mentioned the influx of institutional money into the market. As a partner at Morgan Creek Digital Assets, he has a front row seat to the activities of big-money investors in the space. According to Pompliano, cryptocurrencies aren’t alluring only to retail investors but to hedge funds as well, who are looking for the opportunity to make huge profits in a short amount of time.

Many experts agree on the fact that institutional investors will cause a significant price surge in the market. However, big-money players haven’t fully committed to the market due to some nagging problems concerning custody and regulations.

Do you agree with Anthony Pompliano’s analysis? What is your end of year Bitcoin price forecast? Keep the conversation going in the comment section below.