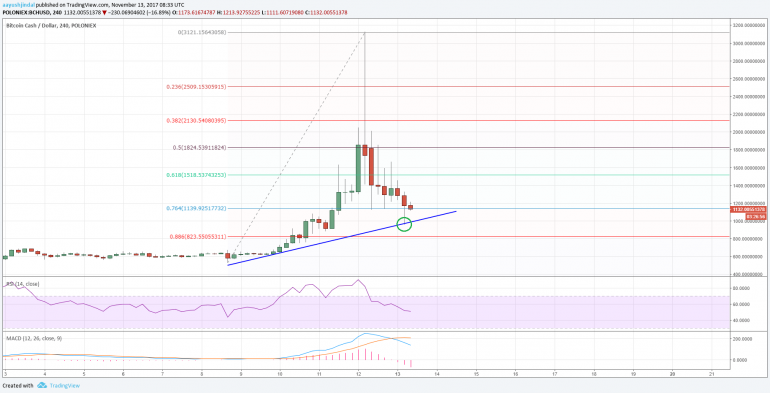 Bitcoin cash price after trading above the $3000 level against the US Dollar (tethered) found strong offers. BCH/USD is now holding an important support at $1000.

There were nasty gains in bitcoin cash price during the past 5-6 sessions toward $3000 against the US Dollar (tethered, data feed by Poloniex). The price traded to a new all-time high of $3121 before it faced a strong sell wall.

There was a test of a major bullish trend line with support at $1000 on the 4-hours chart of the BCH/USD pair. The pair held the trend line support, but struggling to remain above the 76.4% Fibonacci retracement level of the last wave up from the $560 low to $3121 high.

On the other hand, if it fails to hold $1000, it could trade toward the $800 support area. In the mentioned scenario, there is even a possibility that the price might test the $650 support as well.

The overall trend is now bearish unless BCH moves back above $1500. The 4-hour RSI for BCH/USD is now below 50 and heading south, which means more losses are possible.