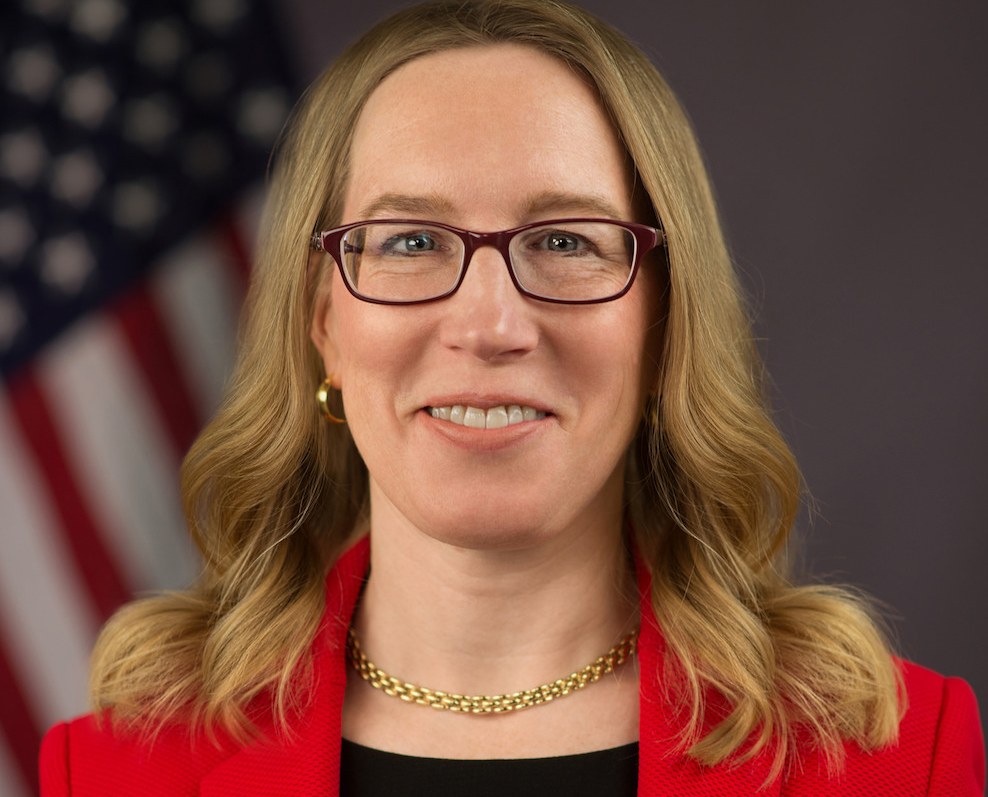 US SEC Commissioner Hester Peirce’s latest speech shows she is still pushing hard with her colleagues on a bitcoin ETF approval and crypto-friendly token-sale regulation.

Hot on the heels of Securities and Exchange Commission (SEC) Commissioner Robert J Jackson Jnr’s interview with US Capitol news outlet Roll Call, in which he shared his thoughts on a bitcoin ETF being approved “eventually”, the crypto market has gleaned further insight into the SEC’s thinking from fellow Commissioner Hester Peirce.

Yesterday (8 February), in a speech delivered at the University of Missouri School of Law to a gathering mulling over the subject of Protecting the Public While Fostering Innovation and Entrepreneurship: First Principles of Optimal Regulation, she had some critical words for her fellow commissioners and encouraging ones for crypto enthusiasts.

It all adds up to good news for crypto. Peirce indicated she has crypto investors’ collective backs as she continues to push her colleagues on crypto exchange traded products and crypto-friendly token sale regulation.

Peirce earned herself the title CryptoMom last year following her dissent on the decision by the SEC to reject approval of the bitcoin ETF proposed from the Winklevoss twins.

It’s worth quoting part of her speech in detail:

“There is also great interest in exchange-traded products based on bitcoin or other cryptocurrencies. As I have mentioned in the past, I am concerned that our approach with respect to such products borders on merit-based regulation, which means that we are substituting our own judgment for that of potential investors in these products. We rightfully fault investors for jumping blindly at anything labeled crypto, but at times we seem to be equally impulsive in running away from anything labeled crypto. We owe it to investors to be careful, but we also owe it to them not to define their investment universe with our preferences.”

That’s in line with the thinking shared in her dissent statement in which she argued that the logic of the majority decision – the vote was 3:1  – was that today there would be no commodity ETFs, such as those holding, or synthetically replicating, crude oil and gold as their underlying asset.

Peirce is essentially saying the SEC is in danger of unwittingly or otherwise acting as investment advisor as opposed to confining itself to considering matters such as the fair operation of capital markets and investor protection.

Her fellow commissioners may beg to differ on that. Following the rejection of the Winklevoss ETF the SEC published a staff letter addressed to two of the major fund industry trade associations. It set out the areas of concern a bitcoin ETF issuer would need to address in order to gain approval. The letter has five headings: valuation; liquidity; custody; arbitrage; potential manipulation and other risks.

With Fidelity Digital Assets and Bakkt both coming on stream soon, some of those areas of concern are being addressed. The VanEck Solid X physically settled bitcoin ETF, refiled at the beginning of the month, is also thought to have moved much further towards meeting with the SEC’s concerns.

But Peirce gave a hint that she wants to encourage her colleagues to move forward quickly in one crucial area that could help bring an ETF closer to seeing the daylight – exchange regulation.

Here’s the relevant excerpt from her speech:

“Our interactions with cryptocurrencies are not limited to questions about the regulation of token sales and disclosures. Closely linked to the question of whether tokens are securities is the question of how the platforms on which tokens trade should be regulated. Some of these platforms want to register with us, and I am eager to make progress on this front. There are features of crypto trading platforms that may differ from exchanges or alternative trading systems designed for traditional securities. To identify how regulation may need to change to accommodate these differences we will need to improve our understanding of how the platforms operate.”

Her choice of language –  “eager to make progress” – suggests some urgency here, which the industry will certainly welcome.

Industry watchers will have noticed that the SEC on the one hand has been slow to regulate crypto exchanges, while on the other hand points to the lack of the characteristics of a regulated trading environment, such as market surveillance and segregation and protection of client funds.

Steps towards greater regulation certainly requires the SEC to “improve our understanding” as Peirce puts it, but surely they could do that by taking a more proactive approach by granting themselves minimal oversight powers in order to have staff monitoring operations to study and familiarise itself with how crypto exchanges work across the piece.

Most of Peirce’s remarks were related to how to regulate initial coin offerings (ICOs) and her frustration that the SEC could end up stifling innovation comes through in her remarks.

She worries that the Howey Test to determine what is or is not a security, although a good fit for many token sales, for others it may not be.

To remind readers, the test has four prongs as highlighted in the following statement from the 1946 SEC v W. J. Howey Co. case: “a person invests his money in a common enterprise and is led to expect profits solely from the efforts of the promoter or a third party”.

Peirce suggests it could be that new frameworks will have to be developed to cover all occurrences of token offerings. In particular she notes those cases where the token may be a security, but it nonetheless has a direct usage in the workings of a platform (corporation). She cites the example of the Basis project which has been forced to return $133 million to investors because it could not comply with securities regulations as demanded by the SEC.

She is plainly sympathetic to the project’s problems: “I am not going to comment on what I think about the merits of any particular project or how the securities laws apply to it, but my antennae will go up when apparently legitimate projects cannot proceed because our securities laws make them unworkable.”

Messaging app Kik’s KIN token could find itself in a similar position after the SEC gave notice of enforcement action against it for violating securities law by not registering the KIN token sale.

Peirce appears to be on the side of projects like Kik, although she can’t say as much. The KIN token is already being used in apps in the Kik ecosystem as a utility token.

This is how Peirce puts it: “Given the role that individuals play in some token environments, either through mining, providing development services, or other tasks, the SEC must take care not to cast the Howey net so wide that it swallows the “efforts of others” prong entirely.”

Democrat and Republican SEC commissioners not so far apart

But the good news doesn’t end there. There’s signs that the votes this year on a bitcoin ETF might be tighter than thought.

The SEC currently has four members at the moment.

Jay Clayton is the chairman and politically speaking an independent, although given that he was appointed by President Trump, Republicans tend to expect him to vote with the Republican commissioners (he’s done so only 37% of the time so far).

There can be no more than three commissioners from either party in order to maintain a bi-partisan approach.

As it happens though, the Republicans have a majority.

Peirce is a Republican of a libertarian persuasion, following in the footsteps of her Dad, also an economist, who stood for the governorship of Ohio for the Libertarian party in 2006.

Peirce also wrote the go-to book for Republicans – Dodd-Frank: What It Does and Why It’s Flawed – on the financial regulations introduced after the financial crisis. Republicans want to rollback that legislation and her book (with James Broughel) is the bible on that, so you could say she’s fairly well-connected politically.

Elad Rosiman, appointed by Trump and as with Peirce confirmed by the Senate in 2018, is also a Republican.

Jackson is the sole Democrat.

The interesting thing about his comments to Roll Call on 6 February was the use of the words “I hope so”, although many have homed in on ETFs being approved “eventually” as the most significant word in the sentence, despite its open-ended nature.

To repeat in full, Jackson said: “Eventually, do I think someone will satisfy the standards that we’ve laid out there? I hope so, yes, and I think so.”

That shows positive intent and perhaps, contrary to Peirce’s worries about “merit-based regulation”, the Democrat might be more on her wavelength than she assumed. Pro-crypto Democrat governors were elected in the mid-terms in California (Gavin Newsom) and Colorado (Jared Polis).

With Fidelity Digital Assets in place as early as next month and Bakkt perhaps not too soon after given its acquisition and hiring spree reported by Ethereum World News today, Peirce may not be the only commissioner voting to approve the next bitcoin ETF to come knocking.

In a profile on Hester in the Wall Street Journal last month, she is reported to have described herself as a “free-range mother”.

Ms. Peirce, who doesn’t have children, has embraced her new nickname and recently told a group in San Francisco that she would be a “free-range mother,” while the SEC was a “helicopter mom” trying to protect the population from investments that look too exotic or risky.