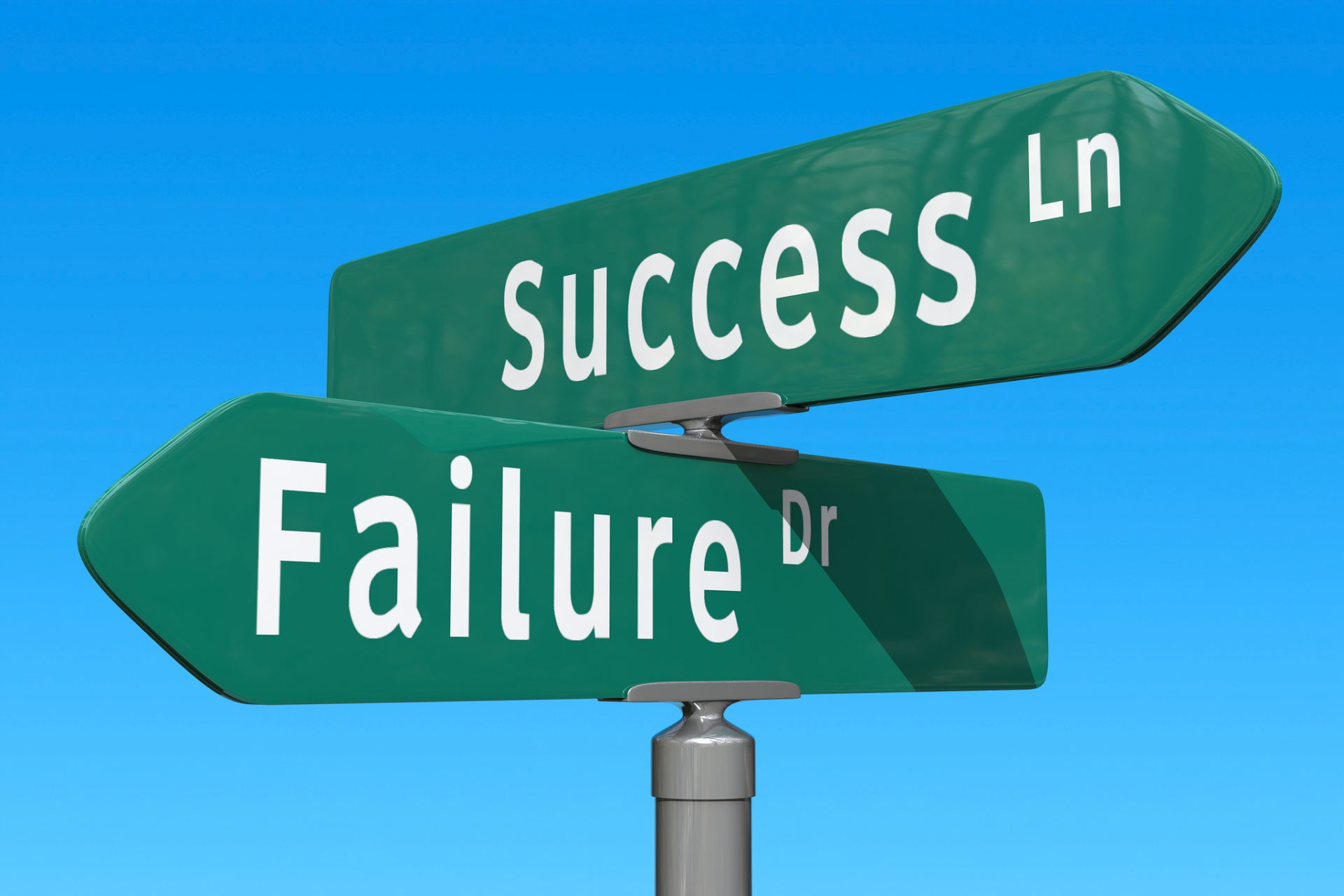 Bitcoin maximalists reveal Proof of Keys failures but is it all just FUD?

Proof of Keys Celebration day has been and gone, so which exchanges failed the stress tests?

To briefly recap, 10 years ago on 3 January bitcoin’s genesis block was mined and this was the day picked for the so-called Proof of Keys Celebration.

The brainchild of Trace Mayer, the proof of keys (PoK) event was conceived as a sort of stress test for crypto exchanges and as an educational project to encourage crypto holders to take full control of their private keys in a declaration of monetary sovereignty.

There are suspicions in some quarters that there may be exchanges operating a form of fractional reserve banking, in which they loan out or otherwise make use of the deposits of their customers.

If that were the case it would mean that the bitcoin or other crypto that customers thought were in the safe custody of their exchange of choice, were in fact effectively in the hands of someone else.

A new date for the crypto calendar

It is a laudable initiative but the list that has so far been announced to the world as identifying failing exchanges is coming in for criticism for its paucity of evidence.

However, it does look like a crypto institution has just been born, judging by the success of the initiative in garnering the support of industry influencers and corporates and critically those ordinary folk who keep at least a portion of their crypto on exchanges.

The proof of key day appears to have succeeded in encouraging a substantial number of owners to move their crypto off exchanges as a way of exposing those that may not be holding the private keys of their customers’ crypto assets.

And those who are not satisfied with merely shifting their bitcoin to hard wallets such as Trezor or Ledger, can also set up a full node to independently confirm that the withdrawal transaction is kosher, instead of relying on the work of a third party.

So how did it all go down, is the failure list fair?

Unfortunately there is no way of gauging exactly how many people took part in the event, although there was a noticeable increase in transaction count on the day. Mayer tweeted the chart below: 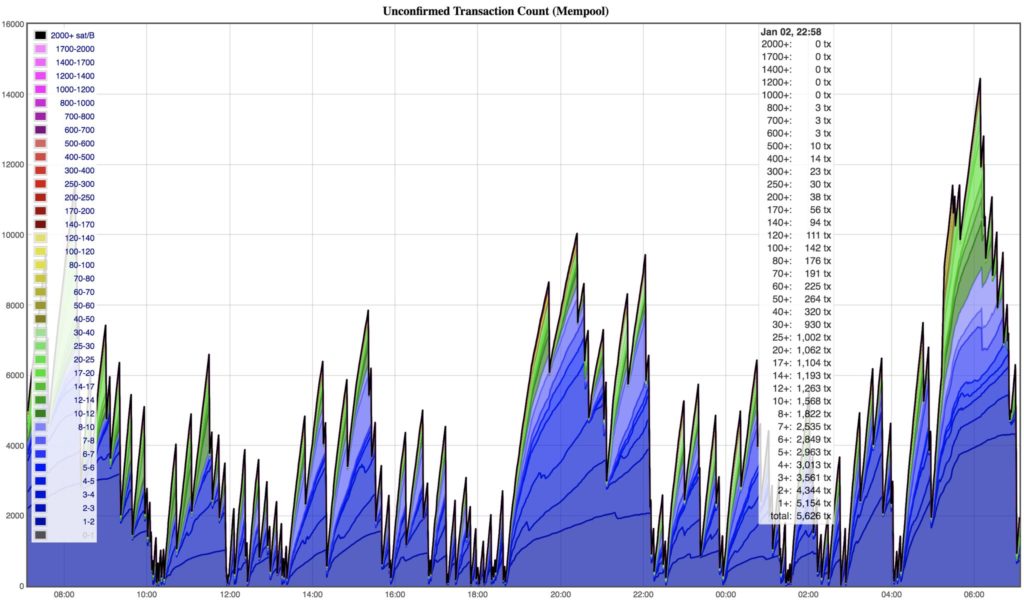 And data compiled by bitinfocharts shows a rise of nearly $2billion in bitcoin sent in USD compared to the 2 January:

Preliminary reports from Mayer assert that a number of exchanges have failed the test.

HitBTC, Bitfinex, Poloniex, Purse.io, Robinhood and Coinbase are all singled out as PoK failures. Here’s the tweet from Mayer:

Added a Failures section to https://t.co/7i8F58PS38#failures

Anyone else encountered any unusual issues or problems with #ProofOfKeys withdrawals?

Starting with Hong Kong-based HitBTC, its apparent failure appears to be based on reports from a number of individuals who say they had their accounts frozen in the days leading up to the 3 January.

HitBTC for its part denies the allegations but is yet to publish a clear statement to dispel the accusations, but promises to do so. Some of its supporters dismiss the claims as pure FUD.

Got it. We believe it's worth to publish an article, which will explain how these presses actually confirm that it's safe to use our platform. Stay tuned for updates in our blog. 🙂

EthereumWorldNews reported on the complaints from HitBTC customers earlier in the week, citing posters on reddit experiencing difficulties actioning withdrawals from the exchange.

According to emailed comments from HitBTC to cointelegraph, the frozen accounts were a result of routine  know-your-customer (KYC) and anti-money laundering (AML) checks.

Next up is Bitfinex, an altogether bigger fish. Mayer’s inclusion of this much more high profile exchange seems to be based primarily on a statement the exchange made on Twitter admitting to some operational difficulties:

We are aware of some issues on our platform and are working quickly to resolve. Please be assured all funds are safe. We appreciate your patience.

That was followed by a tweet which said: “We are back online. There was an issue with the order gateways during an upgrade, and have worked quickly to fix. We apologise and thank you for your patience”

As it happens,  Bitfinex is carrying out a data migration from Amazon Web Services (AWS) in a couple of days time (7 January), and as a result the exchange will be down for 7 hours, so the outage may be related to that.

Bitfinex is a controversial exchange because of its close relationship with Tether (some would say they are effectively one and the same company) and persistent doubts about whether the stablecoin is fully backed by US dollars as it claims.

Another major exchange, Poloniex, which was bought by Goldman Sachs-backed Circle in February last year, also makes it onto Mayer’s list of shame, but again the evidence is thin.

The PoK website links to one user who was being made to jump through hoops to withdraw his crypto:

“I’ve had problems with @Poloniex the last four days making me jump through hoops trying to get transfer. Everyday is a new hoop and a day delay. I’ve never had this problem before with them in the past.”

However, in the tweet thread there are other complaints but they are, by all accounts, not particularly out of the ordinary for Poloniex in terms of platform performance and its customer support outreach.

Small exchange and payments outfit Purse.io, which counts Roger Ver among its early investors, was also accused of stopping withdrawals, according to at least one Twitter poster:

@TraceMayer It looks like #ProofOfKeys has impacted @PurseIO somehow. They have halted withdrawals without reasonable explanation. 🔑 pic.twitter.com/qAyeg2kWRN

And then there were the problems reported on Coinbase Pro (formerly GDax), which the exchange said was to do with its order book not working properly:

Service was restored at 19:30 PT, 1 hour after the original incident https://t.co/0H0stqNPtX

The exchange had similar issues on Christmas Day, according to an earlier tweet, so it may just be a coincidence being played up by centralised exchange haters among the bitcoin maximalists, of which Mayer would be but one of many.

[status] Investigating: We are currently investigating issues with trading on the BTC-USD order book. https://t.co/xIjStLRlCw

Strangely, although the Coinbase Pro tweet on 3 January admits to an issue, there is no such incident reported on the official status page. Instead it continues to say “no incidents reported for this month” (see screenshot below). Presumably whatever difficulties it had on the day of the proof of keys event, it doesn’t want to broadcast them for fear of the difficulties being interpreted as a PoK failure. 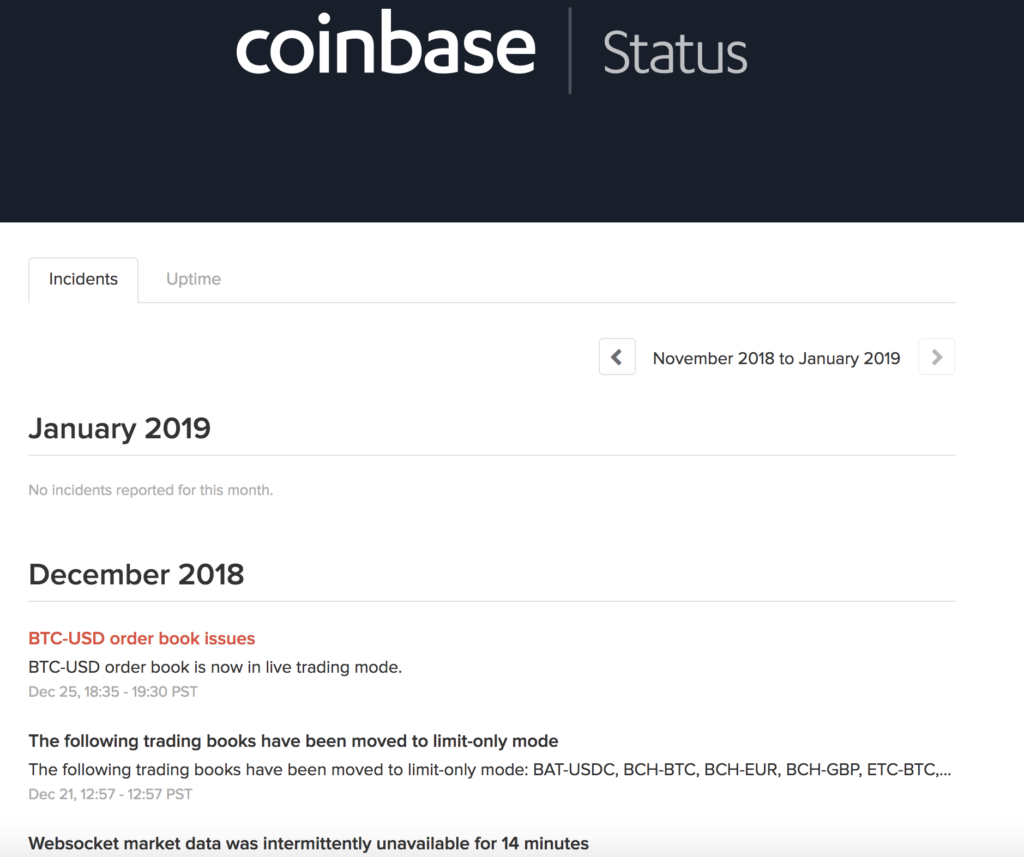 The inclusion of relative newcomer to crypto Robinhood in the Trace Mayer list is based on a solitary tweet from Ben Westgate, that reads: “Coin Withdrawals  At this time we don’t support coin withdrawals, though we plan to do so in the future.”

Robinhood chief executive Vlad Tenev has previously attacked crypto exchanges for their high fees and offers its customers commission-free trading. Robinhood connects to full-blown crypto exchanges in order to offer its markets but has not revealed which ones.

PoK all FUD or does it keep exchanges on their toes?

The PoK exercise has certainly caught the imagination of the cryptosphere, but from the evidence curated at proofofkeys.com it is not entirely convincing that the day has exposed exchanges to be engaged in a form of fractional reserve banking.

There was certainly no equivalent of a bank run, much to the relief of everyone in the crypto space because an exchange failure at this juncture is probably the last thing a fragile market needs.

An ongoing poll started by Mayer on Twitter on 3 January asks: “How did you interact with #ProofOfKeys?”

At the time of writing 3,045 have responded, showing a majority already “hodl all crypto”, which presumably means they have direct control of their private keys as opposed to being hodlers in the sense of long-term investors. Here’s the results so far:

Caitlin Long, a Wall Street veteran and a leading crypto influencer and supporter of the PoK effort, has drawn attention to the custody regulations operating in Bermuda for “digital asset businesses”.
She found that the rules in the offshore jurisdiction state that client funds can be comingled with those of the company, which is extremely poor practice as client funds should ideally be segregated.
Here’s the third part of her 12-part tweet thread:

3/ …and here’s another gem, in a section titled Account Segregation

: “While keeping client assets separate from its own, DABs may commingle client assets…” Believe it or not, the quote in the prior tweet was in a section titled Proof of Reserves! There’s a lot of great…

Binance signed a memorandum of understanding with the Bermuda government in April last year in a major coup for the Caribbean island as it seeks to make itself attractive to crypto businesses.
So if PoK has achieved anything it has at least shined a light into the deeper recesses of the exchange industry, serving to put them on notice that customers expect to see the highest standards.
The customers of centralised exchanges expect to be able to get access to their funds when they want and  to their private keys also.
But that last part may be asking too much, which is why it has never been a good idea to keep assets on exchanges for other than trading reasons.
Coinbase customers for example who hold BTC with it are still waiting patiently for the exchange to release Bitcoin SV weeks after the fork took place.
And of course exchanges can freeze and close accounts with not so much as the courtesy of explaining why, which is what has just happened to Gab founder Andrew Torba.