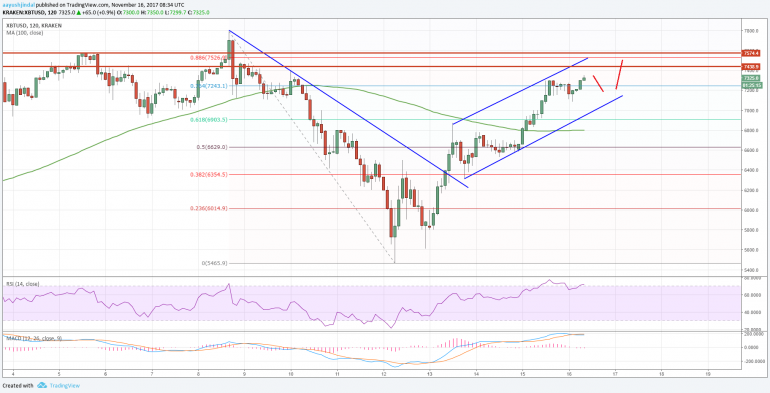 Bitcoin price is back in the bullish zone above $7000 against the US Dollar. BTC/USD might soon attempt an upside break above $7500 once again.

There was a sharp downside coercion in bitcoin price below the $6000 level against the US Dollar. The BTC/USD pair traded as low as $5465 (data feed by Kraken) where buyers appeared and protected further declines.

The pair started a new upside move wave and moved above a couple of important resistance levels such as $6000 and $6500. There was a proper close above the 50% Fibonacci retracement level of the last drop from the $7790 high to $5465 low.

The best part was the close above $6800 resistance and the 100 simple moving average (2-hour). The upside move was initiated once there was a break above a key bearish trend line with resistance at $6380 on the 2-hours chart of BTC/USD.

The pair is now trading near the 76.4% Fibonacci retracement level of the last drop from the $7790 high to $5465 low and looks set to extend gains in the near term.

There is an ascending channel forming on the same chart with support at $7150. As long as the channel support is intact, there is a chance of BTC surpassing the $7440 resistance area. Above $7440, the pair might even attempt a break of the $7500 resistance in the near term.

The overall market sentiment is very positive above $7100 and $7000. The 2-hour RSI for BTC/USD has reached 72, but not showing any major correction signals from the $7300 level. Therefore, there are chances of more gains toward $7500 in the near term.