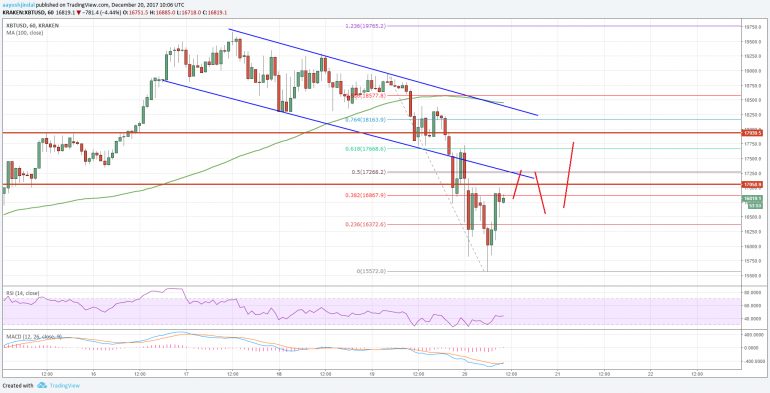 Bitcoin price started a downside correction from $19,600 against the US Dollar. BTC/USD tested the $15,700 support and is currently recovering.

After a nasty upside move above the $19,600 level, bitcoin price faced strong sell offers against the US Dollar. The BTC/USD pair failed to test the $20K level and started a downside move below the $19,000 level.

The decline was substantial as the pair traded below the $18,000 and $17,500 support levels to close below the 100 hourly simple moving average.

During the downside move, the pair broke a descending channel with support at $17,500 on the hourly chart. It opened the doors for more losses and the price traded below the $16,000 level.

Should the price continue to move higher, then the next major resistance could be $18,000 and the 100 hourly simple moving average, which is positioned at $18,500.

Overall, it seems like the price might extend the current recovery, but a break above the $18,000 level won’t be easy. The hourly RSI for BTC/USD is flat above 40, but with no major bullish signals.

safe traders and do not overtrade!