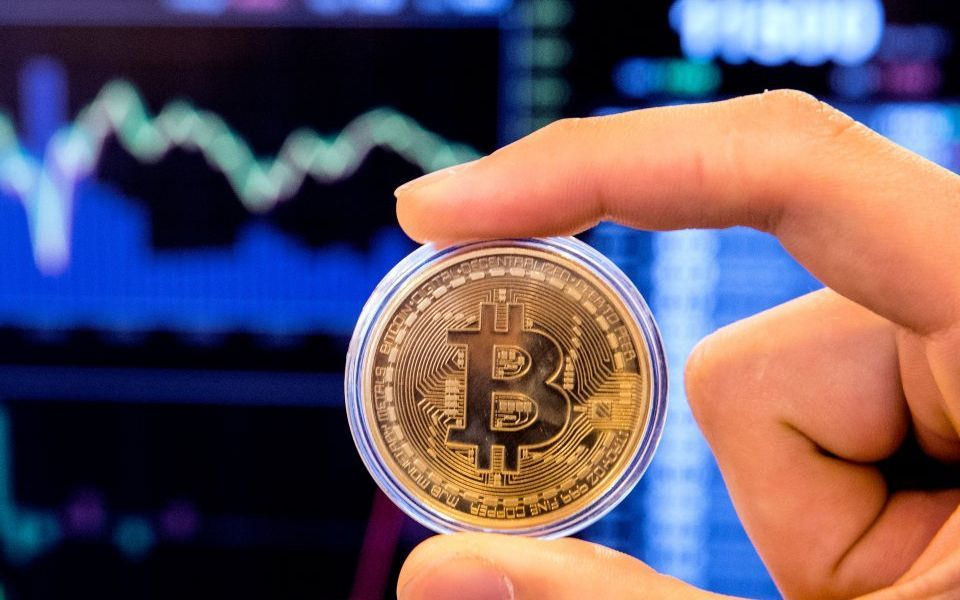 Bitcoin has been treading water again and the last time that happened, in November at the $6,000 level, it was the prelude to a sharp fall.

If that were true it would probably be good news for bitcoin as it would indicate that the final buyer capitulation required before there can be a sustained move higher was at hand.

Although such an outcome is confirmed in the technical analysis, so too is a bear market that has months more to run, even dragging on into 2020. The view one aligns with partly depends on whether you are looking at the fractals or the bands, as we explain below.

Let’s begin with the repeating bearish pattern, namely the descending triangle, that has got many traders pondering on their meaning this past week.

Cutting to the chase, a descending triangle is a classic bullish formation as it describes a historical price movement dominated by successive lower highs.

Pulling out to the 1-day chart, such a triangle can clearly be seen in play throughout last year. 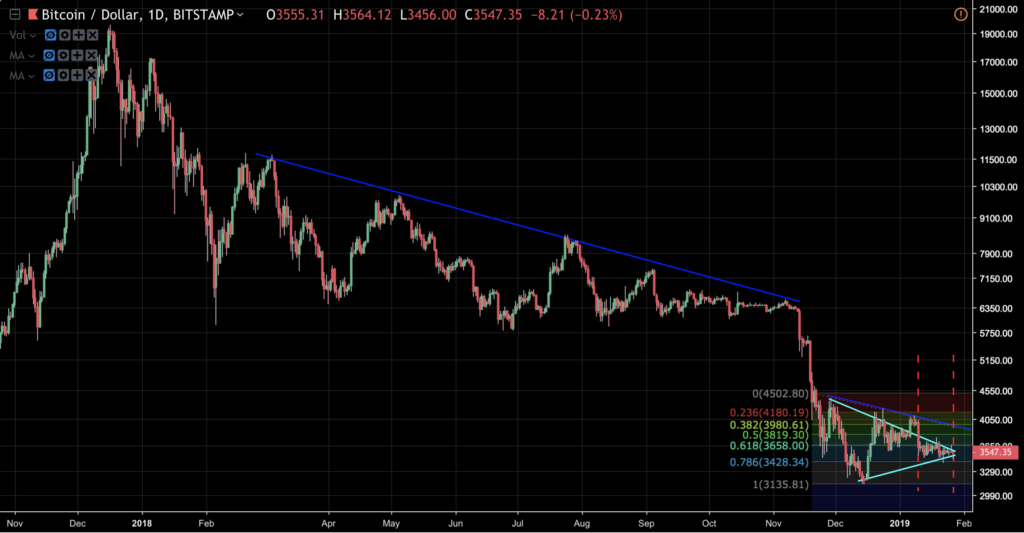 The narrowing out of the triangle represents a weakening of the bulls, with morale sapped by successive rejections and failures to recapture previous highs. On the other hand, it tells the tale of bears being continually strengthened.

Just before the drop, the bitcoin price was rangebound between the $7,000 and $6,000 level for the period from August to November last year.

Now it appears something similar is happening, but in compressed form.

In other words, the descending triangle pattern begins to repeat from late November at the $4,400 level, as seen above. 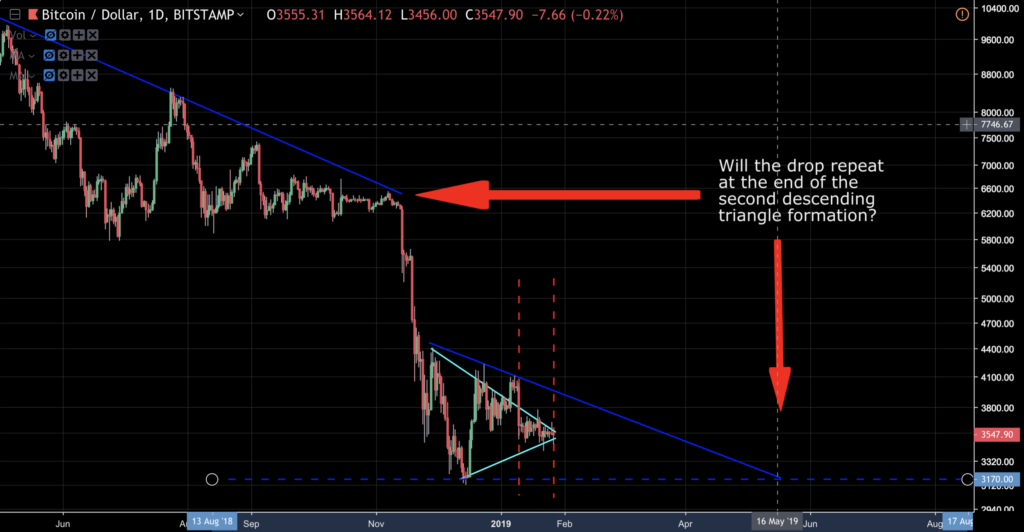 But where will the base of the triangle be? The lows of mid-December last year at $3,137 would be a reasonable supposition with support currently consolidating at $3,500.

However, as seen in the second blue trend line it is by no means certain that a second descending triangle is confirmed with further rejections of prices at $4,000 not yet in evidence.

But if a number of lower highs do re-appear then it should run its course by May, finding a price at around $3,150. So that could be a possible bottom. But taking price stuck around the $3,500 level, we could draw a trend line with a more acute angle, with its right apex appearing somewhere in the current price, as shown by the light blue trend line (we’ve drawn a lower second light blue line from the December through to show the narrowing wedge).

Here’s a zoom in to the 4-hour chart: 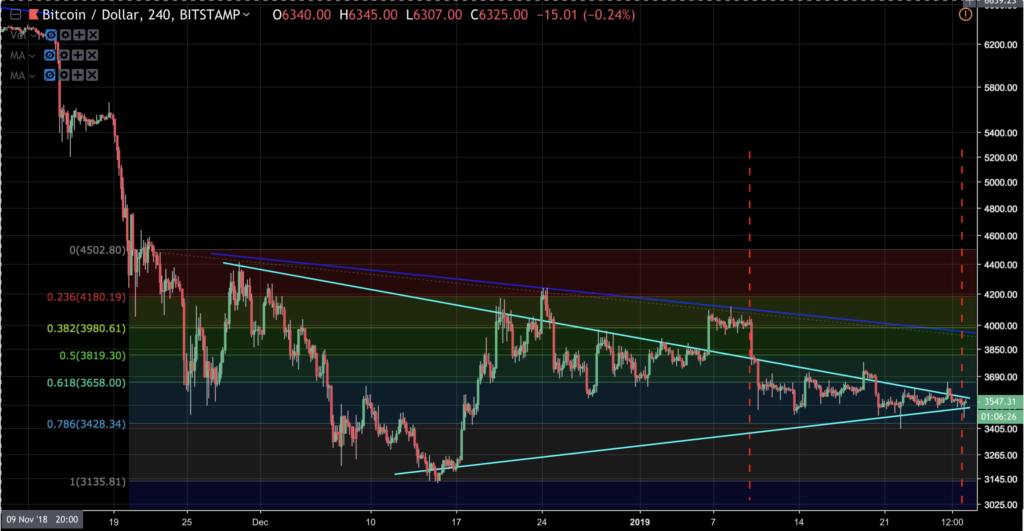 If the latter is correct and we assume the overarching downtrend is still intact, then we could expect a strong move to the downside imminently.  Those who prefer the spring take-off thesis in May thesis might see a break higher at this juncture.

The vertical dashed red lines show the extent of the rangebound trading from 10 January to 27 January.

Note that the rangebound trading maps to the 0.786 and 0.618 Fibbonaci retracement levels.

It we see a capitulation soon then it would probably put the base of the second descending triangle in danger, with a return to a testing of $3,178. The triangle pattern could repeat for a third time, taking the price below $3,000 to perhaps $2,500, which is the view of ADVFN chief executive and bitcoin enthusiast Clem Chambers, as outlined in a piece for Forbes earlier this week. He sees that as confirmation of his previously stated entry point at $2,500.

Perhaps it is anyone’s guess how many iterations there might be of the repeating pattern – or fractal as technicians would have it, but it seems to be telling us something.

Whatever the precise price tolerance, the bearish end game is in view for those persuaded by the analysis above, with the capitulation either imminent or occurring sometime around May.  For the spring trajectory to hold true, expect to see further rallies higher being progressively rebuffed at levels further and further below $4,000.

Turning to the moving averages favoured by many price analysts indicators, there is another view abroad that market participants holding long positions probably don’t want to hear.

If we look at the 200-day and 50-day moving averages on the 1-week chart, there is an unmistakable conclusion the dispassionate observer is inclined to consider.

Since May last year, the price has not traded above the 50-day simple moving average (50MA). Bitcoin tried to break above the 50MA in July and failed. The 50MA, therefore, provides an upper price band.

For the bottom price band, we can use the 200MA on the same 1-week chart.

Low and behold, the 200MA is our support level, as confirmed by two weeks in December where the $3,170 level held. Indeed, bitcoin powered off it in the week of 17 December for an $800 gain. 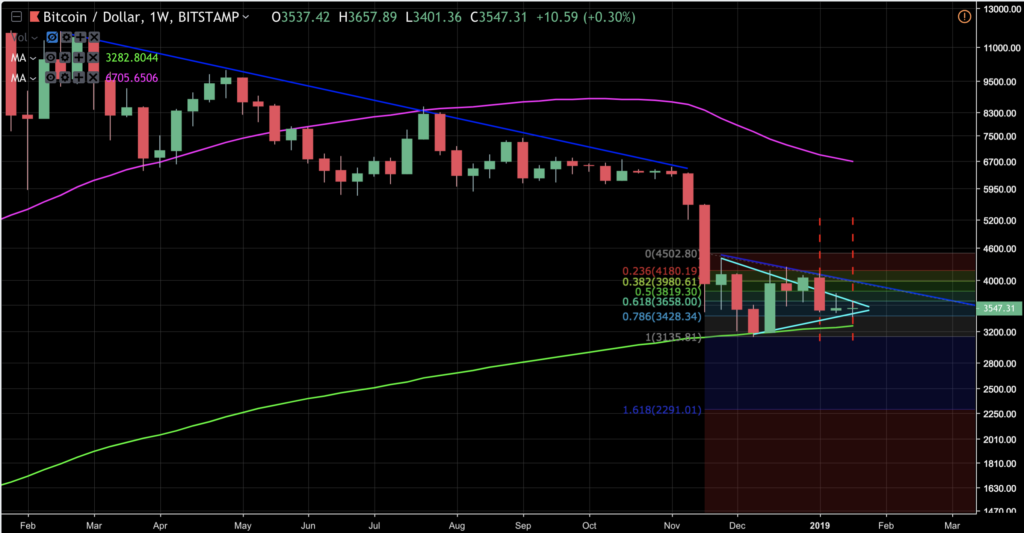 It seems reasonable to conclude that the price could bounce between these two moving averages, which would mean that the capitulation that typically characterizes the end of a bear market is not at hand. We would expect to see the two bands converging, with a crossover signaling a bullish inflection point for the BTCUSD market.

That happy circumstance may not materialize until some time after May – perhaps not until early next year.

That, at any rate, is the view of respected derivatives and bitcoin trader Tone Vays, as set out in a recent YouTube discussion, and many other professional traders besides.

Winter is coming… to an end

So the technical analysts are split on whether BTC goes into the $2,000s (or even $1,800 by the most bearish forecasters, excluding those who think it will go to zero because it has no intrinsic value), bottoms at $3,170 or whether it is fated to trade in the $6,000-$3,200 range for the rest of the year before the final capitulation arrives.

The latter interpretation would be great for traders taking shorts and longs. However, for those hoping for the end to the ‘crypto winter’ soon, it could be a disappointment, although prices in the $6,000s would still be a near 100% gain on the year lows at $3,170.

However, technicals alone rarely tell the whole story and with the transaction fundamentals of bitcoin holding firm despite the sell-off and the regulatory and institutional landscape set fair for positive developments, hodlers still have reasons to be cheerful.