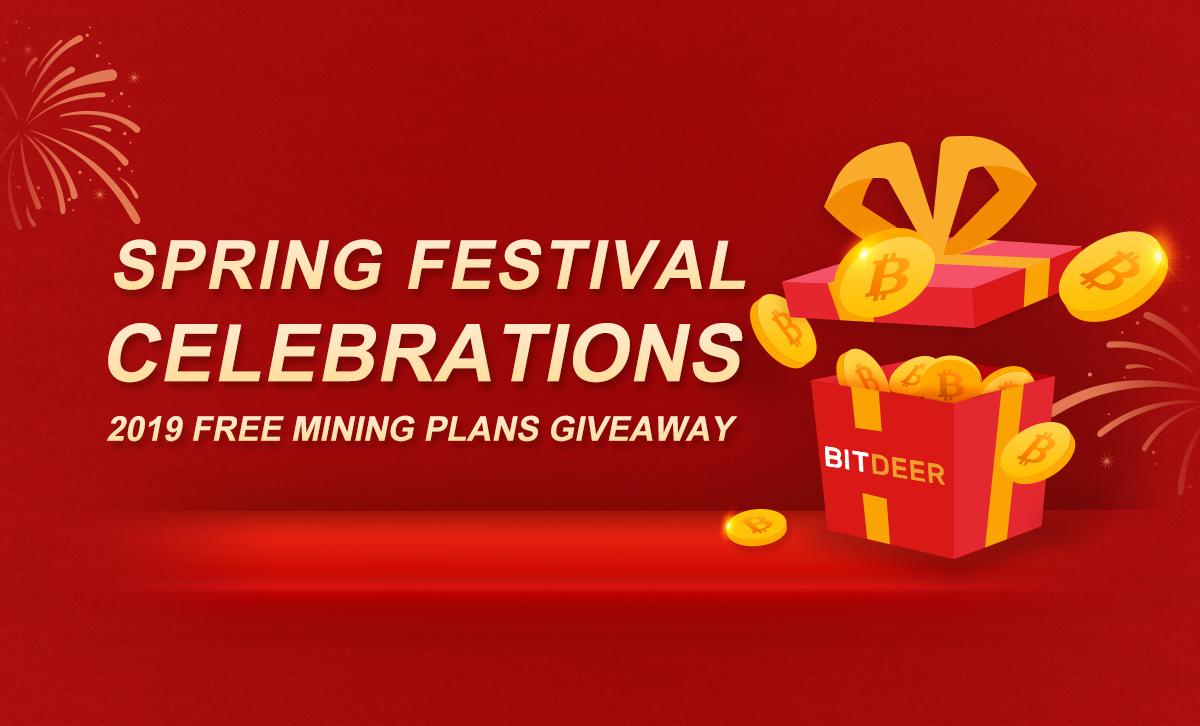 SINGAPORE – Leading computing power-sharing platform BitDeer.com has just announced a set of new promotions in celebration of the Spring Festival, featuring a give-away of over 14,000 red envelopes of BTC rewards and free Bitcoin mining plans.

Officially launched on December 12th, 2018, BitDeer.com has since gained immense popularity among the global crypto mining community, despite the trenches of the crypto bear market. The platform is proud to provide a transparent, reliable, convenient, and flexible computing power-sharing service to users around the world.

Spring Festival is a joyous holiday celebrated throughout Asia as a time to spend with family and friends. During the festival, people gift each other red envelopes in hopes of passing on good fortune. In appreciation for the support from its worldwide users, BitDeer.com is happy to show its gratitude and best wishes by gifting red envelopes to the global individual miners’ community.

This 12-day celebration is kicking off on January 31 (Beijing Time). Users can visit BitDeer.com to claim a set amount of red envelopes every day:

BitDeer.com has also unveiled the generous prizes within the red envelopes:

During the celebration, BitDeer.com will also be increasing the rewards for its popular “Invite A Friend to Receive Bitcoin Bonus”promotion by doubling the bonus incentive. People who invite new users during this time, will enjoy a Bitcoin bonus equal to 4% of the payouts from the first purchase of the invited new user, and the invited new user will receive an extra reward as well.

Recent reports from J.P. Morgan claim the production-weighted cost per bitcoin averaged just above $4,000 worldwide in Q4 2018, and thus Bitcoin is no longer worth the mining cost. However, some Chinese mining operations have had the ability to mine Bitcoin at around $2,400 per unit, due to favorable agreements they had made with local electricity generators.

Through a strategic partnership with BTC.com and AntPool, most of BitDeer.com’s mining equipment is housed and operated by the world’s two largest cryptocurrency mining pools’ designated facilities in China. Consequently, while competitors are putting an indefinite hold on the sales of mining plans, BitDeer.com is able to continue providing global individual miners with flexible plan durations, competitive pricing, and low maintenance fees.

Within two months, BitDeer.com has achieved explosive growth with website traffic surpassing 1.2 million visits and over 50,000 daily active users. The leading computing power-sharing platform now has customers from over 165 countries, and more than 40% purchase orders are placed by users originating from the U.S.

BitDeer.com is the world’s leading computing power-sharing platform, enabling global users to mine cryptocurrencies in a transparent, reliable and convenient way. It saves users from the complicated process of purchasing, installing, and hosting mining machines. Individual miners can enjoy the service with just one click.