Details of the Bithumb Hack

Bithumb announced on Wednesday, 20 June 2018 that $30 million in cryptocurrency had been stolen from its coffers. As at the time of writing this article, the platform hasn’t specified the coins taken from the platform. However, the Sentinel Protocol, a team that focuses on online hacking and scams, said that Ripple (XRP) was among the coins stolen in the attack.

[Notice for the temporary suspension of the deposits]
Due to the increasing safety issues, we are changing our wallet system.
Please do not deposit until we notify.
*All deposits are not deposited into your wallet until all changes are completed.

[Notice for the suspension of all deposit and withdrawal service]

We checked that some of [our] cryptocurrencies valued about $30,000,000 was stolen. Those stolen cryptocurrencies will be covered from Bithumb, and all of [our] assets are being transferred to [a] cold wallet.

Timeline of the Hack

The exact time the hack occurred is unknown at the moment. However, Bithumb reportedly moved a significant amount of Ether tokens to its offline wallet. This decision was due to some unusual activity regarding unauthorized access to its online wallets. The platform announced a server check on June 16 – lasting from only a few hours. However, the server check, which was to upgrade Bithumb’s security protocols, exceeded the scheduled few hours.

At precisely 00:53 UTC on June 20, 2018, Bithumb disabled deposits on the platform. The exchange service also began to move all coins stored in online wallets to more secure offline wallets to prevent more theft.

Bithumb plans to compensate users affected by the hack – they intend to cover all the losses. The platform is the sixth-largest in the world, with an average daily trading volume of almost $400 million, according to CoinMarketCap.

Second Exchange Hack in As Many Weeks

Less than two weeks ago, reports emerged of another hack on a South Korean-based cryptocurrency exchange platform. This time, it was Coinrail, a relatively smaller exchange service. The Coinrail hack coincided with a significant dip in the prices of cryptocurrencies, with Bitcoin losing $1,000 in a matter of hours. Thus, some experts declared that the hack was responsible for the decline.

However, the consensus among most experts is that the recent investigation by the U.S. government on suspected price manipulation activities in the market as well as the expiration of Cboe Bitcoin futures contracts was the likely cause of price reduction. Still, the frequency of cryptocurrency exchange hacks is something that will leave many traders worried.

Before the Bithumb hack, the market appeared to be recovering as it gained more than $12 billion in total market capitalization. There seemed to be signs of an emerging bull run as Bitcoin stayed above the $6,700 mark. However, since the news of the hack emerged, Bitcoin dropped $200, eroding all the gains of the past few days.

At the time of writing this report, most of the top 100 coins have declined in the past few hours, presumably due to the Bithumb hack. 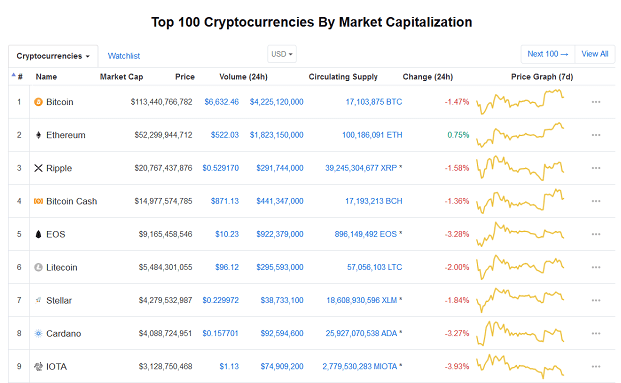 Do you think the Bithumb hack will cause a massive dip in the prices of cryptocurrencies? Keep the conversation going in the comment section below.