Block.one has announced the launch of the EOSIO blockchain software. The release of the open source EOSIO 1.0 was revealed via a blog post on the company’s website on June 2, 2018. EOSIO is touted as a revolutionary decentralized protocol for both enterprise and community applications. The EOSIO launch also coincides with the establishment of a $50 million partnership between Block.one and SVK Crypto.

These appear to be exciting times for the EOS movement as a whole with the mainnet launch and now the release of the EOSIO blockchain software. EOSIO can operate without the need for accompanying digital token assets. However, the program can also be configured to allocate resources via market fees, voting, or staking protocols. Thus, EOSIO can be implemented for both public community-focused blockchains and corporate enterprise blockchain solutions.

EOSIO is designed to use either of two Web Assembly engine configurations – Binaryen and WAVM. According to Block.one, EOSIO encompasses the following design features:

EOS is currently experiencing a marked increase in price. The token is now up by more than 16 percent in the last 24 hours according to CoinMarketCap. Much of that increase occurred during a four-hour period on today, June 2, 2018. 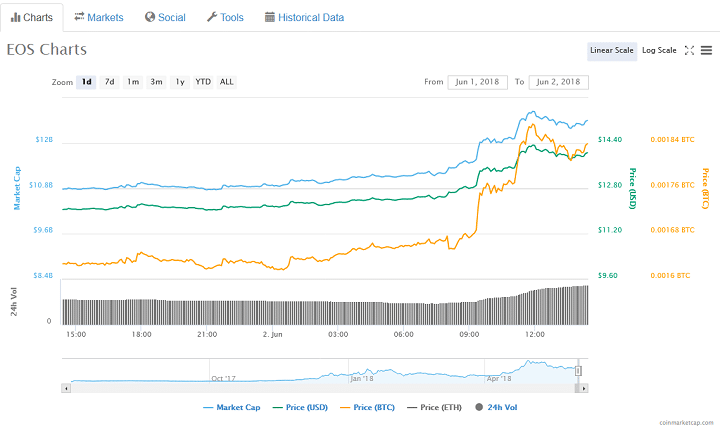 A few Words of Caution

While launching EOSIO, Block.one provided a few words of caution for potential users. The blockchain program is presented “AS IS.” Thus, users must take care to verify the viability of the companies that build protocols on top of EOSIO before interacting with them. The company also urged developers to take note that the third-party libraries used are provided in “AS IS” conditions as well. Block.one bears no liabilities for any damages that might occur while using the EOSIO blockchain software.

In a related development, Block.one has also announced a $50 million partnership with SVK Crypto. The collaboration aims to develop useful applications built on the EOSIO blockchain software.

Commenting on the partnership, Brendan Blumer, the CEO of Block.one said that:

Working with a market-leader such as SVK Crypto is a positive step as we grow the impact and footprint of the EOSIO developer ecosystem. This fund further strengthens our top-notch roster of VC partners focused on identifying and fostering projects that are building a decentralized, open future.

The $50 million partnership is the fifth funding round carried out via Block.one’s EOS VC initiative. According to the announcement, SVK will be in charge of the funds. Speaking on the collaboration, Hugh Cochrane, the co-founder of SVK said that:

Block.one has created the world’s most powerful infrastructure for decentralized applications and is the most forward-thinking company driving growth in the blockchain space. SVK Crypto is thrilled to partner with Block.one to establish a fund that enables developers to thrive. We look forward to helping to produce innovative game-changing DAPPs in the coming months and years.

Will Block.one’s EOSIO blockchain software contribute to taking EOS tokens “to the moon?” Do you think the partnership between Block.one and SVK Crypto will create more use-cases for the EOSIO blockchain? Keep the conversation going in the comment section below.

Images courtesy of Block.one and CoinMarketCap.