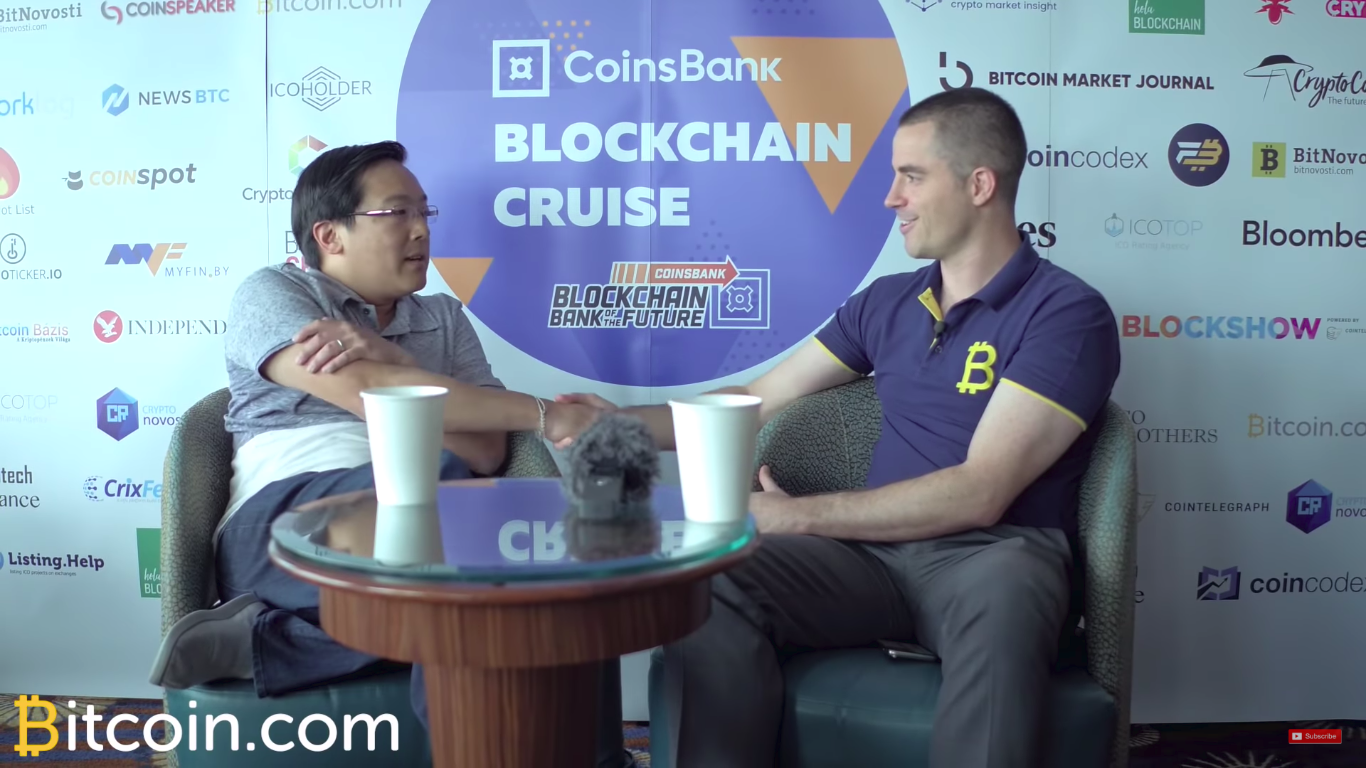 In a video published on October 4, Roger Ver, CEO of Bitcoin.com and recognized promoter of Bitcoin Cash held a debate with Litecoin’s Charlie Lee about the possibility that Lightning Network can provide the solutions that the Bitcoin Blockchain requires to be a globally accepted crypto with the benefits of traditional fiat transactions.

Lightning Network is a “second layer” payment protocol that is being developed to guarantee almost instantaneous transactions with minimal fees, converting Bitcoin (BTC) into a cryptocurrency that allows for minimum value transfer operations in real time.

In an extract of the full debate published on Youtube by the official channel of Bitcoin.com Roger and Charlie talk in the Coinsbank Blockchain Cruise. During the interview, Charlie Lee was quite supportive about Bitcoin and the development of Lightning Network.

At the beginning of the debate, Roger Ver asked him if he agreed that people are currently hostile to the use of Bitcoin because they considered that “buying coffee with Bitcoin is stupid.” This critique commonly used by Bitcoin Cash Supporters seeks to base the superiority of bitcoin cash on the fact that it supports low-value transactions because its token is cheaper and fees are lower. Charlie Lee clarified that concept:

They say buying Bitcoin on-chain is stupid … People are working on LN which is helps Bitcoin scale to second layer solutions, so it is still Bitcoin … they are not hostile to using Bitcoin.

While giving his argument, Roger Ver interrupted him to ask if he considered LN as a P2P solution:

Roger: – Is it a peer to peer system when you are using a Lightning Network?

Charlie: – Sure, It’s actually more peer to peer than bitcoin

Roger: Tell me why is it peer to peer when I have to connect my lightning node to yours, to his, to his .. to make a payment

Neither Bitcoin (BTC) Nor Lightning Network Can Censor You

Regarding the issue of censorship, a few minutes later Roger Ver commented that there was a person who created a Node named “Roger Ver” and nobody wanted to connect to it. This situation -although funny- was seen as a potential danger by Mr. Ver who believes it is another proof of censorship. To this, Lee responded:

Charlie: That’s just as ridiculous as saying all the were censoring your transaction because they know it’s you … That’s because somebody created a node with your name and decided not to connect with anyone … It’s not because he was censored from connecting … It’s because someone made a joke on you by creating a LN node called Roger Ver and decided not connect to…

-Roger: (Interrupting Charlie) So they successfully censored somebody from participating?

-Charlie: No, he censored himself

Charlie was emphatic in clarifying that Lightning Network is a work in progress and is not ready yet, however, there are currently several users willing to try such an implementation. Faced with this, Roger Ver proposed a bet:

Roger: I’ll bet you that in 18 months from now there will be less than a thousand merchants in the world accepting LN payments for physical goods … If I’m right you can wear a Bitcoin Cash shirt, and we’ll do a little video about what happened … and if I’m wrong, and there’s more than a thousand shops accepting LN I’ll wear a LN, Blockstream shirt or whatever shirt you want, and we can talk about how I was wrong…

Charlie Lee accepted the bet. Roger Ver culminated this section of the debate by saying “In all honesty” that he hoped he was wrong because, in the end, LN’s success could represent one more step in the direction of the world he is promoting.

In the social networks, some users commented that Roger already seems to have lost the bet. Just a few days ago CoinGate announced that more than 4,000 affiliate customers could accept LN Payments. In CoinGate’s official blog, Dmitrijus Borisenka, Co-Founder and CEO of CoinGate expressed emotion at the welcoming received by the implementation of payments via LN:

“We were pleasantly surprised when we came across tweets of our Lightning Network implementation at the Kasbah Bar in Oslo. You may have heard critics claiming, ‘you can’t buy coffee with Bitcoin.’ Well, we’re not sure about coffee, but buying beer with Bitcoin within a second for zero fees is definitely possible in Oslo.”