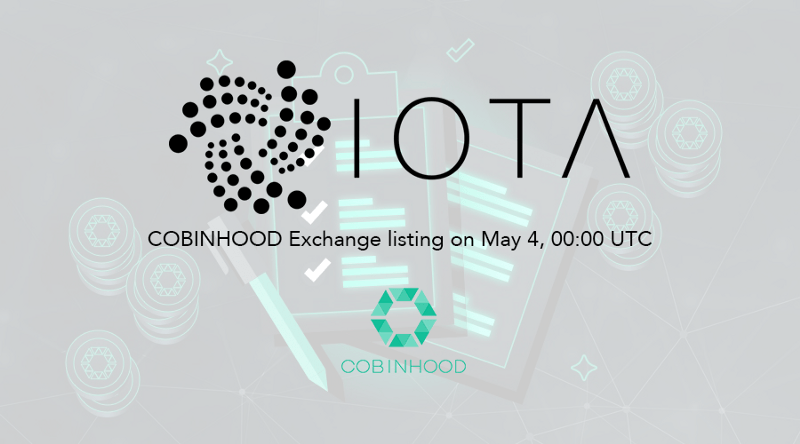 IOTA is disrupting the nooks and crannies of the world with the waves of developments, creating a lasting impression in the mind of people. Courtesy of the altcoin’s zeal to rule the crypto verse with it progressive expansion, IOTA is preparing to be named on a new exchange, COBINHOOD, after the exchange went live on its Twitter page to announce that it will be listing IOTA on its platform.

The exchange, on its Medium page, made a broad clarification on the listing.

In a statement tagged “Finally, IOTA on COBINHOOD!”, Coinhood said it will be listing IOTA (MIOTA) on its platform for deposit and trade by May 4, 2018.

“Depositing and trading IOTA with BTC, ETH, and USDT trading pairs will be live on May 4th, while withdrawing will be enabled two weeks after listing (this post will be updated with the exact date),” the statement reads.

The statement which aired the coming up of another event flagged “Upcoming Contests & Airdrops” stated that IOTA (MIOTA) will be the first coin that will feature on the exchange for the month of May.

While IOTA seems to be moving around the world with series of development lately in order to fight for its position in the market, the altcoin continues to give more and more reason to pay attention to its expansion.

Recently, in a release, it was made known that the altcoin and its team were granted a major boost with the introduction of the head of Central Europe business at Fujitsu’s connection, Dr Rolf Werner, into IOTA foundation.

At present, Werner is the Chairman of Fujitsu Technology Solutions GmBH Board, and Fujitsu is rated one of the first-class information and communication technology (ICT) company in Japan, specialized in presenting technology products, solutions, and services to the world.

In another developmental note, IOTA was granted the privilege to present at the biggest industrial trade shows in the world, which will took place in Hannover Messe, Germany. The event will hosted bigwigs world tech giants, top people in the tech industry and potential investors in innovations, giving the altcoin the opportunity to sell its ideas to the audience.

Conclusively, IOTA is becoming more and more formidable in the market today and it is making a difference in the industry. IOTA’s unrelenting effort could take it anywhere.