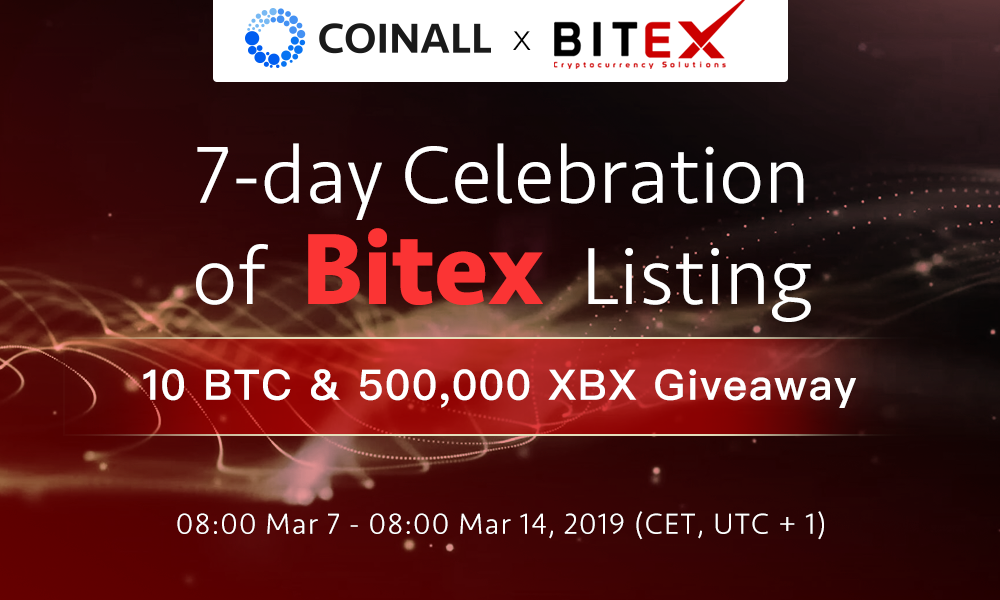 On March 7th, CoinAll Exchange (www.coinall.com) officially listed the XBX token of Bitex, a well-known cryptocurrency financial service provider, and launched a week-long campaign to give away 10 BTC & 500,000 XBX to users.

Bitex provides hyper-localized crypto-banking services through their global platform, including currency exchange and banking infrastructure such as BitexPay, Bitex Atm, Bitex Debit Card and so on.

CoinAll general manager Katherine Deng said that CoinAll is committed to excavating global projects with high quality and potential around the world. Bitex demonstrates the infinite possibilities of cryptocurrency in everyone’s daily life.

Bitex’s listing campaign lasts from March 7th to 14th, and traders will have a chance to share 10BTC+500,000 XBX airdrops by deposting,  trading, team invitation and community activities. All users can log in to the official website to participate. The promotion is unprecedented.

Bitex has also been in the limelight recently. Bitex in co-operation with Japans tech giants for POS implantation for over 30,000 stores in Japan and over 50,000 locations worldwide will bring enlightment to BitexPay and BitexPay Debit Cards where users may use up to 20 Different Fiat and hundreds of Cryptocurrencies for their payments. Its financial business progressed rapidly and Bitex has become a provider of bitcoin payment solutions in the Asia sector including Bitcoin trading volume leader Japan.

In addition, Bitex’s EZBitex platform which is obtaining legal licenses for operations in eight countries and regions, including Singapore, the Philippines, Thailand, South Korea, Japan, Indonesia, the United Arab Emirates and Hong Kong have already rolled out their partnership strategy with the local partners and authorities. The XBX, which is now listed on CoinAll, is the token used in all trading scenarios of EZBitex. XBX token utilizes a unique design that not only powers the banking infrastructure but also rewards user loyalty while cultivating a robust developer ecosystem, users may also stake their tokens on the EZBITEX platform for earning MBX tokens which will then be swapped for XBX tokens. Bitex aims to make a difference in the Crypto Sector where it believes partnership rewards is a key in playing the role to success..

Recently, CoinAll has cooperated with many star projects, including COSMEE – first dApp partner of Samsung,  BitTorrent of TRX, and the crypto-banking giant Bitex.

Katherine Deng said: “Blockchain solutions companies such as Bitex that create infrastructure of blockchain industry are our ideal partners. Bitex demonstrates the infinite possibilities of cryptocurrencies in everyone’s daily life. This in-depth cooperation with Bitex make us more expectant about the future of our cryptocurrency era.”