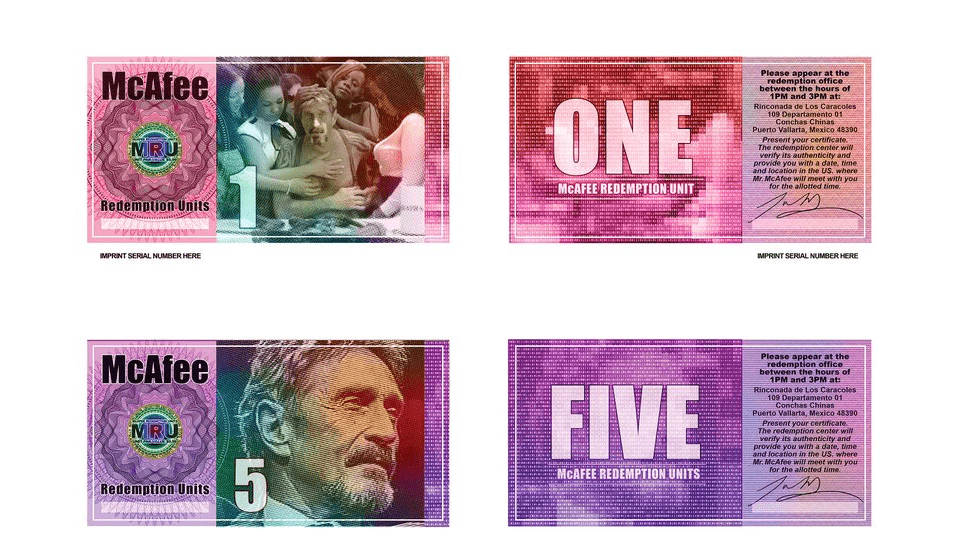 The cryptocurrency world is witnessing somewhat impossible message after respected crypto Dad, John McAfee twitted that his own coin regarded as McAfee coin is on its way. The coin, according to the crypto pundit is going to be a fiat currencies backed by crypto.

However, there seems to be more to this announcement. It is expect that McAfee comes out to give more insight on the new concept tomorrow night as he stated.

“@SmartPayMINT sent this. What’s odd is that tomorrow night I am going to make an announcement of the new “McAfee Coin”, based on a radical new concept: Fiat currencies (collectible) backed by crypto – the reverse of what banks are attempting. Seriously.”

Another tweet by the cryptocurrency lord reflected that the McAfee coin will be surfacing in 26 days time. The digital coin is coming in form of Fiat currency since it is going to be printed on paper.

“No hoax. The “McAfee Redemption Unit” is real and coming in 26 days. The graphic is low res – don’t want to give much away yet. Printed on currency paper, holographs on both sides, serialized, linked to the blockchain, redeemable, convertible, collectible”

Have You Heard About John McAfee Effect?

Crypto analysts strongly believe that McAfee tweet is so powerful that it can result in a boom for cryptocurrency, and as well, it can turn out to be a FUD depending on what the tweet is centered on.

Talking about the cryoptocurrency world, there is no tweet as powerful as McAfee’s.

On many occasions, a “single tweet has resulted in more than a million dollars of investment into an ICO, and multiple currencies have increased more than 100% in price from a single tweet”.

Considering McAfee’s 828,000 direct followers on Twitter, McAfee has the potential to reach millions of cryptocurrency supporters.

Interestingly, due to the number of followers and the power of his tweet, John McAfee Charges $105,000 Per Tweet For Promoting Cryptocurrency Projects.

“Banks have already declared war on us by denying us the ability to purchase crypto with credit cards. One of the opening statements rings true with many since the credit card blockade four months ago. US and UK banks first initiated a ban and many exchanges implemented disproportionate fees by classifying credit card purchases as cash advances.”

He posits further that, “SEC is trying to abscond with crypto by treating them as securities, we are at war. A call to action follows with the first step being to write to your congressman. While this isn’t an option for most crypto traders the next piece of advice certainly is. We still live in an age where fiat is used for most transactions and payments. As a result we need to change from crypto to fiat and vice versa and we need a compliant bank in order to do this. If customers go into their banks asking why this is not possible and threaten to change banks to one that allows crypto-fiat deposits, then the bank has to take notice if complaints are high enough in numbers.”