The gaming industry is a multi-billion-dollar global opportunity for crypto, and we aren’t just talking about CryptoKitties and betting dapps.

At the cutting edge of the mash-up of crypto and gaming are crypto projects Decentraland and Enjin.

As this story was being written the news broke that both projects’ tokens had been included in Coinbase’s latest clutch of assets it is exploring for possible listing.

That’s a major vote of confidence (or a crazy decision on Coinbase’s part, as some of my colleagues here at EWN have suggested) regarding both the strength of their technology offerings and adoption trajectory. [update – MANA has been listed on Coinbase Pro]

However, the two projects are very different beasts, as we shall see.

For the new breed of crypto investors that places a premium on fundamentals rather than obsessing over speculative price potential, they deserve attention.

Decentraland is one of the sector’s strongest projects

Decentraland, founded by Argentinian Esteban Ordano, is a decentralised virtual world in which you can buy parcels of LAND sized 10m x 10m. The currency of the world is MANA. It is launching its second LAND auction next week (10 December) and there are only 9,350 parcels up for grabs. Total parcels in the world are capped at 90,000.

The first LAND auction saw 34,356 parcels sold for a total of 161 million MANA but 9,331 were not sold. It was in the first auction that the layout of Genesis City was established. The SDK is in alpha release with the full launch happening early next year.

Over 161 million MANA was spent on LAND during the first auction, amounting to roughly $30 million at the time (it finished in January 2018). However, after the conclusion of the auction there were still 9,331 LAND parcels left unowned, so now there’s a second chance to join the LAND rush.

The project has just done a deal with Binance in which 1,875,000 MANA and one Binance-branded parcel of LAND is available to the lucky winners of the competition the partners are running.

Binance Coin (BNB) is one of a growing list of currencies that can be used to purchase LAND in the auction.

The latest cryptoasset to join that list is dapp platform Zilliqa’s ZIL token. Dai and MKR are also among the coins accepted in the auction.

LAND owners are free to build whatever they want on their land, although the game developers are coding filters so that users can choose not to see what they might consider undesirable content.

EWN reached out to Ari Meilich, project lead of the blockchain-powered virtual world, which, unlike Second Life from the earlier days of the internet, cannot be closed down by a centralised owner.

“Binance has about 10 million users, and very popular social accounts – so naturally a lot of new people started following and engaging with our project,” says Meilich.

“We are currently announcing other major crypto projects to the auction, and the interest continues ramping up.”

The web client for non-LAND owners to explore the world launches in the first quarter of 2019.

The project raised $25 million in its initial coin offering last year and has attracted investment from Boost VC and UK-based Fabric Ventures.

BUIDL and they will come

3D-world coders and artists are excited by the opportunities the platform offers.

One of those is Sam Clare who was featured in a BBC Stories video report that is well worth viewing, as is a fly-through of Clare’s work referenced below.

“To be honest I haven’t done anything in regards to my Decentraland parcel. I have read up on and gotten myself comfortable with babylon.js [the project’s SDK was originally using Three.js] and will build something when DCL launches,” he told EWN.

At the moment, then, Clare is honing his skills in readiness for the launch and it’s another crypto-infused world that has his attention.

“I have mainly been developing on my Cryptovoxels [another virtual world on the Ethereum blockchain] parcels as that is live and development for that has been rocketing recently.  I have a fair few parcels.

“You can visit my crypto punk shop at www.cryptopunk.shop and one of my galleries at www.samsplace.space. I also built the BLUP parcel, 8bit Nintendo hommage and the Ministry of Smiley Faces.”

Clare says he will be holding on to his Decentraland LAND for some time to come or at least until it hits a valuation of 10 million MANA. He bought his parcels for $900.

Enjin is on fire

Enjin is an altogether different proposition. It is positioning itself as a one-stop shop for game publishers who want to implement blockchain tech and for gaming communities looking to add value to their ecosystems by leveraging the Enjin Network.

The Enjin Network has an impressive 20 million users with 250,000 gaming communities onboard.

The project has just inked a deal with Titan Flight Studios in which it will be integrating Enjin’s ERC-1155 Ethereum-compliant token into its ReBounce game.

EWN asked Simon Kertonegoro, vice president of marketing at Enjin, when gamers would be able to get their hands on the product.

“There’s no specific launch target but they’ve advised us that they could complete the integration within a month, that would include the launch of an item sale and the marketing that goes with it.”

Titan will use Enjin’s tech to help it roll out what it calls “high-velocity esports games” for other companies.

At the heart of both Decentraland and Enjin is the Ethereum-compliant non-fungible token (NFT) standard ERC-721 that came to prominence with CryptoKitties.

The popular ERC-20 token standard is fungible, meaning each unit is the same as another and are therefore interchangeable.

Non-fungible tokens are important for gaming because each token is different and as such can be used to identify individual difference. In other words, NFTs are essential for representing unique items, be it CryptoKitties collectibles or other digital items in game worlds.

Gamers will immediately appreciate the importance of NFTs, but let’s spell it out for those of you who think Discord is something to do with chaos and not a core part of the growing gaming communities, along with Twitch.

In-game purchases and trading is booming

In-game purchases are mushrooming as gamers splash out on items used in gameplay –swords, helmets, blasters, outfits… you name it.

And it doesn’t end there. There’s also a secondary market in the virtual items, with gamers increasingly looking to trade their items with fellow fans of their favoured game in a niche, if that’s the right word, thought to be worth as much as $50 billion, according to WAX.io. The most expensive virtual item was a virtual planet that sold for $6 million.

Skins are one of the most sort-after of virtual items as they change the appearance of characters in entirely unique ways.

Add to that the fast-growing eSports space where gamers come together to watch the best-of-breed compete and the opportunity is even more enticing for the crypto disrupters.

Keeping track of who owns what, the provenance of a particular item, tracking its value and providing a venue for trading and more, all requires not just a currency but a ledger that records all of the above in real-time.

In a nutshell, trading in-game digital assets is difficult and complicated.

You guessed it, that’s where crypto comes in.

Statista estimates that by 2020 consumers will be spending $32 billion on in-game purchases.

Add mobile, PC and console gaming revenues together for 2017 and it comes to a massive $108.4 billion, according to SuperData, and that’s not including virtual reality, augmented reality and eSports.

Think about tracking all the individual weapons in World of Warcraft (100,000 of them), for example. Some of them are much like all the others but others will have unique attributes such as strength and health built up over many hours of gameplay etc or a character that has honed its skills by passing through ascending levels of difficulty.

From a performance aspect storing all that information on blockchain may not be efficient, especially when it comes to real-time transactions between multiple players.

For Decentraland that’s not so much of a problem, at least for the auction.

“Unlike our first auction, there’s no bidding in this one, so at most there will be a total of about 9,350 transactions, which at Ethereum’s current throughput (half a million per day, roughly) is more than manageable over the course of a few days,” Meilich explains.

Building on the parcels should not pose a performance problem either.

For Enjin ERC-721 was not good enough so they developed their own token standard – ERC-1155 – that encompasses both fungible and non-fungible digital assets. It was developed by co-founder and chief technical officer Witek Radomski, as reported by EWN in July.

The standard is taking off says Kertonegoro because of its performance gains:

“We have 12 upcoming games that have publicly announced their adoption of our tools after signing up for our early adopter program (EAP).

“These games are in development and blockchain is being integrated using our tools, as we speak. We also have many more games that have signed up for our EAP and are getting ready to announce.”

Kertonegoro explains that aside from setting up websites, launching a multifaceted wallet and Enjin Beam, its QR code airdrop system, the heart of the network are the tools for managing the properties in digital worlds.

“ENJ’s core purpose is to be used to create digital assets. It functions as a resource/material that is placed inside ERC-1155 tokens, granting access to our tools.

“Most ERC-1155 tokens that currently exist are made using our ecosystem and therefore contain Enjin Coin.”

The metrics are impressive: “There are 4,722,968 ENJ currently locked inside items and we haven’t even released our development tools to the public yet,” says Kertonegoro.

“Once we release the Unity SDK and our co-marketing campaign alongside Unity goes out to their 4.5 million game developers, we expect to gain a lot more traction,” he adds.

It’s a currency too and coming to gift cards soon

The Enjin coin has increased in popularity as its utility value grows.

“ENJ can also be used as a currency. It is definitely the most used currency when it comes to purchasing ERC-1155 tokens peer-to-peer. If you take a look at any of the following Telegram channels you will see thousands of trades happening with ENJ as the currency of choice. https://t.me/erc1155_collectibles – https://t.me/catsinmechs – https://t.me/warofcrypto – https://t.me/NineLivesArena– https://t.me/cryptofightsgroup etc.”

The lesson here is that adoption creates liquidity and that’s how projects will survive and thrive – not by overpromising and then failing to deliver a product.

Enticingly, Kertonegoro says ENJ will soon be “a currency of choice on a Gift Card site where users will be able to use BTC, ETH, ENJ, and LTC to purchase gift cards for 200+ companies such as Amazon, Nike, Uber, iTunes, Google Play etc.”

“We are also working out a deal to integrate our coin into a crypto payment gateway that will enable any online business to accept ENJ with ease.”

Although we should perhaps all stop fixating on token prices, it is worth noting that most altcoins are down 80-90% or more, that’s not the case with either MANA or ENJ.

The relative stability seen in the MANA price chart is notable.

In fact Decentraland is one of only 10 crypto projects that is down less then 85% this year.

No wonder Coinbase is considering listing both of these coins (MANA has just been listed on Coinbase Pro). Game on. 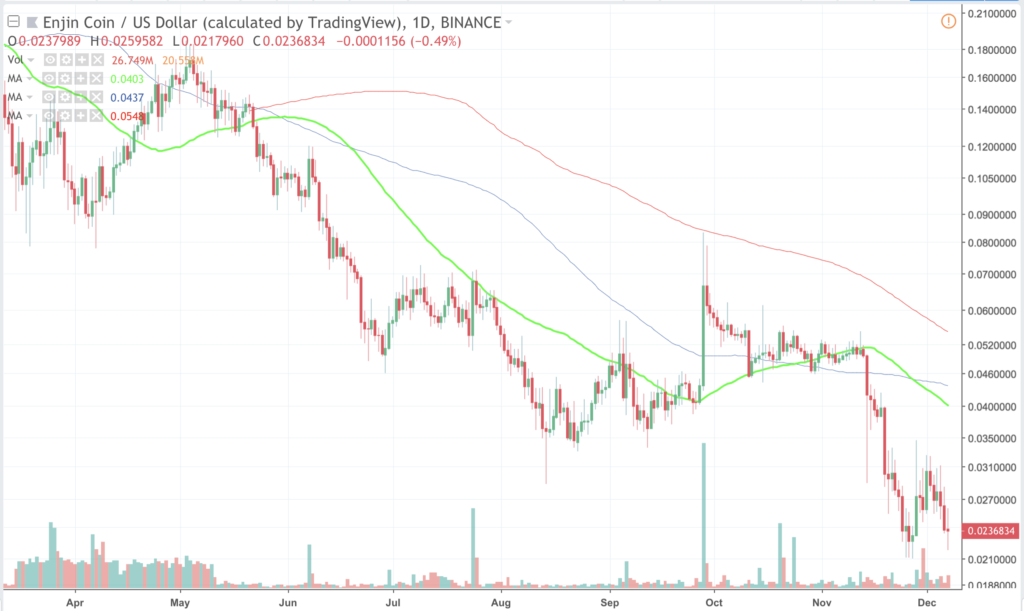 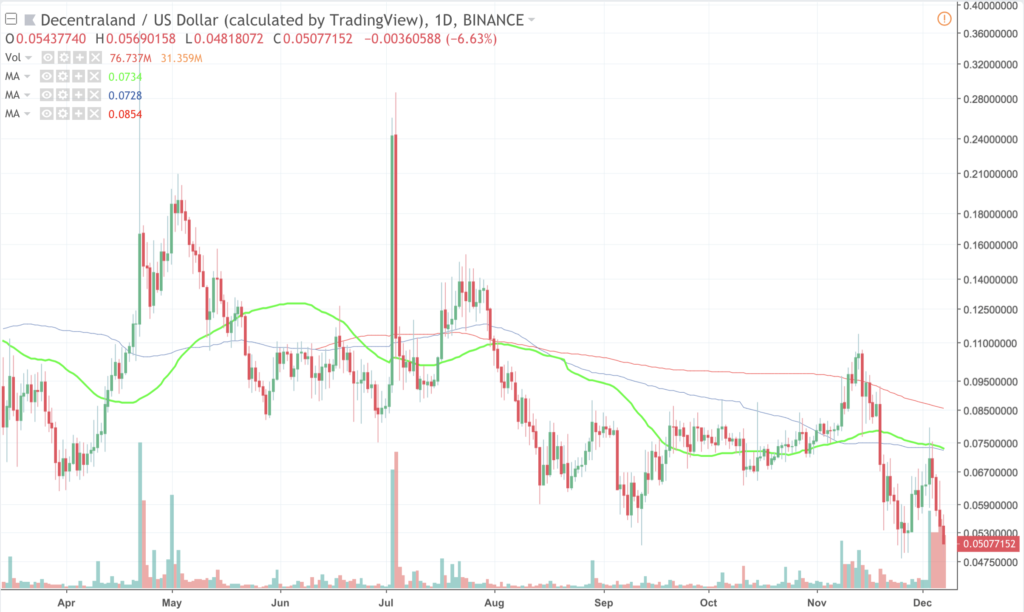