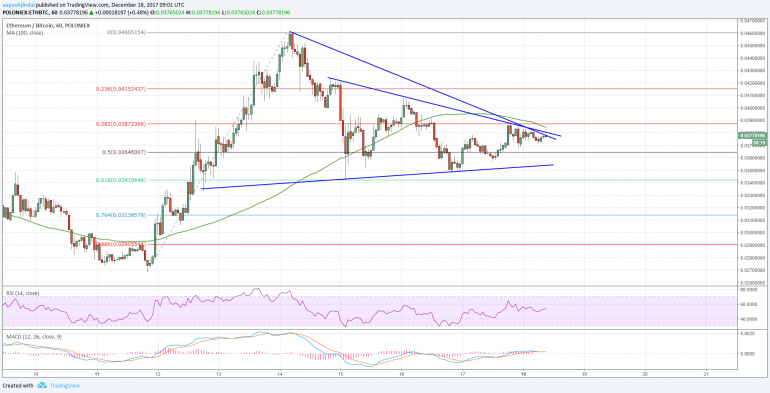 ETH/BTC Forecast: Ethereum To Break This Vs Bitcoin?

Ethereum price is slowly moving higher against bitcoin. ETH/BTC is attempting an upside break above 0.0390BTC to gain bullish traction.

After a major upside run, Ethereum price faced sellers near the 0.0460BTC resistance against bitcoin. The price started a downside move and traded below the 0.0400BTC and 0.0380BTC support levels.

There was a break below the 50% Fib retracement level of the last wave from the 0.0270BTC low to 0.0460BTC high. However, the 100 hourly simple moving average and the 0.0350BTC support protected further declines.

It seems like there is a contracting triangle pattern forming with support at 0.0350BTC on the hourly chart of the ETH/BTC pair. The pair is moving higher and once it breaks the triangle resistance at 0.0390BTC and closes above the 100 hourly SMA, it could gain bullish momentum.

Above 0.0400BTC, the pair could easily move toward the last swing high of 0.0460BTC. However, there are even possibilities of it moving toward the 0.0500BTC level as well.

On the flip side, if ETH/BTC fails to move above 0.0390BTC, it will most likely test the triangle support at 0.0350BTC. Any further declines could be a game changer for Ethereum in the short term as the price could decline back toward 0.0300BTC.