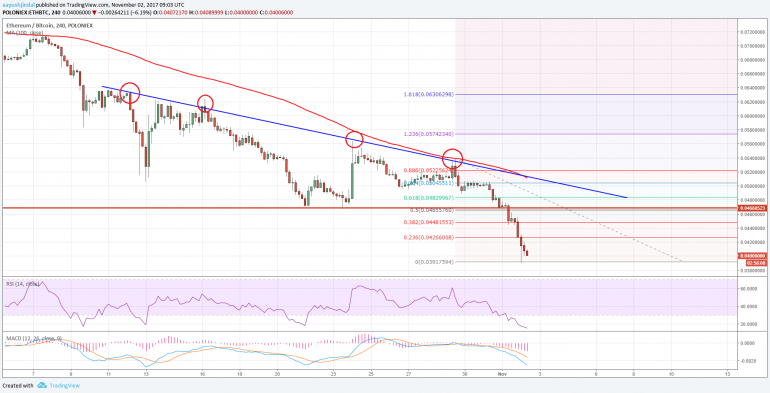 Ethereum price tumbled against bitcoin and moved below 0.040BTC. ETH/BTC remains in the sell zone with resistance at 0.046BTC.

There was an attempt by Ethereum price to gain bids above 0.052BTC against bitcoin. However, the price failed miserably and started a downside move below 0.050BTC. The decline was very strong and he price even failed to hold the 0.045BTC support area.

Sellers even succeeded in breaking the 0.040BTC handle and a low was formed today at 0.0391BTC. Buyers seem to be struggling to hold losses and an initial resistance on the upside is around the 23.6% Fibonacci retracement level of the last drop from the 0.054BTC high to 0.0391BTC low.

It won’t be easy for buyers to take the price higher as they face a lot of hurdles near 0.045BTC and 0.046BTC. The most important resistance is at 0.046BTC, which was a previous support. It also coincides with the 50% Fibonacci retracement level of the last drop from the 0.054BTC high to 0.0391BTC low.

Therefore, any correction from the current levels is likely to face strong selling interest near 0.046BTC and 0.048BTC. Only a proper close above 0.050BTC and the 100 SMA (4-Hour) would negate the current bearish bias.

On the downside, the 0.040BTC level is a short term support. Below 0.040BTC, the gates would open for further declines may be toward 0.036BTC. At present, the H4 RSI for ETH/BTC is near the oversold levels, which might ignite a correction towards 0.045BTC or the pair might start a consolidation above 0.040BTC.